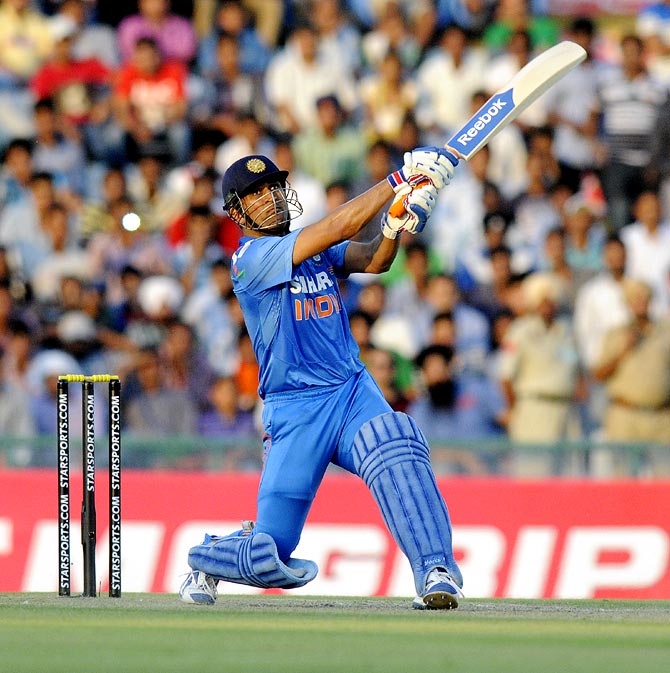 Statistical highlights of the third cricket One-dayer between India and Australia in Mohali on Saturday night.

# Mahendra Singh Dhoni became the third batsman to aggregate 5000 runs as captain for India in ODIs, joining Mohammad Azharuddin (5239) and Sourav Ganguly (5082). His feat of reaching 5000 runs in 127 innings is the fastest, having taken 127 innings. Ganguly took 136 and Azharuddin 151.

# Dhoni's unbeaten 139 is his sixth century as captain - his ninth overall and the second against Australia.

# Dhoni's superb unbeaten knock of 139 is the third highest by number six batsman in ODIs - the highest being 175 not out by Kapil Dev vs Zimbabwe at Tunbridge Wells on June 18, 1983.

# Dhoni has established a record for the highest individual innings at PCA Stadium, Mohali, eclipsing the 134 by Abraham de Villiers for South Africa vs Netherlands on March 3, 2011.

# Dhoni became the first Indian batsman to post a century at Mohali, eclipsing Sachin Tendulkar's 99 vs Pakistan on November 8, 2007.

# Dhoni and Ravichandran Ashwin have shared a stand of 76 - India's highest seventh-wicket partnership against Australia in India in ODIs.

Consistent Kohli is top run-scorer for India in ODIs 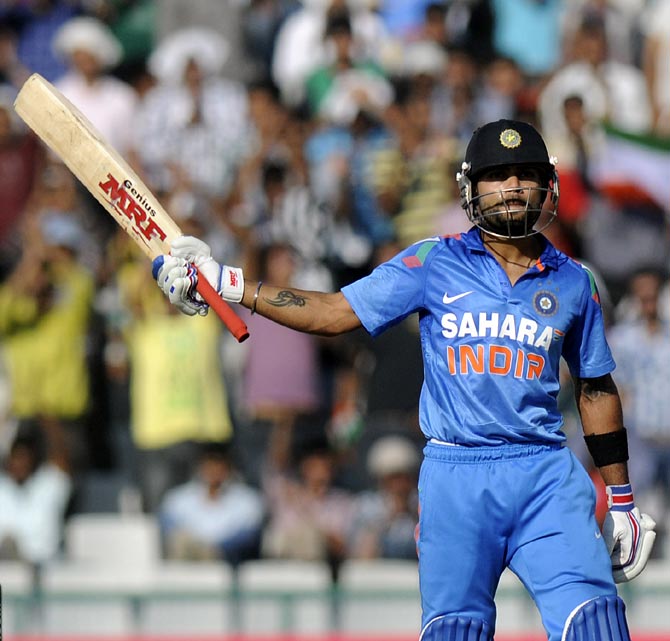 # Kohli has registered his fourth consecutive innings of 50-plus in ODIs - 68 not out against Zimbabwe, 61 against Australia at Pune; 100 not out at SMS Jaipur and 68 at PCA Stadium, Mohali. # Faulkner registered six sixes in his innings – the second highest by number eight batsman in ODIs, next only to the seven by Abdul Razzaq for Pakistan vs Zimbabwe at Sharjah on April 3, 2003. New Zealander Lance Cairns had recorded six sixes vs Australia at MCG on February 13, 1983.

# Faulkner has been adjudged the Man of the Match for the first time in ODIs.

# Adam Voges' unbeaten 76 off 88 balls is his highest score vs India in ODIs - his first half-century against India and the fourth overall. The knock is his highest on foreign soil.

# Faulkner and Voges were associated in a partnership of 91 (unbroken). The partnership is Australia's highest for the seventh wicket in a winning cause against India in ODIs. 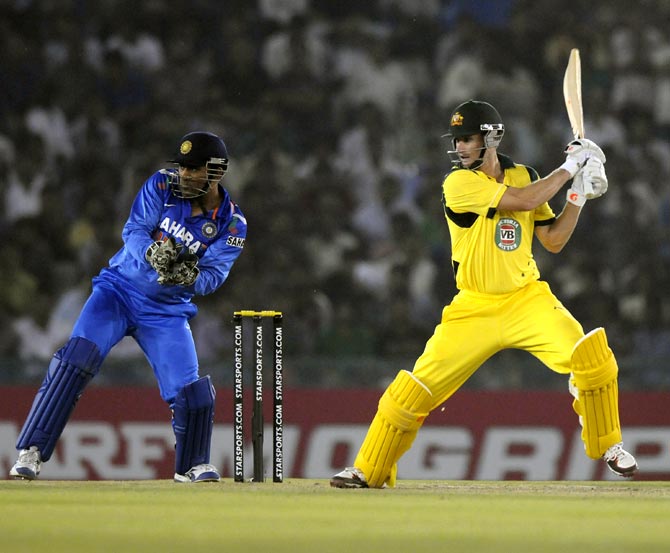 # Australia became the first team to record 300 or more in consecutive innings against India in India in ODIs – 304 for eight at Pune; 359 for five at Jaipur and 304 for six at Mohali.

# Australia have successfully chased 300 or more vs India for the first time in ODIs.

# Haddin is the second Australian wicketkeeper to take five catches in an innings twice. Adam Gilchrist has achieved the distinction nine times - a record in ODIs.

# Mitchell Johnson, with his four for 46 has established a record by a visiting bowler on Indian soil.  He is the first visiting bowler to register six four-wicket hauls in Asia in ODIs, eclipsing the five each by Brett Lee and Courtney Walsh.

Ishant Sharma conceded 30 runs in an over 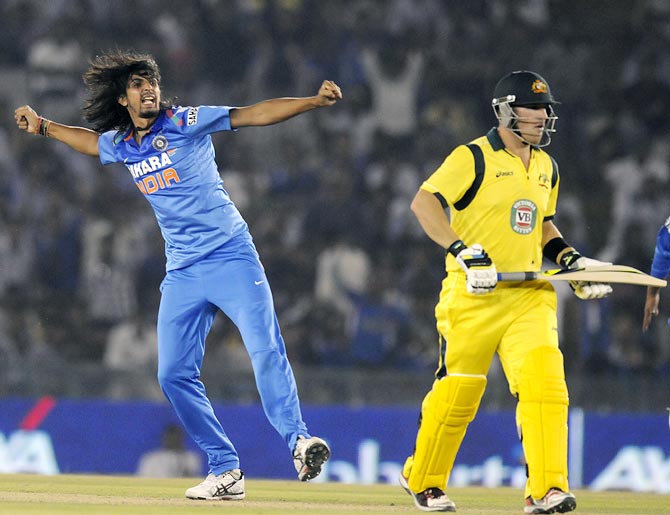 # In Indian innings, 155 runs could be added after the fall of the fifth wicket - the second highest aggregate for the last five wickets for India against Australia in ODIs behind the 167 vs Australia at Colombo (RPS) on August 28, 1999.

# Ishant Sharma has recorded an unwanted feat by conceding 30 runs in an over, emulating a dubious distinction for conceding most runs in an over by an Indian bowler in ODIs. Yuvraj Singh had conceded 30 in an over to Dimitri Mascarenhas (England) at The Oval on September 5, 2007.