Sri Lanka Cricket is mulling to call back its players who have been warming benches in the ongoing Indian Premier League for preparations for next month's Champions Trophy, its secretary said on Saturday.

"The SLC executive committee meeting on May 9 will discuss the issue. We hope to talk to the IPL authorities," SLC secretary Nishantha Ranatunga said. 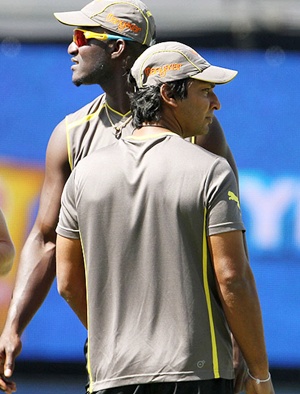 Chairman of Selectors Sanath Jayasuriya said earlier in the week that he wanted to call back the players who mostly have spent time at the benches in the IPL teams to return to Colombo in order to play in the practice games.

He said the national squad members would play in a series of practice games at Pallekele in Kandy from May 18. They will turn out for the Combined XI, Sri Lanka A and Rest of Sri Lanka.

Pallekele, in the cooler climes of Kandy, was picked to simulate the cold English conditions.

At the moment, Mahela Jayawardene, Thisara Perera, Sachithra Senanayake and Lasith Malinga have commanded regular places in their franchise teams in the IPL.

Kumar Sangakkara, Tillakaratne Dilshan and Sri Lanka's Champions Trophy captain Angelo Mathews have from time to time found themselves dropped from their respective franchise teams due to erratic form.