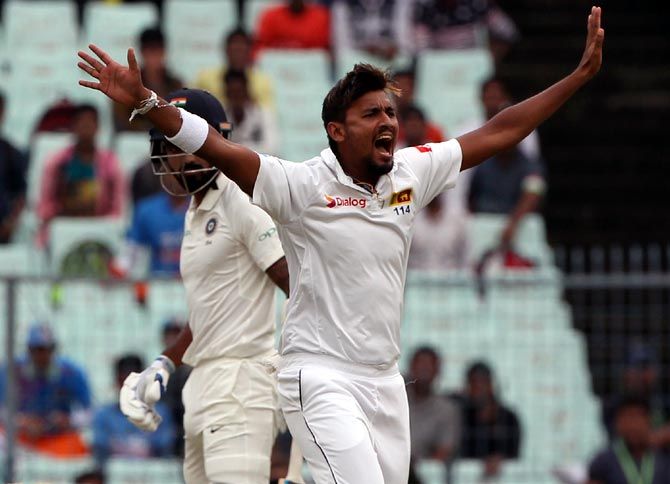 IMAGE: Suranga Lakmal appeals for the wicket of KL Rahul on Day 1 of the 1st Test at Eden Gardens in Kolkata on Thursday. Photograph: BCCI

Sri Lanka pacer Suranga Lakmal wrecked the high-profile Indian top-order in overcast conditions to leave the hosts reeling at 17 for three on a rain-affected opening day of the first Test at the EdenGardens in Kolkata on Thursday.

Lakmal's sensational spell, in which he struck thrice without conceding a run in six overs, saw him remove opener Lokesh Rahul on the first ball of the match after play began three and a half hours late due to wet conditions.

His other two victims were Shikhar Dhawan (8), who played a loose shot in testing conditions, playing onto his stumps, and India captain Virat Kohli (0), who was trapped in front off a ball that came in sharply.

Bad-light and rain led to multiple interruptions before umpires decided to call off the day's play with just 11.5 overs being bowled.

In the second over after tea, skipper Kohli was trapped, anticipating an away delivery when the ball sharply cut back in.

Kohli went for the review but was given out on umpire's call to bring his innings to an end with zero from 11 balls.

Cheteshwar Pujara was unbeaten on eight after playing 43 deliveries in an anxious stay at the crease with Ajinkya Rahane at the other end.

Bad light and rain meant only an hour's play was possible in the day.

The first session was washed away due to drizzle and wet outfield, and the second session began at 1.42 pm -- play was possible only for 43 minutes.

The post-tea period began at 3.30 pm and there was no change to India's score in the session but the Lankans added the prized-wicket of Kohli in the 17-minute session.

Dinesh Chandimal won the toss and opted to bowl under overcast conditions as Lakmal made full use of the Eden green top.

Relishing the conditions, Lakmal produced an unplayable delivery that pitched on middle-stump line and went away to take a feather’s edge off Rahul’s bat.

It was an agonising end for Rahul's streak of seven successive fifties. He was picked in the eleven ahead of Murali Vijay but fell to a beauty.

But luckily for the most dependable India batsman, the ball which darted back in went inches above the middle stump.

Touring here for a Test series for the first time since 2009, Sri Lanka have lost 10 matches and drawn six as they search for a maiden win on Indian soil.