'The committee debated the use of 'Umpire's Call' for LBW decisions made via the Decision Review System, which some members felt was confusing to the watching public, particularly when the same ball could either be Out or Not out depending on the on-field umpire's original decision.' 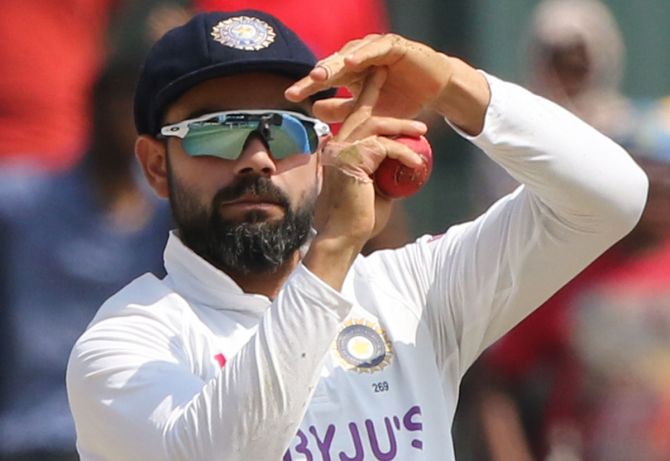 IMAGE: India captain Virat Kohli asks for the DRS review during the first Test against England in Chennai. Photograph: BCCI

The umpire's call primarily comes into the picture if a review has been sought for leg before wicket. In a situation where the umpire has ruled not out, even if the ball is shown to be hitting the stumps on review, the TV umpire has no powers to change the decision.

While some members felt that it would be simpler for the viewers if the original decision was disregarded on review, other members expressed satisfaction with the current system.

"The committee debated the use of 'Umpire's Call' for LBW decisions made via the Decision Review System, which some members felt was confusing to the watching public, particularly when the same ball could either be Out or Not out depending on the on-field umpire's original decision. They felt it would be simpler if the original decision was disregarded on review, and that there was a simple Out or Not out, with no Umpire's Call," the Marylebone Cricket Club said in a statement.

Recently, the umpire's call in DRS came under a lot of criticism when Joe Root's leg before wicket decision was not overturned on review. India took the review after Root was ruled not out by on-field umpire Nitin Menon.

The Engish skipper was stuck in his back pad and certainly looked plumb. The ball tracker showed that the ball was hitting the stumps, but the impact was just outside the off-stump and hence, the third umpire had to stick to the on-field call of not- out.

'That's the plumpest LBW I've ever seen given not out by DRS,' Mark Waugh tweeted, adding, ' Problem is the DRS went with the umpire's call for not out for a caught behind not LBW.'

'DRS has got it wrong against Joe Root. He is plumb and ICC has to look into this. The technology is not 100 per cent. Root would be happy to have got away with that,' Mark Butcher tweeted.

"The 'hitting zone' of the stumps would still be retained, which had to be hit by at least 50% of the ball for an Out decision. If such a protocol was introduced, they felt it should also include a reduction to one unsuccessful review per team, or for the relevant review to be lost irrespective of its outcome. Other members were satisfied with the current system, feeling that it was important to retain the human element of the on-field umpire's decision, which takes into account the 'benefit of the doubt' that has existed in umpires' decisions for many years. They felt that supporters did understand the concept of 'Umpire's Call'," it added.

Also, the MCC committee felt that International Cricket Council should provide the same technology for all international cricket, rather than relying on the host broadcasters' own agreements. It also felt that the TV umpires should look at replays from a neutral perspective, rather than trying to see if there is evidence to overturn the on-field decision.

"The committee felt that the soft-signal system worked well for catches within the 30-yard fielding circle, but that catches near the boundary often left the umpires unsighted. It was proposed that, for such catches, the on-field umpires could give an 'unsighted' instruction to the TV umpire, rather than the more explicit soft-signal of Out or Not out," MCC said.

The MCC will embark on a global consultation on whether the law relating to short-pitched deliveries is fit for the modern game, considering the risk of injury to batsmen.

"The committee heard that MCC is to embark on a global consultation on whether the Law relating to short-pitched deliveries is fit for the modern game. As Guardian of the Laws of the game, it is MCC's duty to ensure that the Laws are applied in a safe manner, a viewpoint consistent across all sports. With research into concussion in sport having increased significantly in recent years, it is appropriate that MCC continues to monitor the Laws on short-pitched bowling, as it does with all other Laws."

"...The committee discussed the Law and were unanimous that short-pitched bowling is a core part of the game, particularly at the elite level. There was also discussion on other aspects of the game at all levels which may mitigate the risk of injury. They agreed to provide feedback during the consultation, which will begin with a survey that is due to be distributed in March 2021 to the specific groups identified to partake in the exercise," it added.