'There are three formats and if Virat is feeling overloaded, maybe they should try somebody else for the T20 format.' 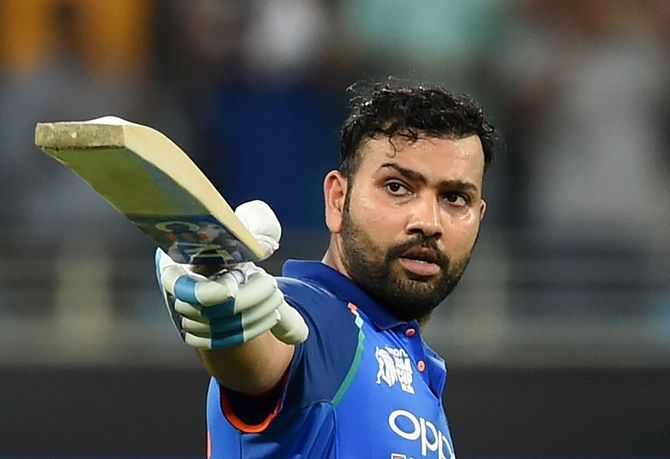 IMAGE: India vice-captain Rohit Sharma has been the most successful captain in the IPL, leading Mumbai Indians to four titles. Photograph: ICC/Twitter

Former India cricketer Yuvraj Singh suggested that Rohit Sharma can be considered for captaincy in T20s, if Virat Kohli feels "overloaded" by leading the side in all three formats.

Rohit, the vice-captain of India's limited-overs sides, has been the most successful captain in the Indian Premier League, leading Mumbai Indians to four titles and Yuvraj said it won't be a bad idea for India to try out split captaincy to ease the workload of the best batsman in the world.

"Earlier there used to be just two formats -- ODI and Tests, so it was perfect to have one captain. Now there are three formats and if Virat is feeling overloaded, maybe they should try somebody else for the T20 format. Rohit has been a very successful captain," Yuvraj told Aaj Tak news channel on Friday.

"I don't really know. They (team management) have to decide how much workload Virat can take. Do they need to try somebody else for T20? It completely depends on how they want to go for the future. Virat has been the best batsman. How to manage his workload? It is completely team management's call."

Yuvraj also took a dig at the team management for getting the crucial No 4 position wrong in the ICC World Cup in England earlier this year.

"You need to identify who is your best talent and then back him. The highest score in the No 4 position at the World Cup was 48. The captain, coach and the selectors should have known that No 4 is a very important position, especially in England where the ball seams," he said.

"The No 4 batsman has to be technically strong. Vijay Shankar didn't have that experience, Rishabh Pant didn't have the experience. Dinesh Karthik was an experienced guy who was sitting out and suddenly went to bat in the semi-final."

He said any cricketer needs a sense of security to excel.

"I really didn't understand what the think-tank was doing. If you had to get the best out of a player you have to secure him. A player can never play well if he is insecure. That was the big reason why India didn't win the World Cup," Yuvraj said.

Do you think Rohit should replace Kohli as India's T20 captain? Have your say in the poll below.