'I think they played with a lot of character in the end, they pulled through'

'They improvised really well and it came off for them, they showed real character, they showed guts, they tried a few things and they deserved to win' 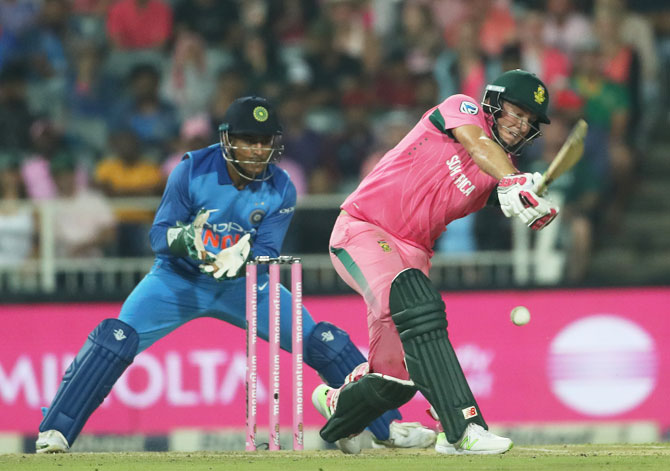 IMAGE: South Africa's David Miller went after the bowling during the 4th ODI in Johannesburg in South Africa on Saturday. Photograph: BCCI

India captain Virat Kohli has rued his team's misfortune but admitted that South Africa were the deserving winners during their five-wicket win in the fourth ODI in Johannesburg.

With their tail up in the series following a 3-0 lead, India went into Saturday's game as favourites but twin weather breaks coupled with a few missed chances brought a halt to their rampaging ODI run as South Africa kept the series alive.

"In hindsight, you have to give credit to South Africa. I think they played with a lot of character in the end, they pulled through. They deserved to win," Kohli said after Saturday's weather-hit and curtailed ODI.

"They are a quality side, we expected them to play quality cricket and they played well. We know we'll have to be at the top of our game to get another win under our belt and we'll work extremely hard for that," he added.

Opting to bat, Shikhar Dhawan and Kohli were going great guns before lightning first stopped play when the visitors were placed at 200 for 2. Although no overs were cut, India lost the momentum and only finished at 289 for 7.

Another rain break, later during South Africa's innings, forced the match to be reduced to 28 overs with the hosts set a revised target of 202.

Kohli also noted how conditions had worked against his team as India scored just 89 in 16.3 overs after the first break of play.

"After the break when Shikhar and Jinks (Ajinkya Rahane) came off the wicket played a bit differently, it wasn't as good to bat after the break," he said.

"After the lightning break the guys felt with the weather getting cooler, the wicket got faster in the evening, and that continued through the innings, so I don't think the guys quite settled in in the later half."

Kohli felt the curtailment of the match helped South Africa.

"The game getting shorter probably worked in their favour. They had to hit regardless of what the situation was. If it was a full game you never know," he said.

"It was more like a T20 game where you have to go after the bowlers and it can get difficult when people get into a groove and when a side has momentum it can be very difficult to stop them."

The India skipper also gave credit to South Africa for the way they went about their run chase.

"Especially Miller and their wicket-keeper batted very well. When we got AB I thought we were in the game, but those two guys took the game away from us," he said.

"(After the second break in play) the ball was getting a little wet, but I won't say it was too wet. The wicket was good to bat on. Our spinners were getting a little bit of turn but South Africa took their chances and it came off.

"They improvised really well and it came off for them, they showed real character, they showed guts, they tried a few things and they deserved to win," Kohli added.

The Indians also had themselves to blame as David Miller was given two lives -- a dropped catch in the deep and then was bowled off a no ball off Yuzvendra Chahal when he was on 6 and 7 respectively. He went on to make 39 off 28 balls.

"We did not grab our chances. You have to take your chances in this game. No balls are a fine line as well. We did not deserve to win, that's the way the game goes," Kohli said.

"No balls are always something that hurts you as a team but you can't be too hard on the boys. They try their best out there in the middle and mistakes do happen," he added. 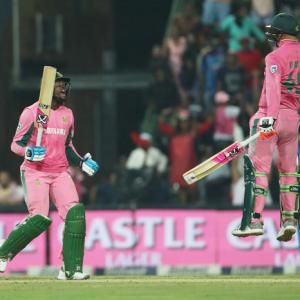