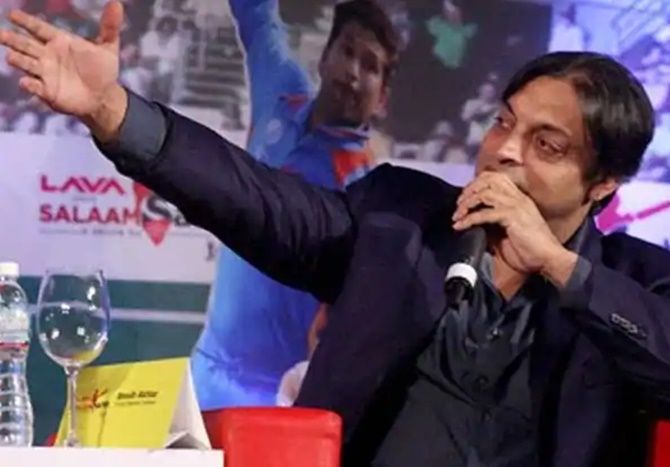 IMAGE: Shoaib Akhtar has developed a penchant for getting into controversies. Photograph: PTI

Former Pakistan pace spearhead Shoaib Akhtar has responded to the defamation notice sent to him by the Cricket Board's legal counsel Tafazzul Rizvi, calling it 'legally defective, merit-less and misconceived'.

The temperamental pacer also demanded an apology from Rizvi for trying to 'publicly humiliate, degrade, defame and ridicule' him.

"Whatever I said on my channel was for betterment off Pakistan cricket and to point out to the board where it needed to put things right. Whatever I said about Rizvi was based on my personal interaction with him," Akhtar said.

"My comments about PCB & Mr. Rizvi are expression of opinion given in public interest to point out shortcomings in PCB with hope for improvement," he tweeted.

Rizvi, the long serving legal counsel of the Pakistan Cricket Board, sent the defamation notice after, on his YouTube channel, the fast bowler called him 'inept' while criticising the three-year ban imposed on discarded Test batsman Umar Akmal.

Akmal was banned for failing to report corrupt approaches.

Rizvi has demanded an unconditional apology and compensation of Rs 10 million to be donated to a charity. But Akhtar has been defiant, insisting he will fight the case.

The PCB, while issuing a statement on Akhtar's video and sharply rebuking him, also made it clear that Rizvi had filed the notice in his personal capacity.

The fast bowler has developed a penchant for getting into controversies.

He recently evoked sharp response from former Indian players when he suggested a charity match between Pakistan and India to raise funds to fight the coronavirus pandemic in the subcontinent.