IMAGE: Mahendra Singh Dhoni was named Man of the Series after half-centuries in each of the three ODIs vs Australia. Photograph: Mike Owen/Getty Images

India captain Virat Kohli on Friday lauded veteran Mahendra Singh Dhoni’s commitment to the team and said batting at number five is the ideal spot for him.

Dhoni faced criticism for his slow batting in the ODI series-opener in Sydney before redeeming his pride and reputation with match-winning contributions in the Adelaide and Melbourne ODIs.

Acknowledging Dhoni's contribution in the historic series-triumph in Australia, Kohli defended the former captain, saying: "I think firstly as a team we are very happy for Dhoni. That he is amongst the runs, because it is very important to get runs under your belt to get that rhythm and get that confidence back, especially when you have not been playing so much international cricket.”

"Many things happen on the outside. People say a lot of things but as an individual we know that there is no one more committed to Indian cricket than Dhoni and people should let him have his space because he has contributed so much for the nation.

"They should let him figure out things on his own and what he needs to do. He is one of the most intelligent cricketers and he is not someone who is not aware about what needs to be done. As a team we are totally in sync with what he is doing and we are all very happy for him," said Kohli. 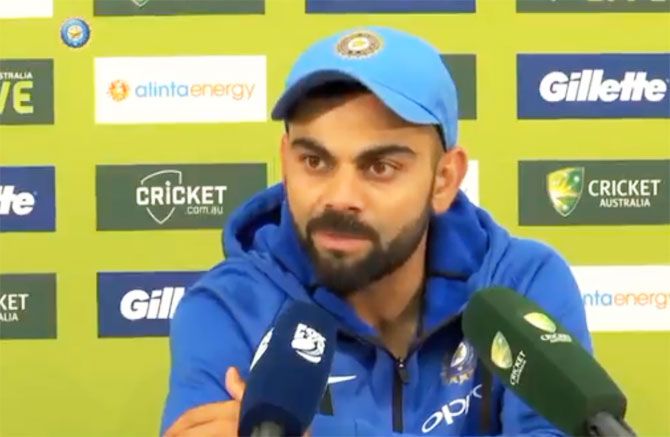 IMAGE: As a team we are totally in sync with what he is doing and we are all very happy for him (Dhoni), India skipper Virat Kohli said at the post-match press conference on Friday. Photograph: BCCI/Twitter

The skipper also reckons that the just-concluded Australia series has proved that number five is the most logical spot for Dhoni.

"Dhoni batted at number four in 2016 for a while. But after that he has been pretty happy playing at five and six for the team. We felt that number five was the ideal position for him. And if you saw him bat at Adelaide as well he was pretty comfortable in that position because that allows him to do a bit of both - get some game time as well as finish games off, attacking as and when required," Kohli said.

Dhoni, batting at number four, played a crucial role in India winning the decisive third ODI with his unbeaten 87-run knock on Friday and at Adelaide too his unbeaten half-century had scripted India's win.

"He was more himself from that game (Adelaide) on, and he built onto this knock today. We are pretty happy with the batting combination that we had in Adelaide. When someone like Hardik Pandya is not there you have to balance somehow. So a lot of things vary in that regard. But we as a team, and myself as captain, we feel that Dhoni at five is the most logical. It is the ideal place for him and the team as well," Kohli said.

India head coach Ravi Shastri termed Mahendra Singh Dhoni, "a once in 40 years player" who will be very difficult to replace once he bids adieu to the game.

"He is a legend. He will go down as one of our great cricketers. I have never seen an individual so sound. I have seen Sachin at times get angry. Not this man," Shastri told the ‘Daily Telegraph’. 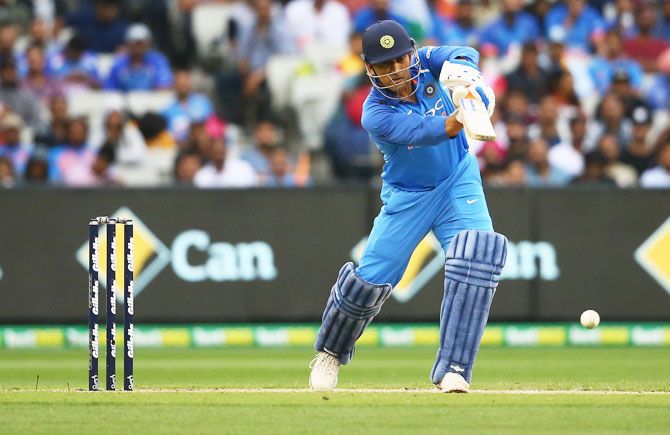 IMAGE: 'He will go down as one of our great cricketers. I have never seen an individual so sound. I have seen Sachin at times get angry. Not this man'. Photograph: Mike Owen/Getty Images

Shastri made it clear that a player of Dhoni's calibre can't be replaced.

"You can't. Such players only come once in 30 or 40 years. That is what I tell Indians. Enjoy while it lasts. When he goes you will see a void that will be very hard to fill," he said.

The coach is hopeful that Rishabh Pant would live up to the hype surrounding him but insisted that Dhoni is something else.

When former England captain Michael Vaughan asked if Pant could be Dhoni in the next 20 years, Shastri replied: "I would love to. He has the talent. His hero is MS. Every day he is on the phone with MS. I think during the Test series he must have spoken more to MS than anyone else."

It's not just Dhoni's role as a batsman that defines him but the master strategist in him that takes a lot of load off skipper Kohli's shoulders.

"That is because he has the best angle. He sees things. He is great with the guys, they all worship him. This entire team has been built by him because he was captain for 10 years. To have that kind of respect in the dressing room and experience is massive," said Shastri.

"Whether he gets a zero, gets a hundred, whether he wins the World Cup or loses in the first round, MS is the same man. He is simply consistent with his body language and composure. It amazes me how he does it. Since 2011 he has not given one interview."