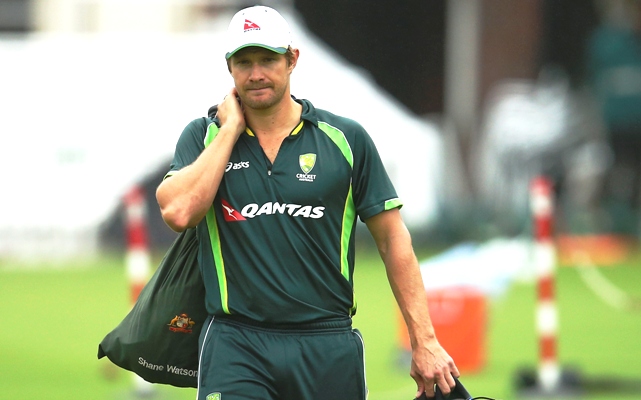 Shane Watson's international future looked bleak on Monday after the all-rounder was left out of Australia's 13-man squad for this month's one-day series against India on Monday.

The 34-year-old, veteran of 190 ODIs and part of the side that won the World Cup last year, retired from test cricket last September but had hoped to continue playing for his country in the shorter formats.

James Faulkner, recalled after missing Australia's last one-day series in England because of a drink-driving conviction, Mitchell Marsh and Glenn Maxwell were the three all-rounders named in the squad, however.

"Scott has continued to impress the selection panel, having bowled very well for Victoria this year. He certainly deserves this chance at the top level," head selector Rod Marsh said in a Cricket Australia (CA) statement.

"Joel is an exciting young left-arm bowler who swings the ball well and has bowled beautifully in the Big Bash League for the Perth Scorchers.

"He has had very good figures in short-form cricket and we really want him to make the most of this opportunity."

South Australian seamer Kane Richardson, who played eight ODIs in 2013 and 2014, was also recalled to a squad without a specialist spinner.

"Kane has had a taste of cricket at the international level and although that has been interrupted on occasions through injury we think he is ready to perform consistently for Australia," Marsh added.

Paceman Josh Hazlewood was included despite being due for a rest after playing all six Tests against New Zealand and West Indies in the Australian summer.

The series between the top two teams in the world rankings starts in Perth on Jan. 12 and takes in matches in Brisbane, Melbourne and Canberra before concluding in Sydney on Jan. 23.