The world of sports is still in shock at the demise of Shane Warne. The legendary Australian leg-spinner left a deep impact in international cricket at the highest levels with his ingenuity and determination.

Factbox on former Australian spinner Shane Warne, who died on Friday at the age of 52. 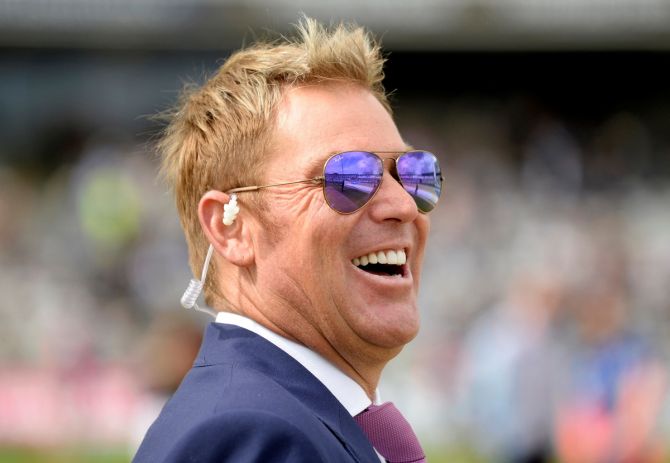 IMAGE: Shane Warne was one of the best leg-spinners to have embraced the game.Photograph: Philip Brown/Reuters

* Arguably the most famous and influential cricketer since Don Bradman, Warne is widely credited with revitalising the art of leg spin bowling after an era dominated by fast bowlers.

* Was named one of Wisden's five best players of the 20th century.

* First player to take 700 wickets, although his record was ultimately surpassed by Muttiah Muralitharan (800 wickets).

* Chosen for the 1993 Ashes tour of England a year after an unpromising test debut, Warne bowled England captain Mike Gatting with his first delivery, later dubbed "the ball of the century."

* Became the first player in over 90 years to take a hat-trick in the Ashes when he achieved the feat against England at Melbourne in 1994.

* Was fined by the Australian Cricket Board in 1995 after admitting taking money from a man associated with an Indian bookmaker for providing information about pitches and weather, but the case was hushed up for three years.

* Underwent surgery in 1998 to repair a career-threatening shoulder injury, then another operation to repair a damaged finger as the wear and tear of bowling started taking its toll.

* Relaunched his career at the 1999 World Cup and was named man of the match in Australia's victory over Pakistan in the final.

* Broke Dennis Lillee's Australian record of 355 Test wickets on tour in New Zealand in 2000 but then lost the Test vice-captaincy for sending lewd text messages to an English nurse.

* Made a miraculous recovery from injury to join the team for the 2003 World Cup but was sent home in disgrace before the tournament began after failing a drugs test. He was banned for 12 months.

* Made his return against Sri Lanka in 2004, taking 10 wickets in his first match to pass 500 Test wickets.

* Separated from his wife Simone in 2005 following media reports of his adultery before becoming the first player to reach 600 Test wickets.

* Took 40 wickets in the 2005 Ashes series and finished the year with 96 to break Lillee's long-standing world record of 85 in a calendar year.

* Bowled Monty Panesar to seal Australia's victory in the third test against England to regain the Ashes in 2006 and three days later announced he would quit international cricket at the end of the series.

* Reached the once-unthinkable 700 wicket milestone in his penultimate Test and clinched his 708th in the final Test which sealed a 5-0 whitewash for Australia.

* Finished his career with the most runs in Test cricket (3,154) without a hundred to his name, coming closest against New Zealand when he scored 99 in Perth in 2001.

* Retired from first class cricket after a season with English county Hampshire but was lured back by the riches of the Indian Premier League in 2008, signing up as captain and coach of the Rajasthan Royals.

* Led the Royals to the first IPL title against the Chennai Super Kings in a nail-biting final that went down to the last ball.

* Picked up the wicket of Rohit Sharma and led the Royals to a thumping 10-wicket victory in his final game as a professional cricketer.

* Announced his retirement from professional cricket in May 2011. He was fined $50,000 for criticising IPL officials two weeks later.