Australia will need to defy history to chase down the total and survive the wiles of Ravichandran Ashwin on a fifth day pitch. 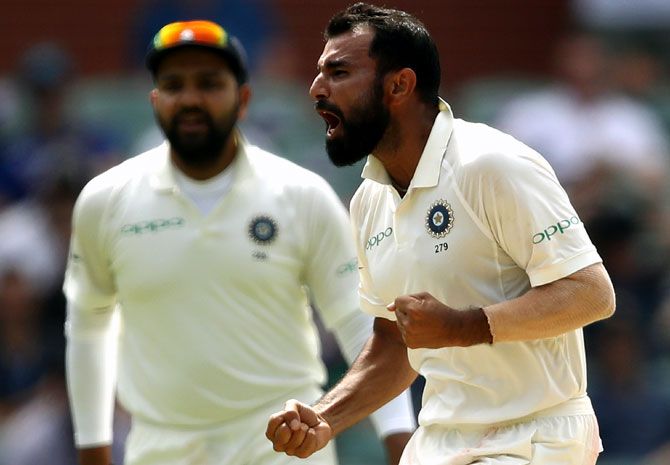 India's bowlers once again exposed the chinks in jittery Australian batting line-up leaving the hosts tottering at 104 for four in pursuit of a tough target of 323 on the fourth day of the first Test in Adelaide on Sunday.

With 219 runs required on a fifth day track, it will be an onerous job for the Australian batsmen, who have been struggling against a consistent Indian attack with their ultra defensive approach.

Ravichandran Ashwin (2/44 in 19 overs) and Mohammed Shami (2/15 in 9 overs) were impressive during the final session as Australia lost three wickets in Marcus Harris (26), Usman Khawaja (8) and Peter Handscomb (14).

After tea, Australia had an early reprieve in the 13th over when Cheteshwar Pujara failed to latch onto a tough chance at first slip from opener Marcus Harris (26) off Mohammed Shami. However, the pacer got his man a few overs later, this time wicketkeeper Pant completed an easy catch.

The big blow to Australia's dim hopes of winning this Test came when the dogged Usman Khawaja (8) was caught in the deep off Ashwin as he tried to clear mid-off.

The mistimed skier was caught by Rohit Sharma, who judged well and dived in-front to take the catch.

Peter Handscomb (14) and Marsh then added 24 runs for fourth wicket in 13.2 overs. The former had a 'life' when KL Rahul didn't latch onto a tough chance at short leg off Ashwin in the 34th over.

Three overs later the breakthrough did come when Handscomb hit Shami straight to midwicket and Pujara completed an easy catch. 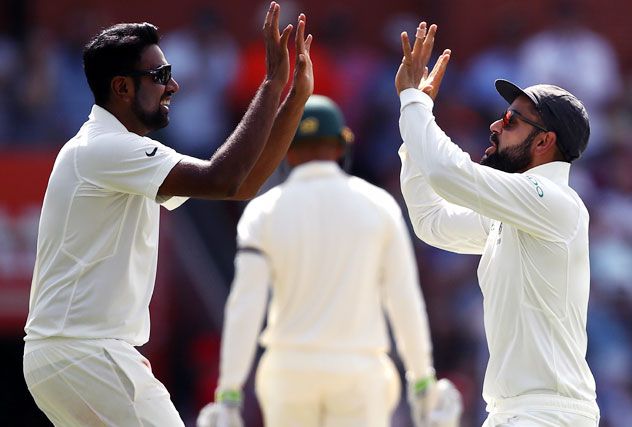 This was after India lost five wickets for 25 runs in the post lunch session to set a 323-run target The visitors were bowled out for 307 (106.5 overs) in their second innings thanks largely to some atrocious shot selection from the lower-middle order.

At tea, Australia reached 28-1 (12 overs). Aaron Finch (11), survived a loud lbw appeal on zero off Ishant Sharma (0-14) on only the second ball of this innings. He went for DRS review and the decision was turned because it was a no ball.

Ashwin though nabbed him before tea, as the ball seemed to have brushed his gloves before looping up for keeper Rishabh Pant to claim an easy catch. Replays showed that Finch had made a mistake not going for the DRS review as there was nothing on snickometer or hotspot.

Earlier, India only added 47 runs for their last five wickets after resumption of play post lunch.

It started the Indian slide. Ashwin (5) and Ajinkya Rahane (70) played uncharacteristic strokes, indicating that a declaration was forthcoming. But India never got to that point.

Ashwin was caught pulling in the deep off Mitchell Starc (3-40) while Rahane was out caught reverse sweeping. Mohammed Shami (0) was out caught first ball, wildly swinging at Lyon.

Ishant Sharma (0) was last out as India were bowled out in just 11.5 overs after lunch. Their last seven wickets cost only 73 runs.

Starting from overnight 151 for 3, India made good progress through the first session as Pujara and Rahane ground down the Australian attack with an 87-run partnership for the fourth wicket. 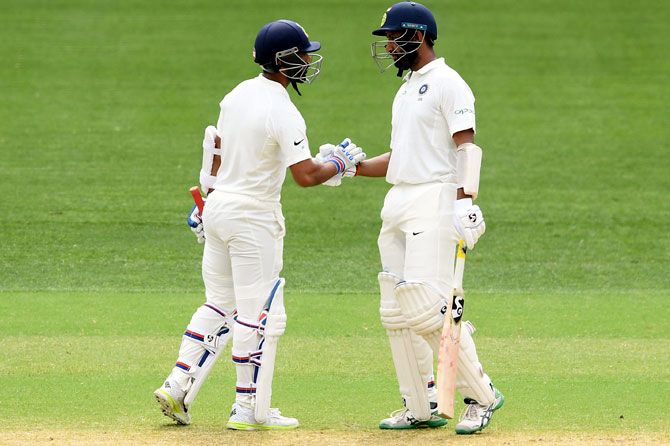 Pujara started on a positive note with successive fours early in the day's play. India's main threat came from Nathan Lyon (3-92), who was using the rough on the pitch to trouble the batsmen.

Rahane survived an appeal for a catch in the 74th over via DRS when replays showed that the bat was nowhere near the ball.

The duo continued to grind down the Australian bowling as their pacers' body language started looking tiresome. Mitchell Starc (1-34) took the second new ball as soon as it became available but was wayward at best.

Australia finally got a breakthrough with Pujara out caught at short leg, off Lyon in the 88th over as the ball looped up.

He walked off to a standing ovation from the Sunday crowd, having faced 450 balls in this match, the second-most for an Indian batsman in a Test on Australian soil after Sachin Tendulkar (525 at Sydney, 2004).

Rohit Sharma (1) came to the crease thereafter, but left quickly, caught at silly point smartly by Peter Handscomb as Lyon picked up his third wicket.

Young Pant though decided to attack and took India past 250 before lunch. At the other end, Rahane had opened up to play pull strokes off the pacers against the new ball and reached his 16th Test half-century off 111 balls. 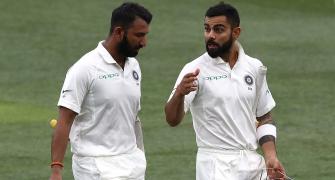 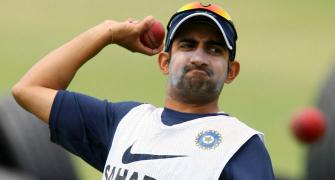 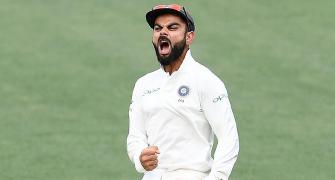 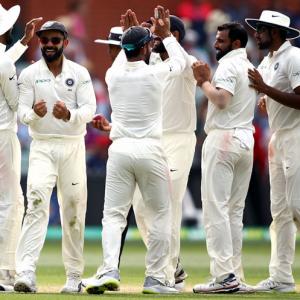 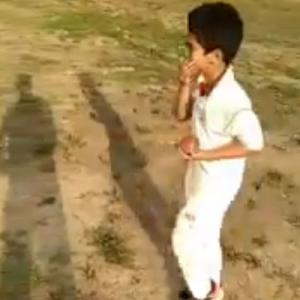