'Given a chance, I hope I can win matches for India with my batting and bowling. I hope the team can bank on me.' 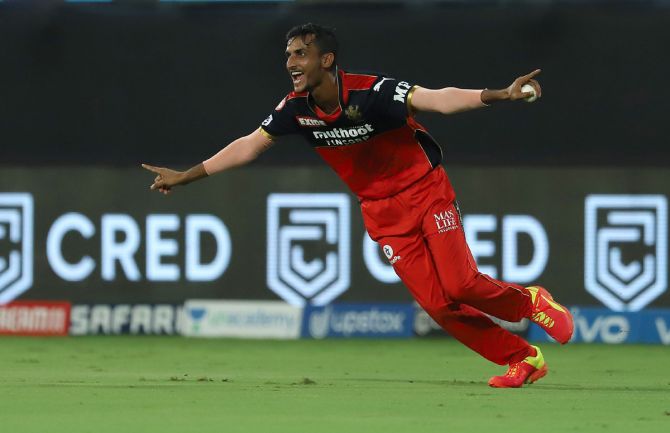 IMAGE: While he has 57 first-class, 24 List A and 39 T20 wickets at domestic level, Shahbaz Ahmed does have the ability to punch above his weight. Photograph: BCCI

Before the next game, young coach Sourasish Lahiri ran into erstwhile Cricket Association of Bengal president Sourav Ganguly at the CAB headquarters.

"Patsy (Lahiri's nickname in Bengal circle), weren't you talking about a Haryana lad from Tapan Memorial Club?" Ganguly apparently enquired from the coach and he was told that his name is Shahbaz Ahmed.

"Yes, I was checking his numbers and this guy has to be special. He scores all runs and takes all wickets for his club. Amazing isn't it? Has to be a special player. Why don't you take him for next match?," Lahiri was laughing as he could vividly recollect that conversation with the former India captain on Shahbaz.

As the Bengal all-rounder, a resident of Haryana's Mewat made it to Indian ODI team as Washington Sundar's replacement, Lahiri couldn't be more happier.

"Yesterday, we had a dinner at CAB on the occasion of Independence day and Dada (Ganguly) was laughing and telling me that, 'Remember? I told you so'. You can never question Dadi's eye for talent. He saw those numbers and became curious," said the current senior Bengal assistant coach, remembering Shahbaz smashing nearly 1000 runs each season and take 50 wickets.

"He basically dominated the club scene as an above average player and to do that playing for Tapan Memorial, a club that can hardly compete with the likes of Mohun Bagan, East Bengal or Kalighat was phenomenal,' said the former Bengal off-spinner, who in his playing days, had the distinction of getting Sachin Tendulkar out twice in a first-class game. 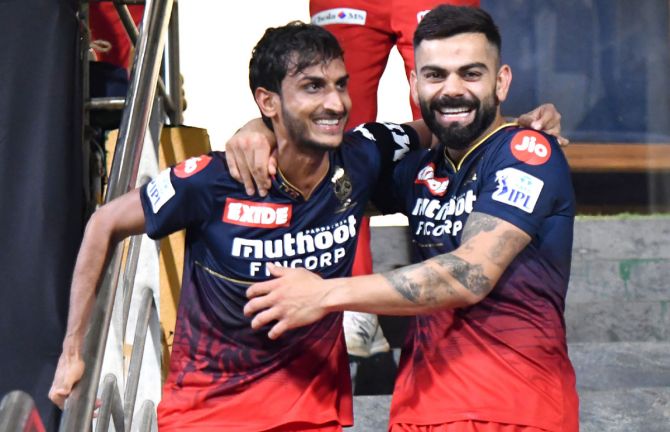 IMAGE: It is Shahbaz Ahmed's temperament under pressure for Royal Challengers Bangalore in the IPL that had caught attention of Virat Kohli and subsequently the national selectors. Photograph: BCCI

A phenomenal performer, Shahbaz was always the batting all-rounder, who has improved his slow left-arm orthodox bowling skills over the years.

His batting first-class average of 41 plus and List A average of 47 tells the story. But it is his temperament under pressure for Royal Challengers Bangalore in the IPL that had caught attention of Virat Kohli and subsequently the national selectors.

"Everybody who plays cricket wants to wear the India colours. Being called up for the Indian team is a dream come true. Whenever I have played for Bengal, I have given my all. The Bengal team believed in me.

"Given a chance, I hope I can win matches for India with my batting and bowling. I hope the team can bank on me," Shahbaz was quoted as saying in a release issued by CAB's media wing as he was being dropped to the airport by his club coach Partha Pratim Chowdhury.

Over the past decade and half, the number of graduate cricketers have decreased alarmingly and Shahbaz, with a degree in civil engineering is like a breath of fresh air.

Among the current crop of elite Indian cricketers, Venkatesh Iyer has completed his MBA and had chucked a job at a big MNC to pursue professional cricket.

"When there won't be club matches, he would back then bring his books along and used to study for his semesters. He has special fascination for trigonometry and geometry," Chowdhury, a father-figure and "local guardian" of the 27-year-old had said.

Agrees Lahiri, who feels that education does have its own advantages.

"Cricket, after the advent of T20, is more and more about situational awareness. And if you are a good student in general, it is easier to become a good student of the game. None of us can take credit for where he has reached today. He is a self-taught cricketer with an insatiable appetite for working hard," Lahiri added.

While he has 57 first-class, 24 List A and 39 T20 wickets at domestic level, Shahbaz does have the ability to punch above his weight.

Infact, having been with RCB for two seasons and working with likes of Kohli, Faf du Plessis, Mike Hesson, has certainly helped him improve as a cricketer.

"Earlier, his deliveries would not normally land on the body of the leather rather than on the seam. So he would bowl more under-cutters and those that came into right hander with the angle.

"This season at training, I saw him roll his fingers way more on top of seam and thus he seemed to be getting more rotations. When you see him at practice sessions, it seems from every session, he wants to take something extra out of each session," Lahiri said.

In recent years, he has laughed his way to the bank courtesy of the IPL but Chowdhury, who has seen Shahbaz as a teenager, knows that it's his solid upbringing and middle-class background that has kept him in good stead.

"Recently, I was surprised that he bought a car kept it in front of my house. I told him that since you are always on the road, take it back to Mewat and gift it to your parents. He said, 'Partha da, you should drive to office'," the coach said.

"I completely give credit to his parents. He is an extremely well brought-up boy. His sister is a medical student, his grand father was a headmaster. He has got a very balanced approach to life," he had said back then.

It will be difficult for Shahbaz to make the cut with Axar Patel firmly entrenched in the playing eleven but getting into the mix will certainly boost his confidence.

He has worked his way into the Indian dressing room. The day won't be far when he covers that distance between dressing room and the boundary rope. 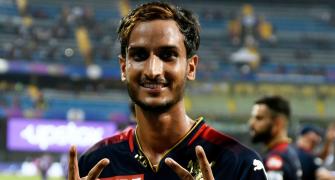 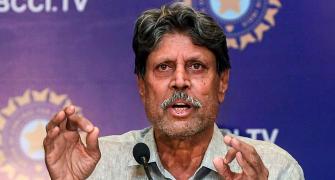 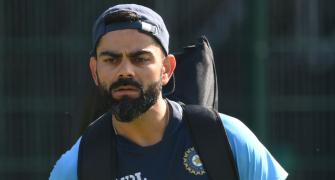 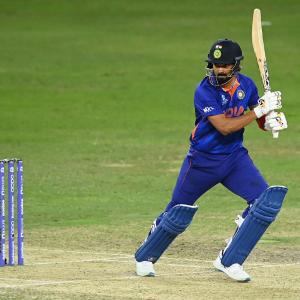