'It is our moral duty to always standby them and make them feel proud of their sacrifices.' Former India cricketer Virender Sehwag offered to bear the educational expenses of children of all the CRPF personnel martyred in the dastardly terrorist attack in Jammu and Kashmir's Pulwama.

On Thursday, at least 40 Central Reserve Police Force personnel were killed in a terror attack while several others are battling for their lives following what is being termed as the deadliest terrorist strike in three decades in the valley.

"Nothing we can do will be enough, but the least I can do is offer to take complete care of the education of the children of our brave CRPF jawans martyred in #Pulwama in my Sehwag International School @SehwagSchool , Jhajjar. Saubhagya hoga," Sehwag wrote on his twitter handle.

Star boxer Vijender Singh, who is employed with Haryana Police, is donating a month's salary.

"I am donating my one month's salary for the martyrs of #PulwamaTerrorAttack and want everyone to come forward and support the families. It is our moral duty to always standby them and make them feel proud of their sacrifices. Jai Hind," the Olympic medallist said.

Condolence messages have been pouring in for the family of the deceased soldiers since the news of the attack broke out.

Condemning the terror attack, former India opener Sehwag had earlier tweeted, "Really pained by the cowardly attack on our CRPF in J&K in which our brave men have been martyred . No words are enough to describe the pain.  I wish a speedy recovery to those injured."

India captain Virat Kohli had earlier postponed the RP-SG Indian Sports Honours, which was to take place on Saturday, as a 'mark of respect' to the CRPF personnel martyred in the Pulwama terror attack.

"The RP-SG Indian Sports Honours has been postponed. At this heavy moment of loss that we all find ourselves in, we would like to cancel this event that was scheduled to take place tomorrow," Kohli posted on Twitter on Friday.

Minerva Punjab FC have also requested the All India Football Federation (AIFF) to shift their upcoming I-League match from Srinagar or defer it in the wake of the Pulwama terrorist attack, saying the club is ready to forfeit if the game is not rescheduled.

Image: Daughter of CRPF ASI Mohan Lal pays her last respect during the wreath-laying ceremony, in Dehradun, on Saturday. 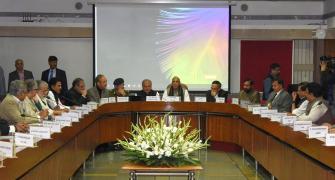 'Entire nation speaks in one voice': All-party resolution on Pulwama 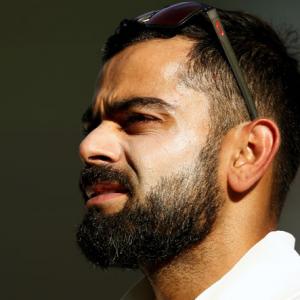