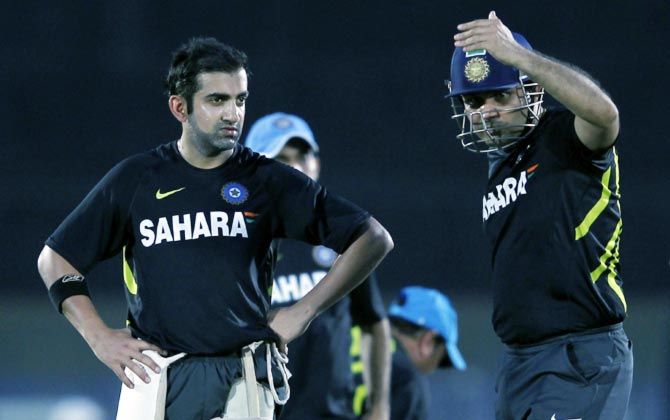 Senior pros Virender Sehwag and Gautam Gambhir failed with the bat as Jammu and Kashmir powered by their skipper Parvez Rasool shocked Delhi by two wickets in the opening match of the North Zone leg of the National One-Day Championship for the Vijay Hazare Trophy, in Bilaspur, on Thursday.

On a slow track, Delhi managed to score a below-par 212 for eight in 50 overs as skipper Gambhir scored a painstaking 36 off 75 balls while Sehwag, who was back as an opener, managed only 11 off 37 balls.

In reply, Jammu and Kashmir won in 49.2 overs as skipper Rasool scored 74 off 90 balls with the help of 12 boundaries. It was pacer Ram Dayal, who hit the winning boundary off left-arm spinner Pawan Negi to finish off the match in style.

Batting first, both Sehwag and Gambhir found it difficult to get going on a slowish track.

Sehwag was caught behind off pacer Samiullah Beigh (3/35) to wicketkeeper Obaid Haroon and Unmukt Chand (1) also fell in the same fashion. Gambhir and top scorer Milind Kumar (61) steadied the innings before the former India opener was bowled by Beigh.

Another veteran Mithun Manhas (8) was adjudged leg before off seamer Adil Rishi's bowling.

With four down for less than 100, Delhi required consolidation which was done by Milind and all-rounder Rajat Bhatia, who hit a fluent 50 from 52 balls. While Milind adopted a cautious approach, hitting four fous and a six in his 90-ball knock, Bhatia played a brisk knock hitting seven fours.

For J & K, it was Rasool, who played a pivotal role with some clean hitting as Hardeep Singh (21), Bandeep Singh (25) and Waseem Raza (27) gave him support.

For Delhi, Parvinder Awana (3/40) was the most successful bowler while Ashish Nehra (2/48 in 10 overs) also did a decent job.

Out-of-favour Indian batsman Yuvraj Singh failed to make it count for Punjab as the Harbhajan Singh-led side lost to Haryana by three wickets in the Vijay Hazare One-Day tournament at the Atal Bihari Vajpayee Stadium, in Nadaun.

After being put into bat, the much fancied Punjab rode on Mandeep Singh's 86 to muster a competitive 252 for eight in 50 overs but Haryana achieved the target in 49.1 overs.

Yuvraj stuck around for his 31-ball 23 but was finally stumped off spinner Jayant Yadav. The southpaw struck 2 fours and a six in his 44-minute stay at the crease.

Apart from a solid effort from Mandeep, it was Taruwar Kohli, who made the fight for Punjab with an unbeaten 47 off 39 balls.

Haryana were given a solid start by openers Avi Barot (53) and Sunny Singh (25) but Sachin Rana it was who stood out with an unbeaten 71.

After turning it with the ball, off-spinner Jayant also contributed with the bat, scoring a valuable 32 at number eight. 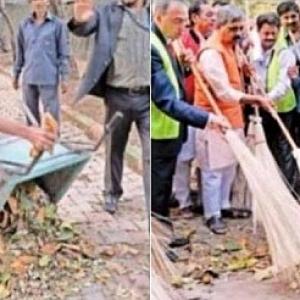 No sachh in this Swachh Bharat drive! Cabinet expansion: 2 Sena leaders likely to be inducted on Sunday