India put up a spirited bowling performance, before Mumbai youngster, Sarfaraz Khan struck an unbeaten half-century to steer the team to a seven-wicket win over Bangladesh and clinch the U-19 tri-series one-day cricket tournament in Kolkata on Sunday. 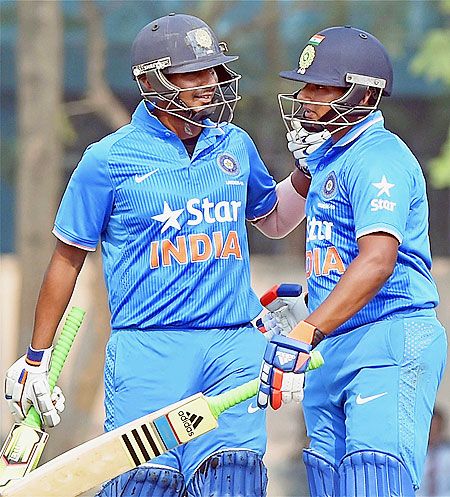 After bundling out Bangladesh for 116 in 36.5 overs, India reached 117 in just 13.3 overs, losing three wickets in the process.

Chasing a modest target, India, from 38 for no loss, found themselves struggling at 42 for three in 6.3 overs.

But Sarfaraz, who plays for Uttar Pradesh in the Ranji Trophy, steadied the boat.

The burly Mumbai right-hander, who had a quiet tournament before today's match, returned to form with a superb knock. He was particularly brutal against Bangladeshi left-arm spinner

Saleh Ahmed Shawon Gazi as he raced to the fastest half-century of the tournament.

Gazi conceded 15 runs and 20 runs from his ninth and 11th overs, respectively with Sarfaraz striking 4, 6 and 4, before following it up with 4-6-4-4 in the next over to reach to his fifty in 23 balls.

Sarfaraz had a close call on 11 when his flashy drive over covers was missed by an outstretched Pinak Ghosh, who failed to get on to the difficult chance.

IMAGE: India U-19 cricketer Sarfaraz Khan celebrates with captain Ricky Bhui after completing his 50 during U-19 Tri Series final against Bangladesh at Salt Lake in Kolkata on Sunday