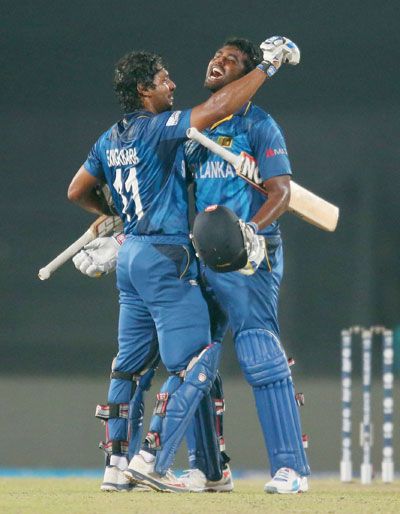 India’s quest for a historic treble ended in heartbreak as Sri Lanka came up with a clinical performance to beat them by six wickets in the final of the World T20 in Mirpur on Sunday.

Batting first, Virat Kohli scored a belligerent 77, but Yuvraj Singh’s excruciatingly slow knock of 11 off 21 balls saw India, champions in 2007, end up with a modest 130 for four in 20 overs.

In reply, Sri Lanka faced a few anxious moments in the early stages of the chase but eventually overhauled the target with 13 balls to spare.

- Photos from the final

It turned out to be a fitting finale for Mahela Jayawardene and Kumar Sangakkara, the two retiring legends of Sri Lankan cricket, as both ended their T20 careers with a memorable triumph.

Jayawardene’s 24 was a sweet little innings that set the tempo, while Sangakkara anchored it to perfection with an unbeaten 52. He again proved a thorn in India’s flesh as he chose the final of the tournament to claw his way back to form after a poor showing in the team’s first five matches.

The match decisively swung Sri Lanka’s way in the 15th over as Thisara Perera (17 not out) freed his arms to hit Amit Mishra over long-on and Sangakkara swept the bowler fine to get a boundary. Fifteen runs came off that over and the match was as good as finished by then.

Sangakkara hit Mishra in his next over for a four over extra-cover while Thisara again hit the portly leggie for a six.

Mishra went for 32 from four overs and would like to forget his last two matches after a good start in the tournament.

While Sangakkara made it a farewell to remember, Yuvraj could face the ire of Indian cricket fans as his slow batting completely upset the team’s momentum.

Egged on by Sanatha Jayasuriya, the hero of the 1996 World Cup triumph, Sangakkara completed his 50 off 33 balls with a sweep.

India, though, started the defence of the modest total in earnest, with Mohit Sharma dismissing Kusal Perera (5) in the second over.

However, in the bowler’s next over, Jayawardene got three boundaries as Lanka were finally up and running in the chase. The first was a cheeky upper cut, the second a tuck off his hips and the third a ‘lemon cut’ as 15 runs came off that Mohit over.

Then came the Jayawardene special as he played a deft late-cut off Bhuvneshwar. It was followed by another cheeky scoop over the bowler’s head as the Indians wore a surrendered look on their faces.

Dilshan (18) was brilliantly caught by Kohli at the deep square leg fence off Ashwin and Sangakkara joined Jayawardene.

The latter’s crisp 24 ended when he tried an uncharacteristic cross-batted heave off Suresh Raina and was caught at the deep mid-wicket boundary by Ashwin.

Lahiru Thirimanne (7) was dismissed when he went for a cut shot and Dhoni snapped it brilliantly behind the stumps off Mishra’s bowling.

Sri Lanka were 78 for four at that stage but Perera and Sangakkara coolly steered the team home.

Earlier, Kohli struck his fourth half century of the tournament with yet another superb effort but the Lankan bowlers applied the brakes on a struggling Yuvraj which certainly hampered the scoring rate to a large extent.

Kohli struck five fours and four sixes in his 58-ball knock even as Yuvraj looked completely out of sorts. The last four overs produced only 19 runs due to Yuvraj's failure to get big hits.

While Kohli peppered all parts of the field with his blazing blade, Yuvraj found it difficult to even pick up Sachithra Senanayeke's 'doosra' and Lasith Malinga’s blockhole deliveries.

His struggle became so apparent that even Kohli’s anger was palpable at the other end as the hero of 2007 triumph consumed delivery after delivery.

Rangana Herath (1-23) and Angelo Mathews (1-25) gave away only 48 runs in the eight overs as it became a Kohli versus Sri Lanka duel. Even Nuwan Kulasekara (1-29) had a decent day in office despite 16 coming off his one over.

When Yuvraj was finally out for 11 off 21 balls – caught in the deep -- the loudest cheer came from Indian fans, who were relieved to see him back in the dug-out.

Skipper Mahendra Singh Dhoni came in with only 11 deliveries left and found it difficult to accelerate the pace of scoring as Malinga and Kulasekara bowled yorkers.

Earlier, Ajinkya Rahane (3) looked completely shaky during his eight-ball stay at the crease. Angelo Mathews pitched it on length and the opener played it early trying to pull it and was played on.

Image: Kumar Sangakkara and Thisara Perera celebrate as Sri Lanka beat India in the final of the ICC World Twenty20 in Mirpur on Sunday night. 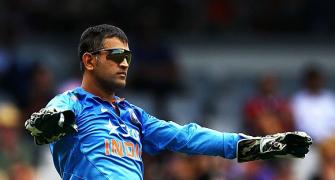 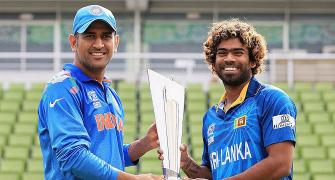 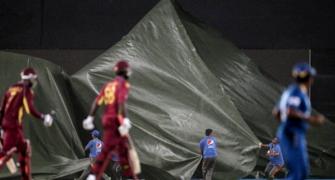 'The Almighty wants Sangakkara, Mahela to win a World Cup' 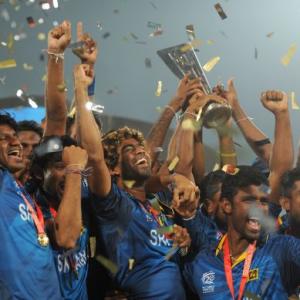