'Unfortunately Delhi came hard at us, they bowled smartly and we weren't up to it.' 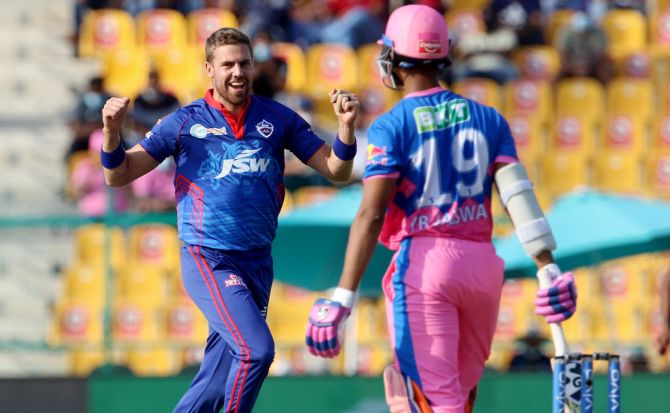 Rajasthan Royals' director of cricket Kumara Sangakkara blamed the 'careless' approach of his batting unit in the first 10 overs for the 33-run loss against Delhi Capitals on Saturday.

Electing to bowl, Royals restricted Delhi to a modest total of 154/6 but they failed miserably in the run chase to finish on 121/6. They were struggling on 48/4 in 10.2 overs at one stage before captain Sanju Samson added some respectability to the total.

"154 was a great total to limit Delhi Capitals to, (what) we needed to do was not be careless in the first 10 overs. Unfortunately Delhi came hard at us, they bowled smartly and we weren't up to it," Sangakkara said after the match.

"So, I wouldn't worry too much about the lower middle-order, they got us out of lot of trouble in the first half of the IPL and I am sure, they will come good, as we go along."

Captain Sanju Samson top-scored with an unbeaten 70 off 53 balls but he didn't get the support from the other end.

"Chasing 154, should have been done with the batting that we had, especially starting from the top-order and downwards, and we weren't good enough on the day," Sangakkara said.

Sangakkara also rued the injuries to Evin Lewis and Chris Morris which forced them to make changes in the playing XI.

"It is unfortunate that we had a couple of injury concerns that meant that (Evin) Lewis and (Chris) Morris didn't play, but that is just temporary and we have the options," said the former Sri Lankan great.

"It is not just about making changes, it is about whoever does play, to kind of stick to the game plan and understand what is happening and access conditions."

Asked if skipper Samson should have upped the ante earlier, Sangakkara said, "Well, it was a tough one for the skipper, he was batting so well. All we needed was someone to stay with him and unfortunately losing wickets so regularly, didn't allow Sanju to cut free early on."

Sangakkara also credited the Delhi bowlers for not allowing him to free his arms.

"The Delhi boys also bowled quite well and smartly, managed to bowl away from the areas that are Sanju's strengths."

South African David Miller too couldn't make the opportunity count as he was stumped by Rishabh Pant off Ravichandra Ashwin in the fifth over.

"You can look at it couple of different ways, he is a naturally attacking player and that's the shot he usually plays, unfortunately he is up against a really smart and willy bowler with a lot of experience, and that is sometimes a trade-off," Sangakkara said.

"But probably right, it is not the ideal situation to take such a risk when we have lost a couple of wickets, but that is T20 cricket and it happens and you just got to get smarter."

Delhi Capitals pacer Anrich Nortje, who returned with figures of 2/18, said variations was the key on a track like Abu Dhabi which was a bit slower than Dubai.

"It is definitely a bit slower than Dubai. We were expecting it as well, obviously playing a day game here, it is not going to be quick, it is either going to be slow or very slow," he said.

"So, I think variations on good length that is a very good option and also (dealing with) the odd length, ... if you just change the grip on the ball, that might be a variation itself, so just try and hit the stumps.

"...it is bit difficult to hit straight, the shorter deliveries are always easier to hit, so just to try and hit the good length and play with the ball in hand, you don't have to bowl a slow ball or anything else."