Ishant in trouble as Sammy seeks apology for racist nickname

'Me being a team man, I thought, hey, team-mates are happy, it must be something funny. You can understand my frustration and my anger when it was pointed out to me that it wasn't funny at all, it was degrading.' 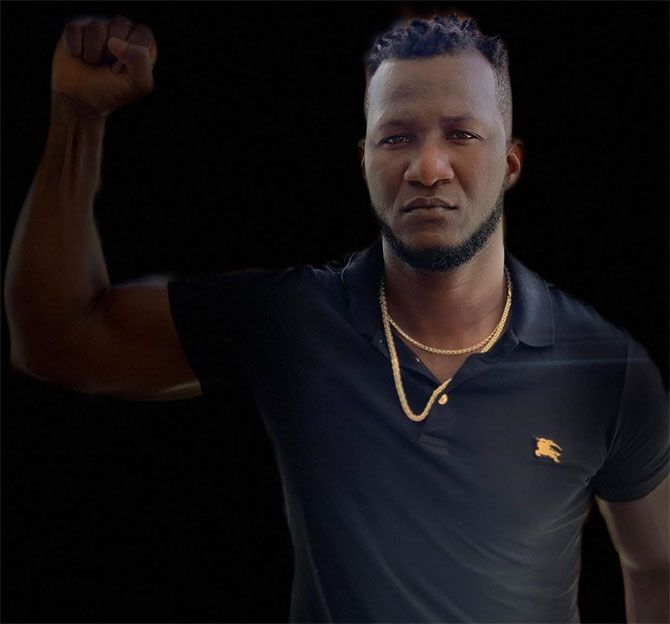 IMAGE: Former West Indies captain Darren Sammy said he feels disappointed with his teammates, who addressed him by the racist nickname during his stint with SunRisers Hyderabad in the IPL in 2013 and 2014. Photograph: Kind courtesy, Darren Sammy/Instagram

An old social media post by India pacer Ishant Sharma lent credence to former West Indies captain Darren Sammy's allegation that a racist nickname was used to address him during his IPL stint with Sunrisers Hyderabad for which he is now demanding an apology.

The two-time T20 World Cup-winning West Indies captain, while commenting on the protests over African-American George Floyd's death in the US, had spoken about being called 'Kalu' while he was in India. 'Kalu' is a racially derisive word, a jibe used to describe black people.

Sammy said having understood the meaning only now, he feels disappointed with his teammates, who addressed him by that nickname during his stint with SunRisers in 2013 and 2014.

One of them is likely to be Ishant, who had shared a group picture also featuring Sammy, on May 14, 2014, using the word 'Kalu' to identify the West Indian in it. The same year, even Sammy addressed himself as 'Kalu' in a social media post to offer birthday wishes to VVS Laxman -- the SRH mentor at that time.

"I was listening to Hasan Minhaj (Indian-American comedian and actor) talking about how some of the people in his culture view or describe black people," Sammy said in his latest Instagram post.

"...I was angry after listening to him describing a word that they use to describe black people, which he was saying is not in a good way and it was degrading.

"Instantly I remembered when I played for Sunrisers Hyderabad in 2013 and 2014, I was being called the exact same word that he described," he added.

Sammy demanded an apology from his SunRisers teammates, asking them to reach out to him.

"All those who used to call me that, you guys know yourselves... Reach out to me, let's have a conversation. Because, if it was in any way, shape or form what Minhaj said it meant, I'm very disappointed," he said.

"I will be messaging those people. You guys know who you are. I must admit, at the time in which I was being called that, I did not know what it meant," he added.

Sammy, who now plies his trade in the Pakistan Super League, said he distinctly remembers laughter at the very mention of the word.

"Me being a team man, I thought, hey, team-mates are happy, it must be something funny. You can understand my frustration and my anger when it was pointed out to me that it wasn't funny at all, it was degrading," he said.

"I have had great memories in all the dressing rooms I have been in, as a T20 player, as a leader in a dressing room, as a captain, I have always been one to build up a relationship or build up a team, not bring it down.

"So, all those who used to call me that, you guys know yourselves, some of you have my numbers, you have me on Instagram, on Twitter, wherever. Reach out to me, let's have a conversation," he added.

Sammy reiterated that he is very disappointed.

"...I'll still be angry, and deserve an apology from you guys, because I saw all of you guys as my brothers. So, talk to me, reach out to me, please clear the air," he said.

Ishant, in another past Instagram post, had described Sammy has one of the best human beings he knows and also a close friend.

The campaign against racism has picked up globally following Floyd's death at the hands of a white police officer. The incident has led to violent protests in the US.