Sachin Tendulkar dominated the LG ICC Awards 2010 shortlist, nominated in as many as three categories.

Dashing India opener Virender Sehwag, Hashim Amla of South Africa and England's Graeme Swann are the other nominations for the Cricketer of the Year award.

The votes have now been cast by the independent 25-person academy and these four men are the ones in the running to receive the Sir Garfield Sobers Trophy for Cricketer of the Year at a glittering ceremony in Bengalore on October 6.

In addition, Tendulkar, Sehwag and Amla are also short-listed for the Test Player of the Year alongside South Africa's Dale Steyn at the seventh annual LG ICC Awards, presented in association with the Federation of International Cricketers' Associations (FICA). 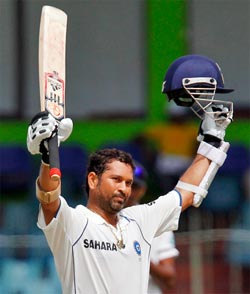 Tendulkar is also in contention for the ODI Player of the Year award as he is short-listed in that category with Australia duo of Shane Watson and Ryan Harris as well as South Africa's AB de Villiers.

This year's ICC Awards includes nine individual prizes, including the new People's Choice Award and also features the selection of the Test and ODI Teams of the Year and the award to the side that has adhered most to the Spirit of Cricket.

The long-lists of nominations were made by a five-man ICC selection panel chaired by former West Indies captain and current chairman of the ICC Cricket Committee Clive Lloyd. The panel also includes former players such as India's Ravi Shastri, Matthew Hayden of Australia, Angus Fraser of England and Zimbabwe's Duncan Fletcher.

The nominations from the Women's Cricketer of the Year were decided after a committee of former players, current administrators and journalists created a long-list. This in turn was broken down into a short-list by a separate 25-person voting academy.

This year's short-list for the Women's Cricketer of the Year sees two of Australia's victorious World Twenty20 team nominated for the top honour. Shelley Nitschke and Ellyse Perry are joined by West Indies Stafanie Taylor and England's Katherine Brunt.

To qualify for that award a player must be under the age of 26 and have played fewer than five Tests and/or 10 ODIs at the start of the voting period.

The Associate and Affiliate Player of the Year award serves to recognise and reward the efforts in all international matches of the outstanding cricketers from the teams outside the ICC Full Members.

This year's short-list sees the return of 2008 winner, Ryan ten Doeschate of the Netherlands, who is joined by Ireland pair of Trent Johnson and Kevin O'Brien while Afghanistan's Mohammed Shahzad completes the list.

Based on the period between August 24, 2009 and August 10, 2010, the ICC Awards 2010 take into account performances by players and officials in a remarkable period for the game.

That period includes such high-profile events as the ICC Men's and Women's World Twenty20 2010 in West Indies, the ICC Champions Trophy 2009 in Australia and the ICC World Cricket League Division 1 2010 in the Netherlands, as well as several bilateral Test and ODI series.

Short-lists of nominees (in alphabetical order)

Cricketer of the Year

Test Player of the Year

ODI Player of the Year

Associate and Affiliate Player of the Year

Twenty20 International Performance of the Year

Brendon McCullum (NZ) for his striking of 116 not out in 56 balls against Australia in Christchurch, New Zealand on 28 February

Women's Cricketer of the Year

Umpire of the Year