Sachin, Yuvraj roll back the years as India Legends win 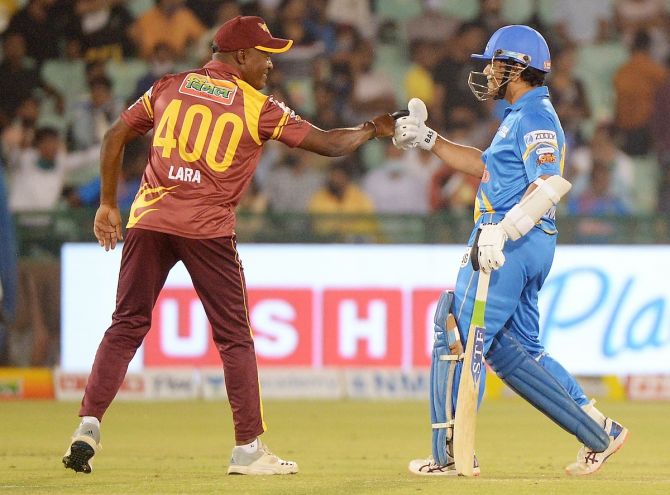 Sachin Tendulkar-led India Legends stormed into the finals of the first edition of the Road Safety World Series T20 after beating West Indies Legends by 13 runs at the Shaheed Veer Narayan Singh International Cricket Stadium, in Raipur, on Wednesday evening.

It was none other than captain and crowd favourite Tendulkar who led the way with a stylish half-century after Virender Sehwag's entertaining cameo and before Yuvraj Singh's six-hitting spree. Chasing 219 to win, the Windies were restricted to 206 for 6 in 20 overs by India.

Needing 24 in 12 balls, Indian seamers R Vinay Kumar and Irfan Pathan bowled their heart out to help their win which was once going the visitors' way.

Vinay Kumar took two wickets of -- captain Brian Lara (46) and Tino Best at a crucial juncture in the 18th over that brought them back into the game.

Earlier, Dwayne Smith (63) and Narsingh Deonarine (59 not out) half-centuries went in vain as Windies were knocked out of the tournament.

Earlier put into bat first by West Indies on a batting beauty, the Indian Legends' dominating show with the bat saw them post another 200 plus target in the second successive game.

Riding on Tendulkar's half-century and Yuvraj's entertaining 20-ball 49 not out which had six sixes and a four saw India score 218 for three in 20 overs. 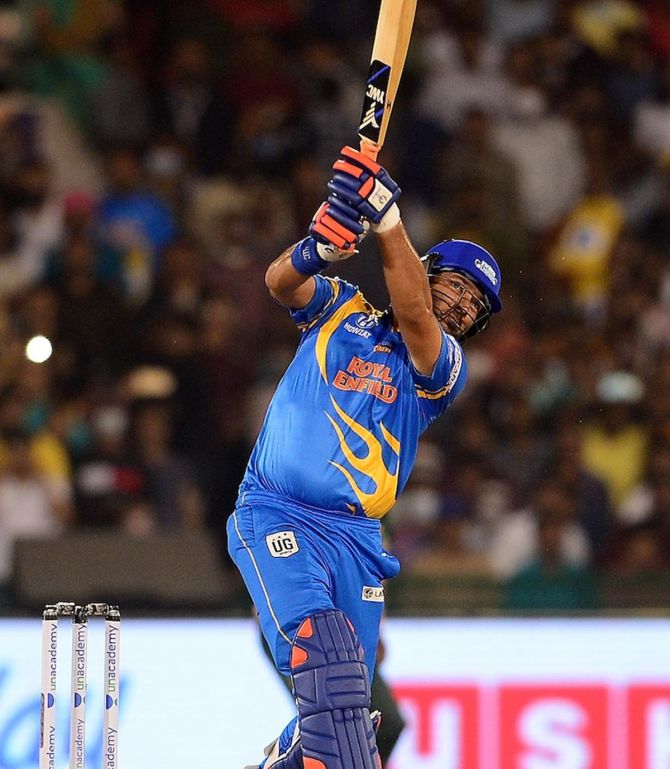 IMAGE: Despite hammering 6 sixes, Yuvraj Singh was stranded at 49 not out. Photograph: Road Safety World Series/Twitter

Other than Tendulkar and Yuraj's crucial knocks, Sehwag (35), Yusuf Pathan (37) and Mohd Kaif (27) contributed with the bat, too.

India were off to a rollicking start with Sehwag taking on the attack from ball one by driving left-arm spinner Suleiman Benn through covers.

It was no stopping for Sehwag who was in an attacking mood while Tendulkar took his time.

Sehwag didn't spare the bowlers when they pitched in his zone. The duo went on to get a half-century partnership for the opening wicket before Sehwag gave a return catch to seamer Tino Best.

Later, Tendulkar continuing from the last game cracked another half-century. He also had a 53-run partnership with Kaif before the latter was dismissed by Ryan Austin.

On course for a century, Tendulkar chipped Best's full delivery which went to Kirk Edwards, who came up with a brilliant effort at deep point.

Yuvraj and Yusuf, later, destroyed the Windies attack in the death overs with some big hits.

The stylish south-paw slammed six sixes in the last two overs. The 19th oversaw Yuvraj hit leggie Mahendra Nagamootoo for four hits over the rope while the next two came in the last over of Suleiman Benn.

Despite those big hits, Yuvraj was stranded at 49 not out. But India were comfortably placed at 218 for 3 in 20 overs.