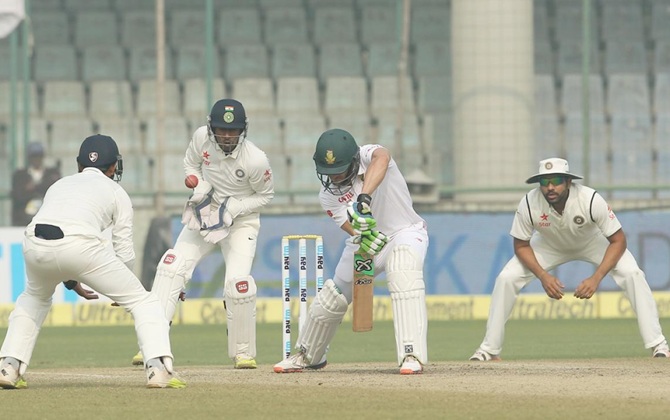 India overcame stubborn resistance to beat South Africa by 337 runs in the fourth and final Test and win the four-Test series 3-0, at the Feroz Shah Kotla, in Delhi, on Monday.

Chasing a target of 481 for victory, the Proteas folded for 143 after tea on the final day despite AB de Villiers grinding out 43 runs off 297 balls. AB de Villiers batted for about six hours, much of it with a swollen thumb, for his 43 to fuel South Africa's faint hopes of salvaging a draw after extraordinary stonewalling from the visitors in their remarkably dour second innings. India struck back in the final session, claiming five wickets as South Africa were shot out for 143 runs in 143.1 overs, to seal victory and vault into the second place in world Test rankings. Resuming on 72-2 on a hazy morning on Day 5, South Africa employed the same ultra-defensive strategy that marked their batting on Sunday.

Determined to eke out a draw, captain Hashim Amla and de Villiers continued frustrating the Indian bowlers with resolute stonewalling. 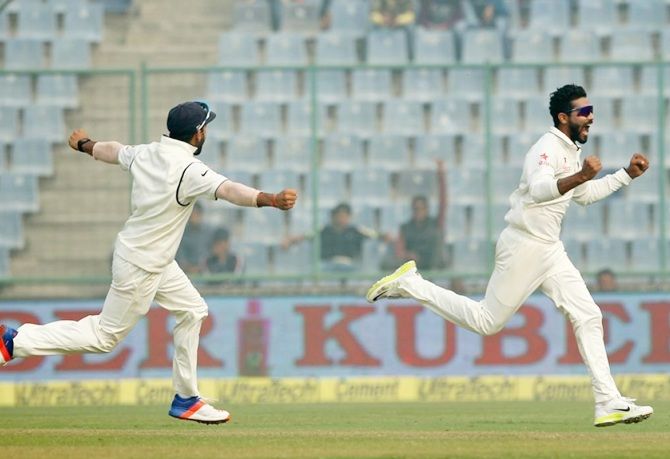 The number of bowlers Virat Kohli employed rose to eight, including the India skipper himself, as he grew desperate to try and separate Amla and de Villiers.

Kohli surrounded the batsmen with up to six close-in fielders for his spinners but success eluded the hosts until the 13th over of the day. Left-arm spinner Ravindra Jadeja earned the breakthrough in the fifth over after the hosts had taken the new ball, spinning one past Amla's tentative bat to hit the top of the off-stump before embarking on a celebratory run.

Amla departed after nearly five hours of dour defending, scoring 25 painstaking runs from 244 balls in what was the slowest ever Test inning of 200 or more balls. The 27 runs he added with de Villiers in 253 balls was also the slowest test partnership of 175 balls or more.

New man in Faf du Plessis displayed the same obduracy with the bat and took 53 balls -- seven more than skipper Amla -- to get off the mark. 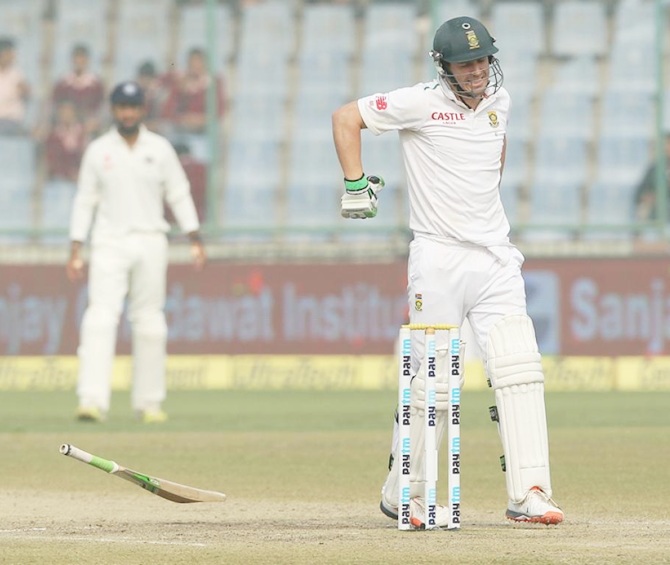 IMAGE: AB de Villiers reacts after being hit on the glove by a delivery from India's Umesh Yadav. Photograph: BCCI

Jadeja, who sent down 17 consecutive maiden overs in the second innings, struck again after the lunch break, trapping du Plessis leg before for 10, ending the batsman's two-hour vigil. Ravichandran Ashwin (5-61) dismissed the scoreless JP Duminy but de Villiers and Dane Vilas (13) joined hands to thwart the Indians to ensure the test spills into its final session. It was one of the slowest innings by de Villiers, who holds the record for the fastest 50, 100 and 150 in one-day cricket, made more remarkable by the fact that he had been hit on the thumb by an Umesh Yadav delivery. 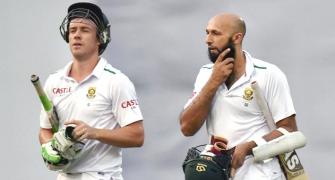 'Hashim has laid down his mark, SA will try and salvage a draw' 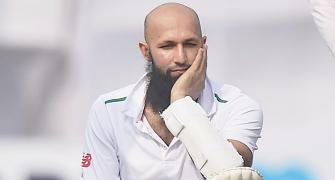 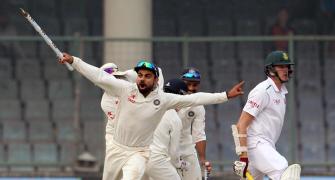 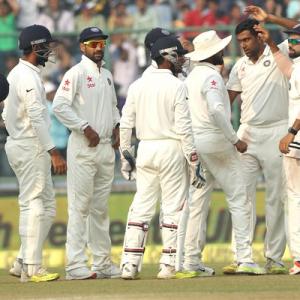 'We didn't think that South African batsmen would play like this' 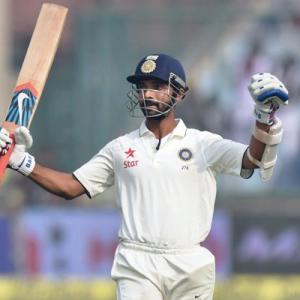