South Africa crushed India by 214 runs in the fifth One-Day International in Mumbai on Sunday, to clinch the five-match series 3-2, their first ODI series win on Indian soil. Rajneesh Gupta presents some interesting numbers from the match. 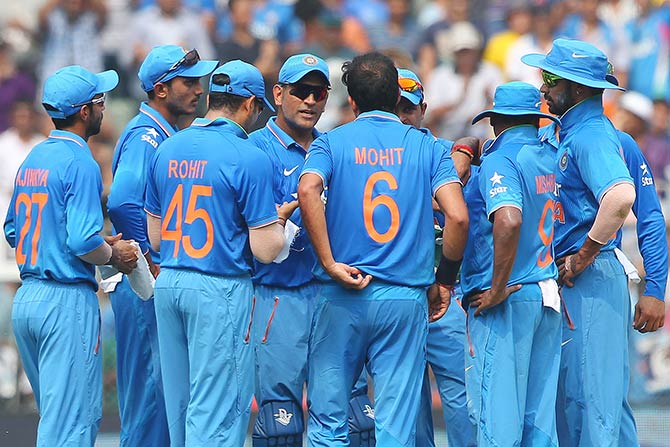 IMAGE: The Indian team during the fifth ODI in Mumbai. Photograph: BCCI

438 South Africa's total - the highest by any team vs India, highest total on the Indian soil and the joint-third highest total in all ODIs.

272 Runs which came in boundaries alone in South Africa innings (excluding one shot that fetched five runs) -- most in a ODI innings. The previous record was of 256 shared by Sri Lanka and Australia.

214 Margin of defeat for India  -- their biggest ever in India and second biggest in all ODIs after the 245-run defeat against Sri Lanka at Sharjah in 2000. This defeat is also the third biggest for a Test playing side at home soil after Pakistan's 234-run loss to Sri Lanka in 2009 and Bangladesh's 233 run-loss to Pakistan in 2000.

133 Score on which Faf du Plessis got retired hurt -- second highest score for an innings ending in this fashion after Sachin Tendulkar's 163 (vs New Zealand at Christchurch in 2009).

106 Runs conceded by Bhuvneshwar Kumar off his bowling -- most by an Indian bowler in an ODI. R Vinay Kumar had conceded 102 runs against Australia (though in 9 overs) at Bangalore in 2013.

100 Number of catches taken by Suresh Raina in the field in ODIs -- fourth Indian to do so after Mohammad Azharuddin, Sachin Tendulkar and Rahul Dravid.

57 Balls taken by AB de Villiers to score his hundred -- fewest taken by a South African batsman against India. De Villiers bettered his own record of 58 balls (at Ahmedabad in 2010). Only Shahid Afridi has scored a faster ODI hundred against India than AB de Villiers -- off 45 balls -- at Kanpur in 2005 (Australia’s James Faulkner also took 57 balls to score his hundred at Bangalore in 2013).

20 Number of sixes in South African innings -- most hit by any team against India. South Africa, in fact, missed the world record, which is 22 by New Zealand against West Indies at Queenstown in 2014.

20 Number of sixes hit by AB de Villiers in the series – most by any batsman in a series against India. Glenn Maxwell had hit 16 in 2013. 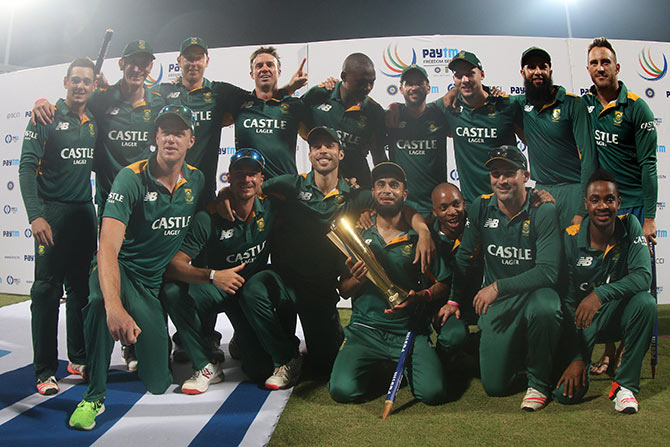 12 Number of hundreds scored by AB de Villiers as captain (in 71 innings) – second most by any player behind Ricky Ponting’s 22 (in 220 innings). De Villiers surpassed Sourav Ganguly’s tally of 11 (in 143 innings).

11 Number of sixes hit by AB de Villiers in the match -- most by any batsman in a one-day international against India. West Indies' Kieron Pollard (Chennai, 2011) and Sri Lanka's Angelo Mathews (Ranchi, 2014) had hit 10 sixes.

8 Number of hundreds Quinton de Kock has scored in his ODI career -- most by any batsman before turning 23, along with Sachin Tendulkar.

8 Number of times AB de Villiers has made a hundred off 75 or fewer balls -- most by any batsman in ODIs. Virender Sehwag has done so six times.

7 Number of ODI hundreds AB de Villiers has scored on Indian soil -- most by any overseas batsman. Chris Gayle has scored six.

6 Number of ODI hundreds scored by AB de Villiers against India -- most by any batsman in India-South Africa ODIs. Sachin Tendulkar has a tally of five.

5 Number of ODI hundreds scored by AB de Villiers against India in India -- most by any overseas batsman. Ricky Ponting, Marlon Samuels, Salman Butt and Chris Gayle share the second slot with three hundreds each.

5 Number of hundreds Quinton de Kock has scored against India -- most by any batsman before getting dismissed for a score between 50 and 99 against a particular opponent.

4 Number of ODI hundreds AB has scored against India as captain -- most by any captain vs India with Ponting (35 innings), AB will do so in just 10 innings.

3 Number of hundreds scored by AB in the series – most by a captain in a bilateral series. In fact, there is only one other instance of a captain scoring three hundreds in any series or tournament. Sourav Ganguly had scored three hundreds while leading India in the 2003 World Cup.

3 Number of batsmen to score hundreds in South Africa's innings -- Quinton de Kock (109), Faf du Plessis (133* retired hurt) and AB de Villiers (119). This was only the second time that three batsmen of same side scored hundreds together. The only other instance was also recorded earlier this year (also for South Africa) when Hashim Amla (153*), Rilee Rossouw (128) and AB de Villiers (149) scored hundreds against West Indies at Johannesburg.

1 The series provided the first instance in India-South Africa rivalry that either team won a bilateral series away from home.