We have capabilities to counter India's spin threat: Duminy 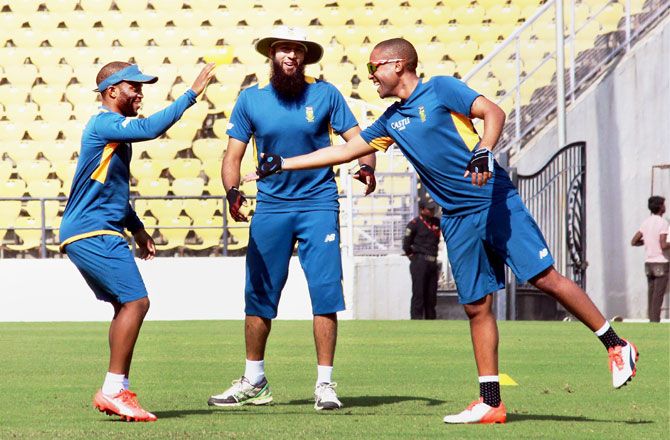 IMAGE: South Africa's Hashim Amla (centre) and his teammates attend a practice session at the Vidarbha Cricket Association (VCA) Stadium ahead of 3rd Test match against India in Nagpur on Sunday. Photograph: PTI

All-rounder JP Duminy has insisted that South Africa are capable enough to tackle the Indian spinners in the 'do or die' third Test match in Nagpur, which starts on Wednesday.

"We know that it's a tough challenge for us but we also know that we have the capabilities to counter those challenges. We have done it before in the past; we have come here and played well in all formats. There are two more Tests and a long way to go in the series, it's important for us to start off well on Wednesday," Duminy told reporters after a lengthy training session.

Duminy, who made a short appearance in his comeback Test in Bengaluru after injury, said that the mood in the camp was positive ahead of crucial tie in the four-match series.

South Africa are trailing 0-1 against India after going down against the hosts in Mohali by 108 runs.

The second match in Bengaluru ended in a draw as persistent rain washed out four days of the game without a ball being bowled.

Ravichandran Ashwin and Ravindra Jadeja have wreaked havoc on South African batsmen as the Indian spin duo have had equal amounts of success with 12 wickets a piece in both Tests.