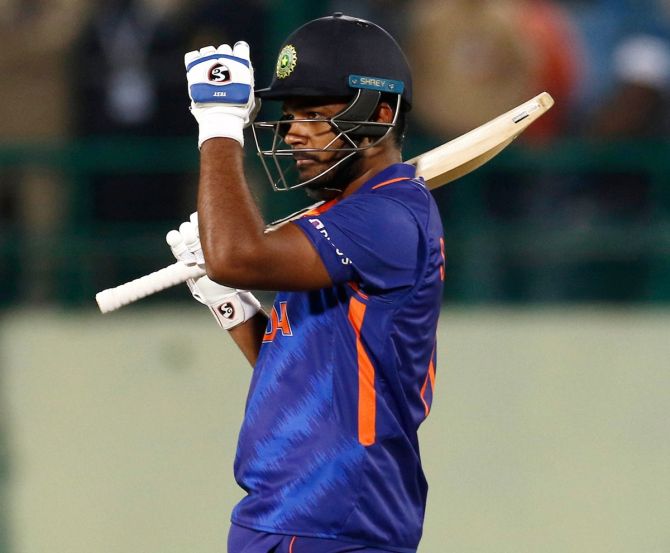 IMAGE: Sanju Samson is currently captaining the India 'A' team that swept the three-match series against New Zealand 'A'. Photograph: BCCI

Wicket-keeper batter Sanju Samson is likely to be named vice-captain of the Indian team for the three-match ODI series against South Africa with many senior players expected to be rested ahead of next month's ICC T20 World Cup.

BCCI sources told ANI that Sanju Samson could be named the vice-captain of the Indian team for the three-match ODI series as most of the senior players are likely to be rested for ICC T20 World Cup. Shikhar Dhawan is likely to lead the team.

Kerala's Sanju Samson, 27, was part of the ODI series against Zimbabwe which India won 3-0. He has represented India in seven ODIs and 16 T20Is so far.

Samson is currently captaining India A that swept the series against New Zealand A on Tuesday.

The source said that batter Rajat Patidar is likely to make his ODI debut against South Africa.

The first T20I will be held in Thiruvananthapuram on September 28. The second T20I will be played on October 2 at Guwahati, followed by the last T20I at Indore on October 4.

The first ODI will be played in Lucknow on October 6. Ranchi and Delhi will host the second and third ODI respectively, on October 9 and 11.