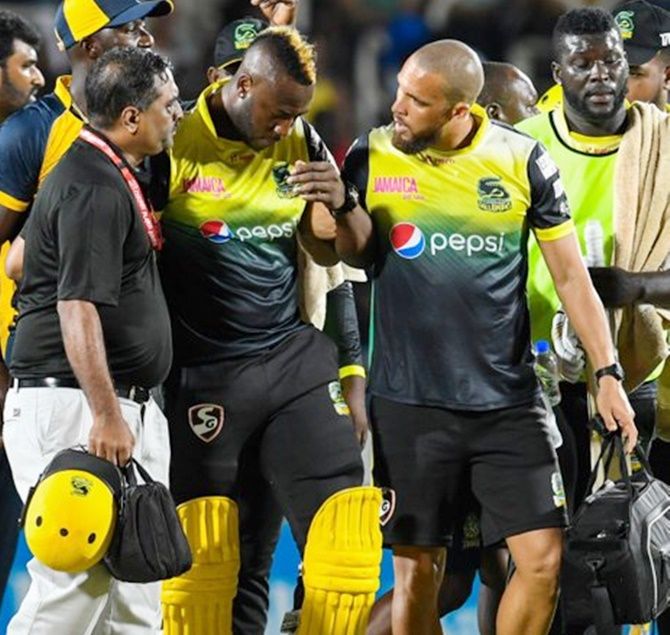 IMAGE: CPL organisers said the 31-year-old had been cleared by scans at hospital. Photograph: CPL T20/Twitter

West Indies all-rounder Andre Russell has been cleared of serious injury after being hit in the helmet and carted off the ground during a Caribbean Premier League match on Thursday, organisers said.

The Jamaica Tallawahs player was struck near the right ear when attempting to pull a short ball by St Lucia Zouks paceman Hardus Viljoen and ended up leaving the field on a stretcher in a neck brace.

CPL organisers said the 31-year-old had been cleared by scans at hospital.

"Under the doctor's advice he has headed back to the team hotel with his wife and a member of the Tallawahs medical team to rest and recover," the league said on Twitter.

Australia's Phillip Hughes died after being struck with a bouncer during a Sheffield Shield match in Sydney in 2014.

In the ongoing Ashes series, fellow Australian Steve Smith was floored by a short Jofra Archer delivery in the second test at Lord's.

Smith returned to bat after a concussion test but was later ruled out of the third match at Headingley.