India captain Virat Kohli struck his 15th Test century while opener Murali Vijay hit form and compiled a ton of his own to help India wrest control on Day 3 of the 4th Test in Mumbai on Saturday.

Here are the statistical highlights from the third day’s play of the fourth cricket Test played between India and England at the Wankhede Stadium in Mumbai. 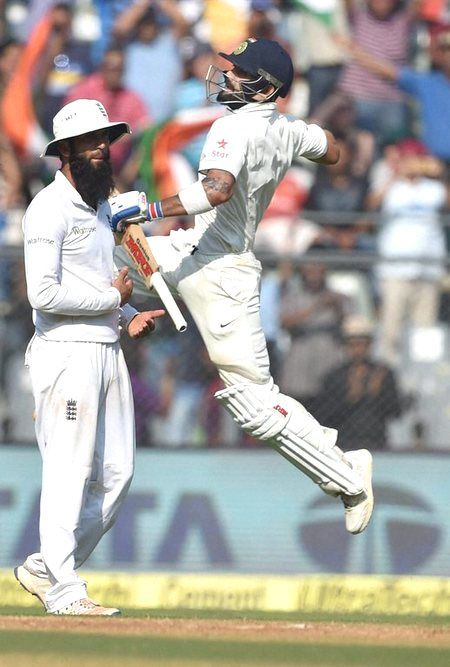 # Kohli averages 50-plus for the first time in Tests and became the first player to achieve the average of 50-plus in all three formats -- Tests, ODIs and T20Is.

# Kohli's tally of eight Test hundreds as an Indian captain is bettered only by Sunil Gavaskar (11) and Mohammad Azharuddin (9).

# Kohli's distinction of reaching 15 hundreds in 89 innings is the second quickest by an Indian batsman next only to the 77 taken by Sunil Gavaskar.

# Murali Vijay's 136 is his eighth century in Tests – his third vs England.

# Before this hundred vs England in Tests, he had scored 146 at Nottingham in July 2014 and 126 at Rajkot last month against them.

# Totally, seven centuries have been registered by the Indian openers in Tests at Wankhede Stadium, Mumbai.  Sunil Gavaskar holds the record with five hundreds at this venue -- two vs Australia & one each vs England, New Zealand and West Indies) and one each by Virender Sehwag (vs West Indies) and Murali Vijay (vs England).

Image: A pumped Virat Kohli celebrates on completing his century against England on Day 3 of the 4th Test in Mumbai on Saturday