The 35-year-old played his 100th T20 International against India last month. He has also played 231 ODIs. 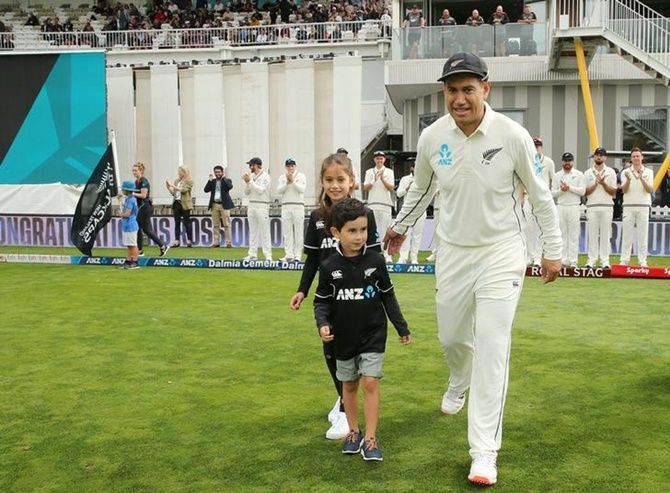 IMAGE: New Zealand's Ross Taylor walks out to Basin Reserve ground in Wellington with his children before the first Test against India on Friday. Photograph: Martin Hunter/Reuters

New Zealand veteran batsman Ross Taylor made history on Friday when he took the field against India in the opening Test in Wellington. He became the first player to play 100 matches in all three formats of the game.

The ongoing match at the Basin Reserve is his 100th Test.

"Really excited about the occasion. It's very nice for the team and the family to experience something they might never do again," he said.

"I'll need some help drinking (the hundred bottles of wine), but they can be stored for a while. It keeps the tradition from (Stephen) Fleming, Brendon (McCullum) and Dan (Daniel Vettori), who all played over a hundred Tests each and, hopefully, we can celebrate this one with a win."

The 35-year-old played his 100th T20 International against India last month. He has also played 231 ODIs for New Zealand.

The right-handed batsman is already New Zealand’s leading run-scorer in Tests and ODIs with 7174 and 8570 runs respectively to his name.

In T20 Internationals, he has scored 1909 runs. Former captain Brendon McCullum (2140 from 71 matches) and opener Martin Guptill (2536 from 88 matches) are the only two Kiwi players above him on the list.

Taylor made his Test debut in 2007 and played his first ODI match a year earlier.