'Joe Root has the potential to play 200 Tests and score more runs than even Sachin Tendulkar.' 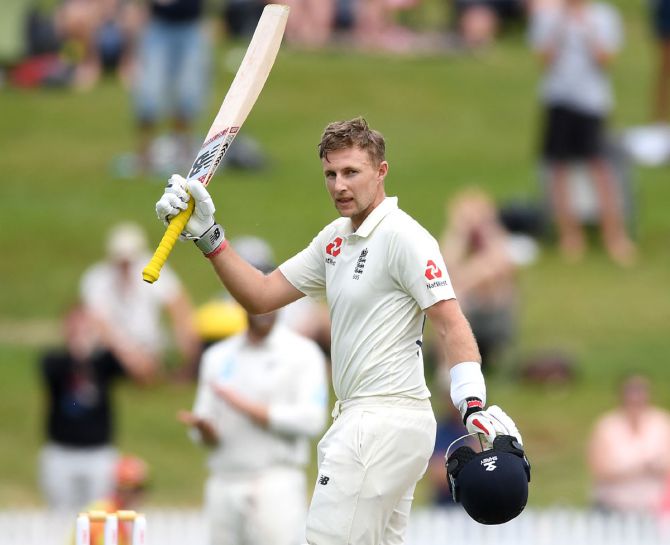 IMAGE: Joe Root scored 426 runs in four innings at an average of 106.50 including two centuries with a high score of 228 in the two-Test series in Sri Lanka. Photograph: Gareth Copley/Getty Images

Root, 30, amassed 426 runs in four innings at an average of 106.50 including two centuries with a high score of 228 in the recently-concluded 2-0 series sweep over Sri Lanka.

Root, whose next assignment is the four-Test series India starting on February 5, also became the fourth-highest run-getter in Test cricket for England and the first ever captain to hit two double-hundreds.

"Forget just scoring more Test runs for England than David Gower, Kevin Pietersen and myself. Joe Root has the potential to play 200 Tests and score more runs than even Sachin Tendulkar," Boycott wrote in a column for The Telegraph.

"Root is only 30. He has played 99 Tests and scored 8249 runs already. As long as he does not suffer serious injury there is no reason why he cannot beat Tendulkar's all-time record of 15,921."

Boycott, however, doesn't want people to compare Root with stars of bygone eras, saying he should be judged only with his contemporaries.

"His contemporaries, such as Virat Kohli, Steve Smith and Kane Williamson, are wonderful players as well who could also score that many runs. We should enjoy Root and only judge him alongside those guys, not great names of the past because every player is a product of their environment," he said.

The 80-year-old England batting great observed that Root has worked on his batting during the COVID-enforced break but said the right-hander will face his biggest test on Australia soil.

"Until this tour Joe had not been making the big scores that influence matches. Perhaps the COVID-19 lockdowns allowed him time to take stock of his batting. For too long he appeared to be influenced by Twenty20 cricket. He was trying to force his way back into England's T20 side, but that frenetic type of batting is not for him," Boycott said.

"I felt that when playing Test cricket his subconscious was telling him to try to score off almost every ball. He was opening the face of the bat to good length balls trying to run it to third man, working straight balls to leg and even when he defended a really good ball he would set off for a run. In other words, he was trying to avoid a dot ball. Against top-class Test bowlers that is not possible.

"Joe's biggest test will be against pace in Australia but, right now, by not batting in a gung-ho style, he has settled down and is giving himself a chance to bat big."