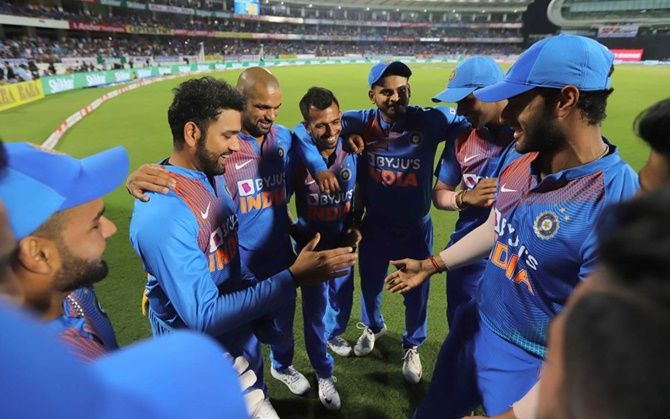 IMAGE: Skipper Rohit Sharma is congratulated by teammates on featuring in 100 T20 Internationals before the start of the second match of the series against Bangladesh in Rajkot on Thursday. Photograph: BCCI

India’s stand-in skipper reached the milestone when he led the team in the second match against Bangladesh, at the Saurashtra Cricket Association Stadium, in Rajkot, on Thursday.

Shoaib Malik (111 games) of Pakistan is the only player to have played more than 100 T20 Internationals.

Rohit is currently the top-scorer in the format with 2452 runs, with regular skipper Virat Kohli second in the list, with an aggregate of 2450 runs. Rohit has scored the runs at a strike-rate of 136.67, which includes four hundreds and 17 fifties.

"It's been a long journey since 2007; I made my debut in the T20 World Cup. There has been a lot ups and down in the last 12 years in this format particularly. This has taught me so many lessons going forward," Rohit had said in Delhi, when asked about the milestone.

"When you come into the team as a youngster, you are trying to learn things which happened quite smoothly at start. Then with few ups and few downs, I have become a stronger player and understood my game really well."

The Mumbai batsman made his T20 debut against England in Durban in 2007.

Harmanpreet Kaur, India’s captain of the women's T20 team, is the other Indian player who has played 100 matches in the shortest format.