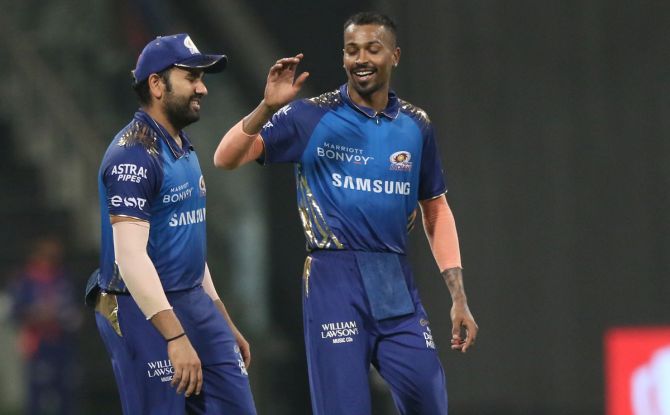 Mumbai Indians pacer Trent Boult is not sure if skipper Rohit Sharma and all-rounder Hardik Pandya would feature in their next IPL game against Kolkata Knight Riders on Thursday but said both of them are recovering well.

West Indies' Kieron Pollard had led the side against Chennai Super Kings in the absence of Rohit, who has a dodgy knee while Pandya also missed the game due to a niggle.

"They are both recovering very well. In terms of their selection for the next game, I am not too sure what's going on there. But day by day, they are improving," Boult said on Wednesday on the eve of their match against KKR.

"They are obviously two vital players in the eleven for Mumbai and we are desperate to get them back. So, fingers crossed that they will be pretty good to go over the next couple of games," added the New Zealand pacer.

Boult said Rohit was 'sorely missed' in the game against Chennai Super Kings but defended the team management's decision to rest the star opener. Mumbai Indians are currently fourth in the points table with eight points from as many games.

"He is right up there in terms of experience and runs achieved in this format. So, it was a big hole but it was a good decision to make sure he is 100 per cent with the amount of cricket coming up.

"If he comes to the eleven, it will be brilliant, but we want to make sure he is 100 percent fit," said Boult.

The defending champions have a better record against KKR in the cash-rich league but Boult believes that history does not matter in this format.

"It is more about starting afresh, every game is such a big game, every match is important now. History is history, it is nice to have previous results against them, but they are a quality side and we would not take them lightly," said the left-arm pacer.

Boult, 32, also felt that competing in the IPL was good preparation ahead of the T20 World Cup, which will be held in the UAE and Oman in October-November.

"You could probably not have any better build-up to the tournament like the T20 World Cup. The focus is on what's on for the next couple of weeks, but in terms of preparation, it is very good.

"Conditions can change quite quickly but having to deal with the heat and humidity is a big challenge at this stage. It is going to be interesting to see how conditions move over the course of the next few weeks," said the Kiwi pacer.