Sachin Tendulkar is a remarkable young man whose batting has been treated with due reverence but whose extraordinary strength of character has been neglected.

It is no small thing for a well-raised boy of 16 years to burst upon a scene of utmost riches and glamour and yet remain almost the same, as if working in a bank or behind a desk at a large corporation in respectable positions in which a grown man might pass his years and through which he might feed his family. 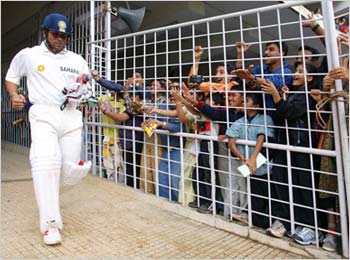 It is no small thing to be taken from adolescence and hurled into a world of fame and, as it emerged, cynicism, and still be that same smiling and open young man, a neighbour, a tax-payer, a watcher of soap operas, a father and a husband and yet a legend also.

Tendulkar walks out to bat Tendulkar has been obliged by the early detection of his prodigious gift to lead his life in public. His marriage, deaths in the family, his every tickle and fancy have been documented by those seeking an understanding of greatness, and by observers endlessly fascinated by the tittle tattle of famous lives.

Nothing can prepare a man for the onslaught of curiosity or celebrity, the surge of wealth, the recognition wherever a man goes, the bowing and scraping, and secret-mounting criticisms as flaws are detected in the gem. Throughout these rigours, Tendulkar has led as normal a life as was available -- quiet, restrained, neither angry nor yet opportunistic.

He has not relished the spotlight nor tried to avoid it like some blushing debutant, but has simply accepted it is there and adjusted his life accordingly. He is not a Don Quixote charging at windmills, but, rather a practical and humble man trying to lead his life properly. He has not indulged himself in tantrums nor reacted to detraction with some teenage explosion. Nor has he been associated with the darker forces encircling the game or protested at his occasional disappointments, not least the loss of the Indian captaincy.

Instead, he has taken life in his stride, repeatedly bouncing back from adversity, regularly meeting the challenge brought about by his talent and general circumstance. To survive has been an achievement in itself; to have prospered counts amongst Tendulkar's mightiest feats.

It is easily forgotten that Don Bradman was often ill during his cricket career yet lived into his nineties, the very picture of health and longevity. He was supposed to be a batting machine, remorseless, relentless and utterly without emotion, and yet the game wore him down and almost cost him his life in the 1930s. No man's life is so simple; no man is immune from the pressures. And yet, in the Don's time, players enjoyed long breaks between tours and could miss a trip without losing their places or popularity. Moreover, Australia was a smaller country and the newspapers were much less intrusive. Nor had the tentacles of television spread.

Bradman could hope for peaceful periods and still the game took its toll. Tendulkar faces the same expectations whenever he walks to the crease or since he started shaving; a time when most of us were up to all sorts of mischief in our minds.

Cricket supporters might care to remember themselves as 16-year-olds and then at 18 years of age, strolling out to meet the Australian fast bowlers in Perth, and then pause to reflect upon the deeds of this warrior. Neither fame nor fortune has turned Tendulkar's head, and the strain has not undone him.

He resembles Michael Jordan and precious few other great sportsmen in the way he has remained a human being, keeping his game as merely part of his life so that it does not arrest his development or reduce his responsibilities as an adult.

Rather than concentrating upon Tendulkar's manifest though minor failings as a batsman, cricket should be thanking its lucky stars that such a player appeared at this hour. Far from dwelling upon his weak points, India should be celebrating his achievements on the field and doing all in its power to assist him off the field. Watching Tendulkar bat has been one of the great sporting privileges of the last 15 years. It has also been a pleasure because he plays a beautiful and attacking game, founded upon a superb technique that remains in constant need of attention, for bad habits can easily creep in.

Tendulkar is always trying to push the score along, too, reflecting the adventure of youth and the excitement of the game that chose him. Like Brian Lara and Shane Warne, and even Wasim Akram at his peak and on his best behavior, he has explored both the game itself and the outer limits of his ability. At once he has been correct and entertaining, and like all champions has lasted a long time, a hundred Test matches already and still a young man. Doubtless the game and the demands have taken a toll, but he remains a wonderful batsman, a prized wicket and the batsman of his generation.

Although he does not parade and is content to be part of the team, he is a true champion. His greatness lies in the excellence of his play, the extent of his achievements and the manner in which he has carried himself past the torments and the tiredness and the backslapping and the bulging bank account and into life itself. He is a brilliant sportsman and a straightforward fellow, and has shown that the combination is possible, despite everything.