No action was taken against former India Under-19 captain Anuj Rawat for playing in an unsanctioned T20 league in Mauritius, and Irfan Pathan, who enlisted in the Caribbean Premier League draft without the BCCI's permission. 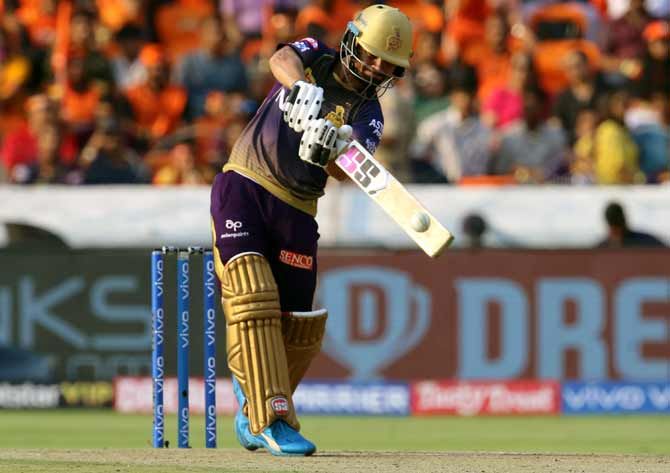 IMAGE: Rinku Singh was part of Kolkata Knight Riders in the last two Indian Premier League seasons and it was learnt that he played in the unsanctioned league after the recent edition got over. Photograph: BCCI

The Board of Control for Cricket in India handed a three-month suspension to Uttar Pradesh left-hander Rinku Singh for playing in an unsanctioned T20 league in Abu Dhabi, which has now led to his withdrawal from the India ‘A’ team.

While Rinku's suspension starts June 1, the BCCI let off veteran all-rounder Irfan Pathan with a warning for enlisting in the Caribbean Premier League (CPL) draft without the parent body's permission before withdrawal.

Similarly, no action was taken against former India Under-19 captain Anuj Rawat for playing in an unsanctioned T20 league in Mauritius alongside Pakistani cricketers of dubious credibility.

Rinku was part of Kolkata Knight Riders in the past two Indian Premier League seasons and it was learnt that he played in the unsanctioned league after the recent edition got over.

"It has been brought to the notice of the Board of Control for Cricket in India that First-class cricketer from Uttar Pradesh and India A player Rinku Singh participated in an unauthorized T20 tournament in Abu Dhabi," read a statement from the BCCI.

"Singh did not seek permission from the BCCI before taking part in the T20 league hence directly violating the BCCI rules and regulations. As per the BCCI norms, a player registered with the Board cannot play in any tournaments abroad without the Board's permission. Rinku Singh therefore has been suspended with immediate effect for a period of three months starting June 1, 2019," it added.

However there are questions being raised as to why Rinku, a young player wasn't at least given a warning about the consequences he could face for his indiscretion.

"If Irfan Pathan, who played significant amount of international cricket, was not even given a rap on the knuckles for registering in CPL after being well aware about the rules and regulations, suspending Rinku after his first mistake is simple double standards," a senior BCCI official, privy with working of Cricket Operations team, said.

When BCCI's General Manager, Cricket Operations, Saba Karim was asked, he said: "We want to send a strong message to the youngsters that there would be consequences if they don't follow the rules and regulations. I agree that Irfan is a senior player but he ultimately didn't play the tournament."

The senior official also questioned that if the logic of setting an example was an issue, then how come did the BCCI allow Delhi keeper-batsman Anuj Rawat to go scot-free after he was seen playing alongside former Pakistan internationals, who till recently were on the ICC anti-corruption unit's radar.

"If you want to teach any youngster a lesson, then it should be same for all. The Cricket Operations team let go Anuj Rawat, who immediately after that played for India U-19 in Sri Lanka. Here for the same offence, Rinku Singh was denied a chance to represent India," he said.