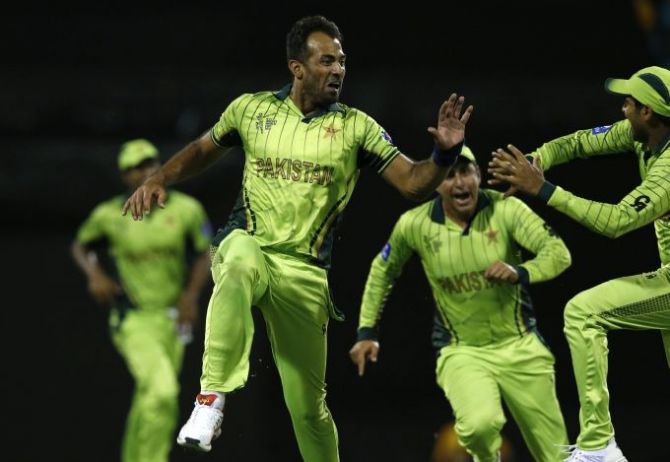 Pakistan's Wahab Riaz (second from left) celebrates with team mates after dismissing Zimbabwe's Tawanda Mupariwa for a duck during their World Cup match at the Gabba in Brisbane. Photograph: Jason Reed/Reuters

Mohammad Irfan extracted steep bounce from the Gabba pitch to pick up four wickets as Pakistan secured their first victory at the World Cup by beating Zimbabwe by 20 runs in their Pool B match on Sunday.

Wahab Riaz also excelled with both bat and ball, scoring a crucial half-century and taking four wickets, as Zimbabwe were all out for 215 in the 50th over, chasing Pakistan's 235-7.

It was Pakistan captain Misbah-ul-Haq's patient 73 and a quickfire unbeaten 54 from Riaz that gave the team, looking for their first win after defeats to India and West Indies, a total to defend after losing early wickets to paceman Tendai Chatara. Pakistan's Mohammad Irfan (R) celebrates with teammates after he dismissed Zimbabwe's Solomon Mire for eight runs during their Cricket World Cup match at the Gabba in Brisbane. Photograph: Jason Reed/Reuters

The left-armer returned in his later spells to also dismiss Hamilton Masakadza (29) and Solomon Mire (eight) to bag his best figures of 4-30 in ODI cricket.

Brendan Taylor (50) gave the Africans a good platform for the chase with a 52-run stand for the third wicket with Masakadza and then a 54-run partnership with Sean Williams (33) but his dismissal off Riaz brought Pakistan back in the game.

Riaz (4-45) then picked up Craig Ervine (14) and Tawanda Mupariwa (zero) in the space of three deliveries in his eighth over to put the chase beyond Zimbabwe's reach. 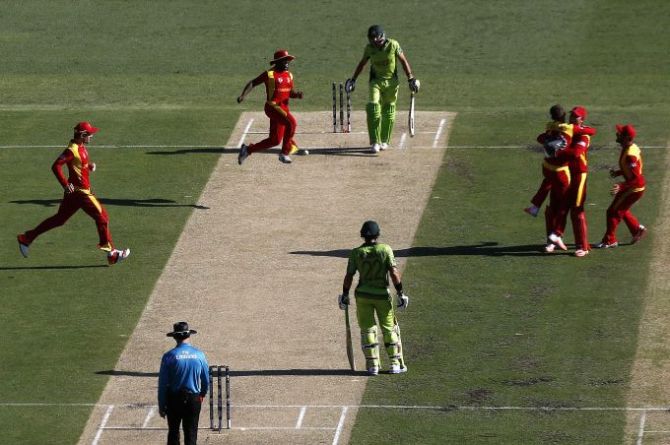 Zimbabwe's Sean Williams (right) celebrates with team mates after he bowled Shahid Afridi (Top) for a duck during their Cricket World Cup match at the Gabba in Brisbane. Photograph: Jason Reed/Reuters

Earlier, Chatara (3-35) got ample movement and bounce off the surface to send back openers Nasir Jamshed (1) and Ahmed Shehzad (0) in his first two overs after Misbah had won the toss and opted to bat.

The double blow forced Pakistan to retreat into a defensive shell, amassing the lowest tally in the first 10 overs at this World Cup when they reached 14-2 after the opening 60 balls.

Pakistan were never able to break free at any time in their innings and as is often the case, Misbah was left with the responsibility of rebuilding Pakistan's innings.

The 40-year-old right-hander added a pedestrian 54 for the third wicket with Haris Sohail (27) and 69 for the fourth with Umar Akmal (33) before Williams struck another double-blow to peg Pakistan back.

The left-arm spinner got deliveries to straighten and clean bowled Akmal and birthday boy Shahid Afridi for a duck in the space of three balls. Misbah ul Haq of Pakistan bats during the World Cup match between Pakistan and Zimbabwe at The Gabba. Photograph: Chris Hyde/Getty Images

Misbah holed out at long on trying to clear Chatara out of the ground after another meaningful stand of 47 with Wahab Riaz (54 not out) for the seventh wicket.

The partnership took Pakistan past the 200 mark and some clean hitting from Riaz, who belted six fours and a six in his 46-ball knock for his first 50 in the format, added some vital runs at the death.

© Copyright 2023 Reuters Limited. All rights reserved. Republication or redistribution of Reuters content, including by framing or similar means, is expressly prohibited without the prior written consent of Reuters. Reuters shall not be liable for any errors or delays in the content, or for any actions taken in reliance thereon.
Related News: Wahab Riaz, Pakistan, Tendai Chatara, Zimbabwe, Misbah
COMMENT
Print this article