'Dropping Ganguly was not easy'

'It is not that we took the decision out of some vengeance.'
'It was not that we dropped someone because we had some enmity with him.' 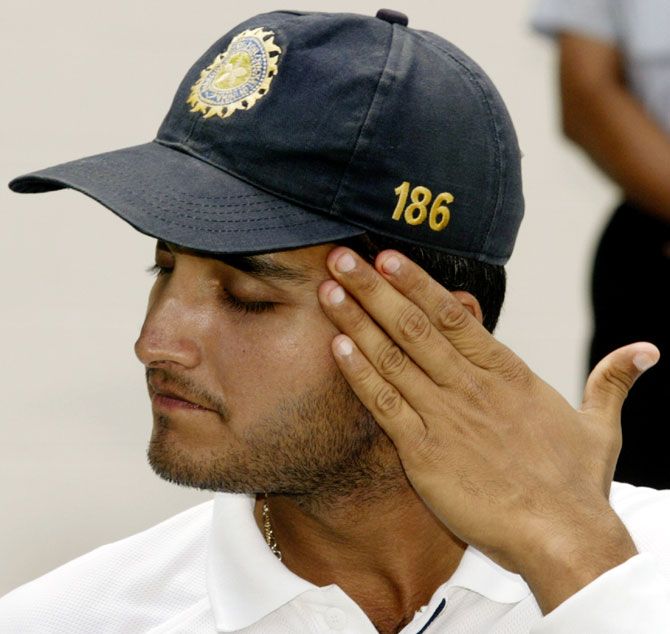 IMAGE: Sourav Ganguly -- who led India from the front and transformed the team into a world-beater -- was dropped from the side in 2005. Photograph: Nigel Marple/Reuters

In 2005, then chief selector Kiran More and then coach Greg Chappell were targeted by angry cricket fans -- especially in Bengal -- after the selection committee dropped then captain Sourav Ganguly from the Indian team.

Such was the impact of the decision that it was even discussed in Parliament.

Ganguly -- one of India's most successful captains -- was replaced as skipper by Rahul Dravid in both Tests and ODIs.

"It is not that suddenly overnight we took the decision," More recalls in the second part of an interview with Rediff.com's Harish Kotian.

Ganguly returned to the team in 2006, but Dravid made his mark as captain and guided the side to Test series victories in the West Indies (2006) and England (2007). Dravid also led India in 15 matches during a world record 17 successful run chases in ODIs. 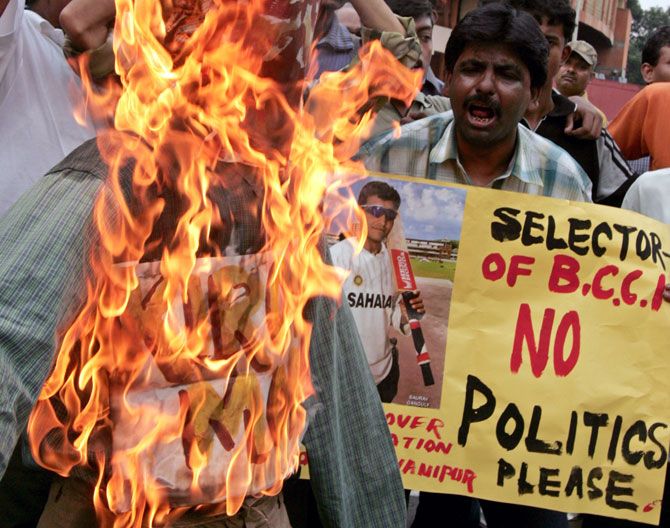 It created a huge uproar when your selection committee dropped Sourav Ganguly and replaced him with Rahul Dravid as the captain.
People blamed you for that Ganguly decision. Was there a lot of pressure during those tough times?

A lot of people say I picked (Mahendra Singh) Dhoni, but it was my team, we five people we all picked Dhoni.

When you drop a player, they can always make a comeback.

So getting dropped is part of a cricketer's life.

When you drop a player like Ganguly, it is not an easy decision. It was a difficult decision, but all five selectors together take the call.

It also depends on the team management, as to what the captain and coach want. You also discuss with the senior cricketers.

It is not that suddenly overnight we took the decision.

It is not that we took the decision out of some vengeance.

It is just a question of having a clear mind and knowing what to do and looking at the process for the future.

We selectors felt that Rahul Dravid was a good choice as the captain and we picked him as the India captain.

We didn't have any grudge against anyone, there was no hard feeling.

It was not that we dropped someone because we had some enmity with him.

I used to feel very bad when I dropped some player because I used to think from their point of view as to how they would think about it.

Would you say Dravid doesn't get credit for his achievements as captain?

He doesn't do marketing (smiles), but he was one of the best captains of India.

I rate him very high. If you look at his record, the stats are outstanding.

He was that rare captain who gave up the captaincy on his own.

He was not dropped as captain, he just said on his own that he doesn't want to be the captain anymore.

He was a man of integrity, he was very honest.

I have high regard for Dravid because no one gives up the captaincy.

In the same way, I have high regard for Dhoni because he also quit as captain on his own.

Dhoni knew what he wanted to do, what the team wants, and other things. It is an individual call for everyone. IMAGE: Kiran More with then captain Rahul Dravid and then coach Greg Chappell at a selection meeting in Mumbai, December 24, 2005. Photograph: Punit Paranjpe/Reuters

How much of an impact did the Dravid-Greg Chappell era have on Indian cricket? Would you say it benefitted Indian cricket or did make it worse?

When you look at the 2011 World Cup winning team, you look at the youngsters who played in that team like (Suresh) Raina, Dhoni, Virat Kohli, (Gautam) Gambhir, Yusuf Pathan, (Shantakumar) Sreesanth, Munaf Patel -- all these guys were the ones whom Dravid and Chappell backed.

We backed them and with experience they did very well along with seniors Sachin (Tendulkar), (Virender) Sehwag, Dravid and Zaheer Khan, among others.

It is not easy to win a World Cup, you can't just say we will win the World Cup next year. So that is why I say all the hard work put in by coaches like John Wright and Greg Chappell helped India in the long run.

So it was not like if you were close to Greg Chappell, you would find a place in the Indian team?

It was not a question of that. We believed that if you are good enough to play for India and if you do well, then you will be picked in the team.

There is no godfather when it comes to selection for the Indian team.

Any player -- be it a top player if he doesn't get runs in 10 innings -- then he will be dropped, so there is pressure on everyone.

That is why I give credit to players like Tendulkar, Dravid and (Anil) Kumble.

People don't talk about Kumble and Dravid's captaincy, but I would say that they are among the best captains of India.

Kumble also did a good pretty job as the captain.

Gary Kirsten came in and won the World Cup in 2011.

It is not a miracle that you come in and within two years you win the World Cup.

It is a process. You had the young guys like Raina, Gambhir, Kohli, Munaf and even Yusuf... (they) played a lot of matches and that helped win the World Cup.

I think the process started from John Wright to Greg Chappell and then it came to Gary Kirsten.