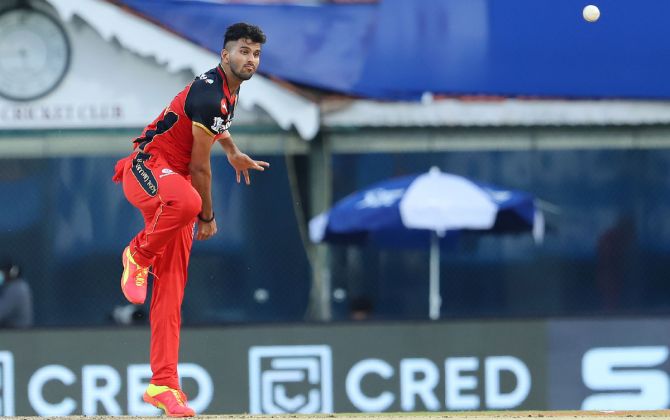 IMAGE: RCB all-rounder Washington Sundar was ruled out of the IPL's second leg in UAE because of injury. Photograph: BCCI

Royal Challengers Bangalore's all-rounder Washington Sundar was on Monday ruled out of the second phase of the IPL starting in the UAE on September 19 because of injury.

Washington suffered a finger injury in England, which has not healed completely due to which he could not clear the fitness test at the National Cricket Academy.

Washington had travelled to England with the Indian Test squad. He was forced to return after fracturing on his finger during a first-class practice match in July. He was hit on the finger when he was playing for County Select XI against India in the warm-up game.

The 21-year-old had turned up for the County Select XI, who were short of a few players, and was hit by India pacer Mohammed Siraj, forcing the all-rounder out of the tour.

"Royal Challengers Bangalore's all-rounder Washington Sundar has been ruled out of the remainder of the Vivo IPL 2021 due to an impending finger injury," RCB said in a statement.

Bengal cricketer Akash Deep, who is net bowler with the franchise, has been named as replacement for the remainder of the IPL.