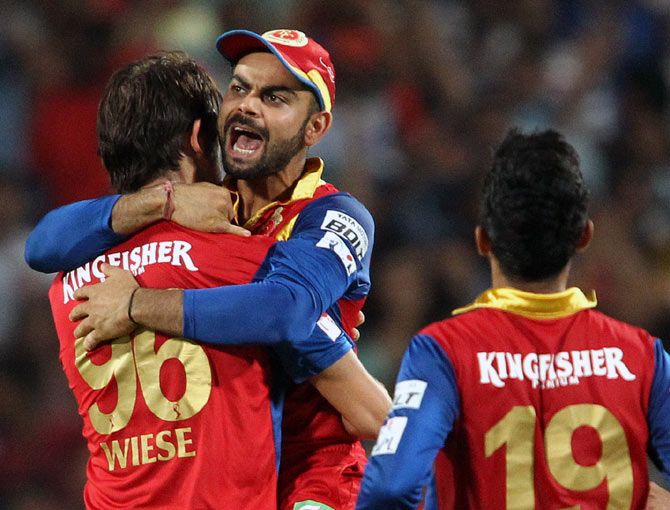 RCB will face Chennai Super Kings in the Qualifier 2 match in Ranchi on Friday, with the winners playing against Mumbai Indians in the final on Sunday.

De Villiers hit a fighting 66 and shared a match-winning 113-run stand with Mandeep Singh, who hit 54 not out, as Bangalore recovered from a sluggish start to post a challenging 180 for four after electing to bat. 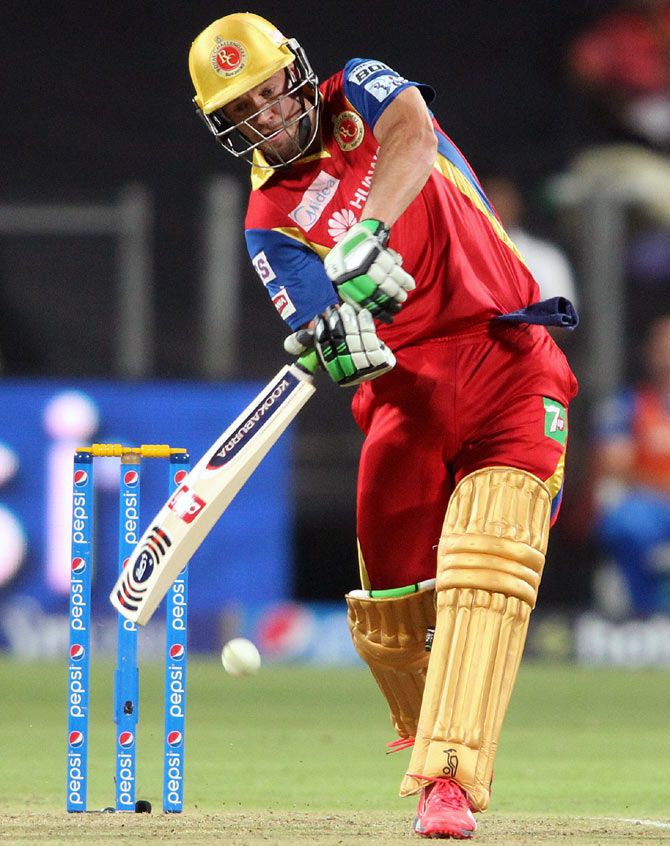 Rajasthan looked in control of proceedings for most part of the RCB innings, but they leaked 86 runs in the last six overs to let the initiative slip.

The South African's 66 came off 38 balls with four sixes and as many fours, while Mandeep took 34 balls for his unbeaten 54, laced with seven fours and two sixes.

Rajasthan never got going in their run chase as they kept losing wickets at regular intervals and eventually folded for a paltry 109 in 19 overs, with Ajinkya Rahane top-scoring with a fighting 42. 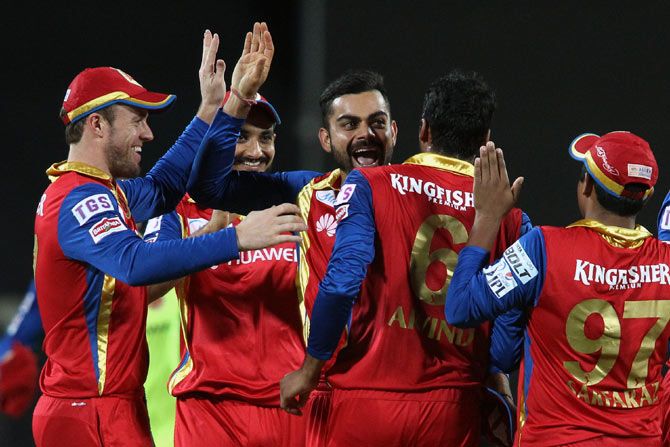 Rajasthan's surprise capitulation reduced it to a lop-sided affair and their total was the lowest in the Play-off matches of the IPL.

They lost in-form Shane Watson and Sanju Samson cheaply and the onus lay on Rahane and skipper Steve Smith to bring the side back in the contest.

The two looked like raising a partnership but David Wiese dismissed Smith (12) at the start of the ninth over with only 55 runs on the board.

With no support from the other end, Rahane was left with no option as he looked to attack Yuzvendra Chahal, but was caught by de Villiers. 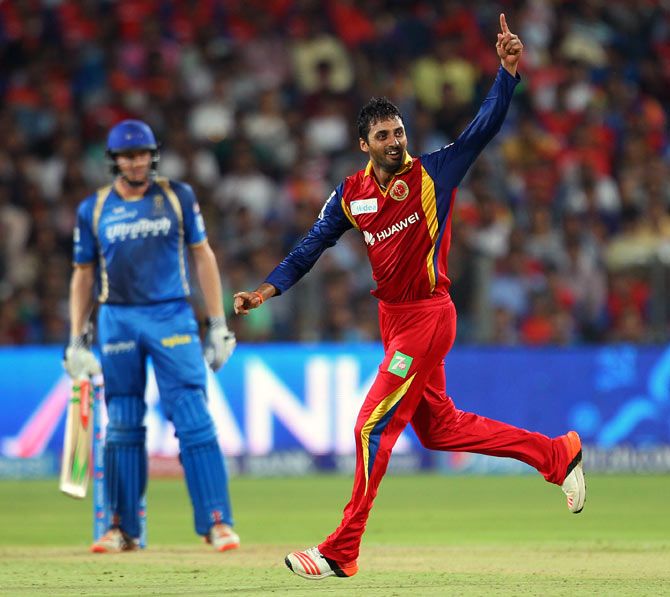 All-rounder James Faulkner was dismissed in a bizzare fashion as the Australian hit a low full toss from Sreenath Aravind, the edge hit the toe of the batsman and flew towards the bowler, who took an easy catch on his follow through.

The lower order also perished pretty cheaply as Rajasthan came up with a disastrous showing with the bat in the knockout match.

The wickets were spread around evenly as Aravind, Harshal Patel, Wiese and Chahal claimed two wickets each while Mitchell Starc got one wicket. 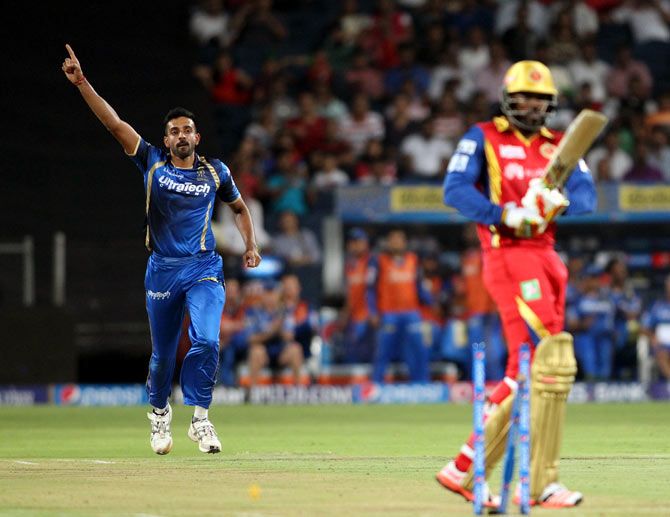 Dhawal Kulkarni (left) celebrates after getting the wicket of Chris Gayle. Photograph: BCCI

Earlier, after electing to bat, RCB had managed only 60 runs in the first 10 overs but thanks to sensible batting by de Villiers and Mandeep, the team changed gears in the final overs to hit 120 runs from the final 10.

It was Mandeep, who provided the impetus initially in the middle overs and later de Villiers also joined the party.

Rajasthan managed to keep the big-hitting Chris Gayle relatively quiet as he hit 27 from 26 balls before he was bowled by Dhawal Kulkarni in the sixth over.

In his next over, Kulkarni jolted the rivals by scalping the key wicket of Virat Kohli (12), who handed a simple return catch to the bowler off a leading edge. 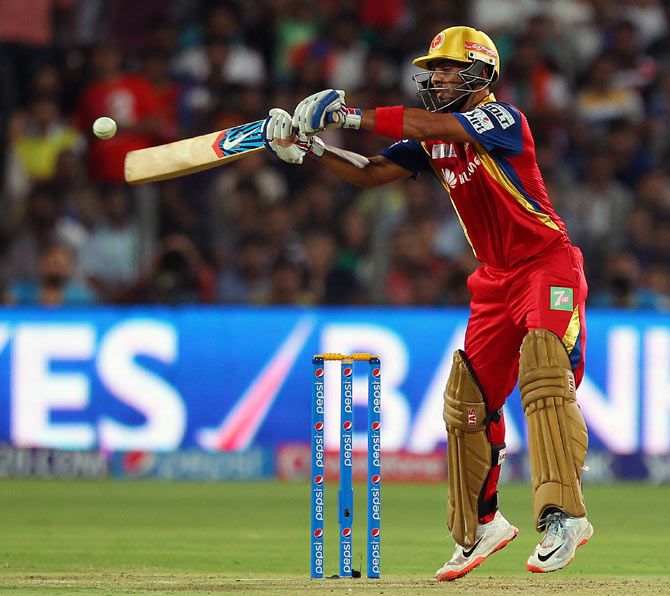 Mandeep and de Villiers struggled to lift the momentum initially before the South African broke the shackles with a six off spinner Ankit Sharma, bringing up 100 for RCB and also the 50-run stand with Mandeep.

He hit another six and a four in the same over, to get 19 runs from the over.

De Villers was run out in the penultimate over before Mandeep completed his fifty with a six and a four off James Faulkner.