The world's No.3 ODI bowler leaked 110 runs off nine overs as England racked up a gigantic 397 for six after electing to bat against Afghanistan. 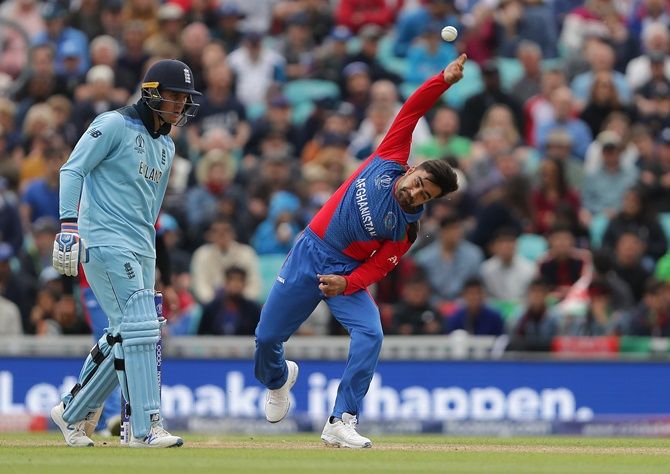 Afghanistan leg-spinner Rashid Khan endured the ignominy of becoming the most expensive bowler in World Cup history during their match against hosts England at Old Trafford on Tuesday.

The world's No.3 ODI bowler,leaked 110 runs off nine overs as England racked up a gigantic 397 for six after electing to bat.

The 20-year-old spinner, who plays for Sunrisers Hyderabad in the Indian Premier League, was in the firing line of English batsmen Eoin Morgan (148), Jonny Bairstow (90) and Joe Root (88) on a flat pitch.

The record earlier belonged to New Zealand's Martin Snedden, who had conceded 105 runs for two wickets against England in the 1983 World Cup.

Ahead of Tuesday’s match, Rashid had taken one for 52 against Australia, before snapping two for 17 against Sri Lanka. He leaked 45 runs without taking a wicket against South Africa.

His woeful figures also makes him the joint-second most expensive in ODI history. Pakistan's left-arm Wahab Riaz had leaked 110 runs in 10 overs against England in August 2016.

The leg-spinner came in for sharp criticism from Iceland cricket

"We've just heard that Rashid Khan has scored Afghanistan's first century of the #CWC19! Wow! 110 from 56 balls. The most runs ever scored by a bowler in the World Cup or something. Well batted young man. #ENGvAFG #AFGvENG," read a tweet by Iceland cricket.

However, former England all-rounder Luke Wright and pacer Stuart Broad came out in support of the bowler.

"Rubbish tweet. Rather than trying to be funny why not be respectful to someone that has done so much for cricket and especially associate members," wrote Wright in his handle.

While Broad wrote: "He is a world class bowler & a delight to watch. Everyone has bad days in our sport."