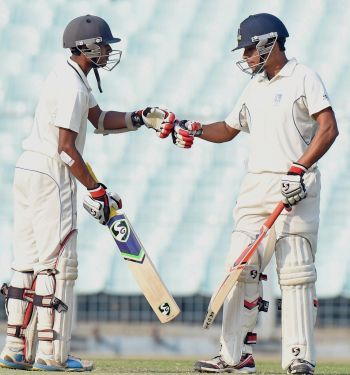 An all-round show by Manoj Tiwary put Bengal in the driver's seat against Jammu & Kashmir on the third and penultimate day of their Ranji Trophy Group A fixture at the Eden Gardens.

The part-time legspinner Tiwary (2/19) claimed two wickets including that of J&K top run getter Bandeep Singh (73) to bowl the visitors out for 315 in their first essay, giving Bengal a handy 72-run first innings lead.

The stylish Bengal batsman then decimated the J&K attack, scoring an unbeaten 52 off 37 deliveries as they ended the day at 216 for three, a total lead of 288 runs.

Having already ensured three points on basis of their first innings lead, Bengal bowlers would hope that the dead looking Eden Gardens surface aid them on the last day to give them a chance to pocket six points with an outright win.

Bengal approached their second innings positively as the opening pair of Abhimanyu Easwaran (63) and Arindam Das (60) put on 126 runs together at a healthy 4.0 run rate.

Both the openers fell in successive overs but Tiwary was full of elegance as he ensured that Bengal hold on to the momentum with Sudeep Chatterjee giving a perfect support with a 21-ball 29 (4x4) before becoming a victim to J&K skipper Parveez Rasool.

But after that Tiwary stitched an unbroken 36 runs with first innings centurion Wriddhiman Saha (8 batting) as the duo ensured that Bengal scored at 4.90 runs per over so as to give them an ideal score to defend in the J&K second innings.

But it was Bandeep, who stood tall and took them past the follow-on mark of 237 with No. 9 Ram Dayal who also prove to be a thorn for the Bengal bowlers with a gritty 62 not out.

The two added 90 runs in a crucial eighth-wicket partnership to save the follow-on before Tiwary finally gave Bengal the breakthrough in the second over after lunch.

Tiwary claimed a second in the form of Mohammed Mudhasir to wrap the issue in a fine spell of 3.5-0-15-2.

Indore: Manish Pandey (193) missed out on a double hundred even as Shreyas Gopal (124) hit his second first class century as Karnataka took a healthy 213-run first innings lead over Madhya Pradesh in their Group A Ranji Trophy match in Indore.

Resuming at 214 for three, Karnataka ended day three at a formidable 516 for eight in reply to Madhya Pradesh's 303 all out at Holkar Cricket Stadium.

Pandey, who started the day at individual score of 92, lost his overnight partner Karun Nair (36) in the seventh over of the day when paceman Puneet Datey had the latter caught by Saransh Jain.

Wicket-keeper Chidambaram Gautham also went back cheaply but Gopal went about his business with quite impressively as he raised a huge 192-run stand with Pandey for the sixth wicket.

Yogesh Rawat not only broke the stand but also denied Pandey his double ton by having the young batsman caught behind. Pandey's 193-run knock came off 351 balls with 15 boundaries, including a six.

Gopal went on to score his second first class hundred, scoring 124 before becoming the third victim of Rawat in the fag end of the day. He hit 13 shots to the fence.

Madhya Pradesh 1st innings: 303 all out

Pune: Pacer Shrikant Mundhe ripped through Rajasthan's line-up as Maharashtra thrashed the visiting side nine wickets on an eventful third day of their Ranji Trophy Group B cricket match.

Overnight 274 for nine in their first innings, Maharashtra folded without adding anything to their tally before bowling out Rajasthan for 106.

Chasing a paltry target of 103, the home team romped home in 19.3 overs with opener Swapnil Gugale smashing an unbeaten 66-ball 56, which included seven fours and a six.

The foundation of the victory was, however, laid by Mundhe. His six wickets cost merely 38 runs in 13.4 overs, an effort which left Rajasthan in dire straits.

Aristh Singhvi was the highest scorer for Rajasthan with 19 runs even as seven of the visiting batsmen departed without touching the double digit mark.

Set a small target, Maharashtra literally sailed through with Gugule's innings being the best.

Clinical Delhi pick up 19 wickets in a day

New Delhi: Delhi's clinical performance in the season continued as they made a mockery of a below-par Odisha, snaring as many as 19 wickets on a single day, to win by an innings and 150 runs in a group league match of the Ranji Trophy.

Having scored 353 in their first essay, Delhi's spin troika of Manan Sharma, Shivam Sharma and Varun Sood dominated the proceedings sharing 14 of the 20 wickets among them with Odisha scoring 118 and 85 in their two innings.

Starting the day at 25 for one, none of the Odisha batsmen showed any guts to fight it out on a pitch where batting was certainly difficult but not impossible. Left-arm spinner Manan, with match-haul of 8/33 including a 6/24 in the second innings, put it aptly.

Delhi now play three away games but with 30 points in their kitty after five matches, the team is almost through to the quarter-finals for the first time after the 2009-10 season.

Odisha neither had the quality nor the tactical acumen to battle it out or try and eke out a point from the game.

While none reached an individual score of 30 in the first innings, the worst part was the technique that Odisha players showed. Either they were way too attacking, playing some rash shorts or way too defensive with so many close-in fielders in the cordon.

Meanwhile wicketkeeper Puneet Bisht was dropped from the squad for the remaining group league matches with Rahul Yadav coming in his place.

Young pacer Navdeep Saini also has a stress fracture and will be out for four weeks.

Ahmedabad: Openers Jiwanjot Singh and Uday Kaul hit half centuries as Punjab reached 219 for 4 in their first innings in reply to Gujarat's mammoth 513 for 8 on the third day of their Ranji Trophy match.

Jiwanjot (76) and Kaul (77) shared 153 runs for the opening wicket in 66.6 overs to give a strong foundation of Punjab reply at the Sardar Patel Stadium at Motera.

But, once the duo were out in quick succession, Punjab struggled, with captain Mandeep Singh and India discard Yuvraj Singh dismissed cheaply for 27 and 14 respectively.

Yuvraj, who has hit three centuries this season, fell to off-spinner Rujul Bhatt towards the close of the day's play.

At close of play, one-down Taruwar Kohli and Sarabjit Ladda were batting on 21 and 0 respectively.

For Gujarat, Bhatt took two wickets while Nileshkumar Chauhan and Ramesh Powar got a wicket each.

New Delhi: Railways skipper Mahesh Rawat and Rohan Bhosale struck fighting half centuries before Baroda came back to leave the battle for the decisive first innings lead slightly in their favour on day three of the Ranji Tropy Group A match.

On a rare sunny day in the Delhi winter, 93 overs were bowled with Railways reaching 251 for seven at stumps, trailing Baroda's 298 by 47 runs.

Arnab Nandi (16*) was left stranded at the crease after Ashish Yadav (31) shouldered his arms to an Irfan Pathan (2/49) delivery that held its line.

Both teams know the value of the gaining the first innings lead going into the final day tomorrow. Only 11.5 overs could be bowled yesterday due to inclement weather.

Wicket-keeper batsman Rawat (50), who stitched a vital 83-run stand with Bhosale (76) for the fifth wicket, remained confident of getting past Baroda's total.

Rawat hit some elegant fours in his 73-ball knock, especially the wristy flicks before being adjudged leg before wicket off left-arm spinner Swapnil Singh (2/65).

Bhosale, who was hospitalised after being hit on the back of the neck in the last game in Chennai, showed remarkable grit to hang around for 222 balls. Though he surely had luck on his side after being dropped twice.

He was trapped in front of the stumps by Yusuf Pathan (2/53). 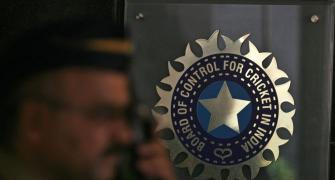 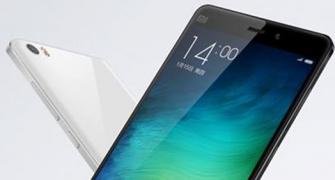 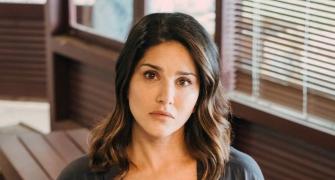 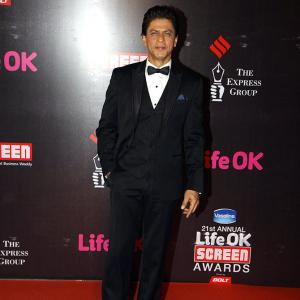