Punjab rode on some brilliant batting by India discard Yuvraj Singh to thrash Haryana by 120 runs in the Group B Ranji Trophy match in Patiala on Wednesday. 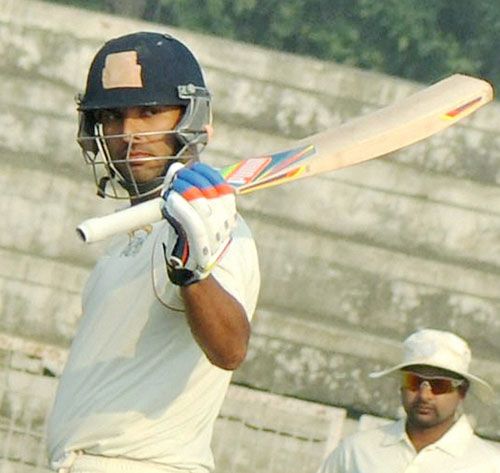 The man-of-the-match made it count for the Mandeep Singh-led side by scoring 59 in the first innings and a brilliant 130 in the second.

Looking to pick up the final seven wickets on the fourth and final day of the encounter, Punjab’s bowlers completed the formalities by packing off Haryana for 200 runs early in the third session.

Getting behind a 321-run chase, Haryana started Wednesday on 26 for three, but only Sachin Rana (86) put up a fight as Punjab’s pace spearhead Sandeep Sharma, left-arm spinner Rajwinder Singh and leg-spinner Sarabjit Ladda picked three wickets each.

Haryana off-spinner Jayant Yadav did his bit by picking six wickets in the first innings to restrict Punjab to 273 and then scored an unbeaten 51 to help the visitors post 283 and get a 10-run lead.

But the match slipped from Haryana's grasp from there on as Punjab’s batsmen did enough to bag six points.

turned out to be a thrilling Ranji Trophy A Group encounter in Bengaluru.

Sreenath had a very good run in the match, hauling eight wickets and conceding 61 runs in the two innings. His second innings figures of 4 for 9 stood out as the best in the whole match.

In the first innings too, he picked four wickets for 52 runs.

Sent in to bat, Tamil Nadu dismissed Karnataka for 290 in the first innings after Kunal Kapoor (87) and Chidambaram Gautam (94) rallied the hosts after early blows on the first day of the match.

Riding high on superb knocks from the blades of Robin Uthappa (76) Mayank Agarwal (80), 77 by Stuart Binny in the first session of the final day helped the hosts set a herculean target.

Chasing 368 on the fourth and final day, the Tamil Nadu batsmen did not have an answer for quality bowling by Sreenath and Vinay, who used the morning conditions to their advantage and scalped four wickets before lunch was taken.

After posting a mammoth 479 in their only innings in the four-day encounter, Himachal shot Services out twice to gain seven points at the Palam A Ground, Model Sports Complex.

Himachal pace spearhead Vikramjeet Malik, who picked five wickets in the two innings and managed a crucial 59 batting at No.10, was declared the man-of-the-match.

If the bowlers did their bit then the batsman made sure that the Bipul Sharma-led team had to just bat once in a lopsided affair.

Opener Ankush Bains and Rashmi Praida gave Himachal a great start in response to Services first innings score of 226. But it was the lower-order that made it count the most with batsmen number eight, nine, 10 and 11 contributing 226 runs in the final onslaught.

Nikhil Gangta stood out with his resilient 99 as last-man Pankaj Jaiswal also contributed with an unbeaten 41.

In their second innings, Services batsmen again failed to convert starts into big scores and could only muster 224 before being bundled early in the third session of the fourth and final day.

Skipper's knock by Shukla as Bengal get 3 points vs Baroda

Skipper Laxmi Ratan Shukla (105 not out) scored his ninth century in first-class cricket as Bengal started their campaign on a positive note logging three points in an away game against Baroda in the opening round fixture in Vadodara.

Bengal got those three points by virtue of first innings lead of 101 runs. On the final day, Bengal batted out 82.1 overs to score 246 for nine as their overall lead swelled to 347 runs.

The moment Shukla hit off-spinner Deepak Hooda for his third six to complete a well-deserved ton, the two captains decided to call off the proceedings.
Shukla got good support from debutant Subhojit Banerjee (44), who played the role of a sheet anchor to perfection playing 141 balls and hitting five boundaries in the process.

Shukla-Banrejee duo added 92 runs for the sixth wicket when Bengal were in a spot at 105 for five in the 46th over and lead only of 206 runs.

Shukla on his part played 119 balls to hit 16 fours and three sixes. He was severe on all the Baroda bowlers even when half of the side was back in the hut.

Hosts Maharashtra collected three points on the basis of taking the crucial first-innings lead in their Group B match against Odisha in Pune.

In their second innings, Odisha scored 178 for five before the final day's play ended at the Maharashtra Cricket Association Stadium.

Maharashtra had responded with 371 all out after Odisha were bowled out for 311 in their first innings. On the fourth day Natraj Behera, who had made 66 in the first-innings, top-scored for Odisha with a knock of 74 that came off 189 balls. The opener struck eight boundaries during his 274-minutes stay at the crease.

Akshay Darekar was the best bowler for Maharashtra, returning figures of 3/32 in 19 overs, while Samadh Fallah and Shrikant Mundhe had a wicket each.

An unbeaten 124 by middle order batsman Robin Bist helped Rajasthan salvage a draw against Gujarat in the Group 'B' match at the Sawai Man Singh Stadium.

Chasing a victory target of 412 runs, Rajasthan resumed the day at a precarious 34 for three.

Rajasthan despite a cracking 41 from southpaw Ashok Menaria, were tottering at 117 for four but Bist and Rajesh Bishnoi (35) put on a fighting 115 run partnership for the fifth wicket.

Bist, who had recently scored a hundred in the Duleep Trophy against South Zone, again served a reminder to national selectors with his fighting ton.

For Gujarat Ishwar Choudhary was the highest wicket taker scalping 4 for 71. Gujarat earned three points on the basis of first innings lead while the hosts could get only one point.

Andhra's Srikar Bharat struck a patient century to prevent Hyderabad from running away with full points as their Group C match ended in a draw in Visakhapatnam.

Resuming at their overnight score of 24 for no loss, Andhra scored 215 for two in 82 overs in their second innings on the fourth and final day's play at the Y S Rajasekhara Reddy ACA-VDCA Cricket Stadium.

Bharat struck an unbeaten 130 off 260 balls with the help of 12 fours and added 149 runs for the second wicket with skipper Mohammad Kaif (46).

Responding to Hyderabad's 522 in the four-day encounter, the Kaif-led Andhra had slumped from their overnight score of 121 for no loss to 369 all out and fell short by just three runs to avoid follow-on.

Image: Punjab's Yuvraj Singh celebrates his century against Haryana during their Ranji Trophy match in Patiala. 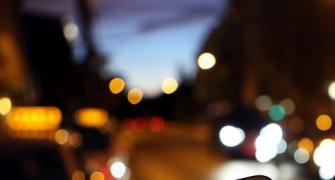 Police urges US woman to file complaint against Uber driver 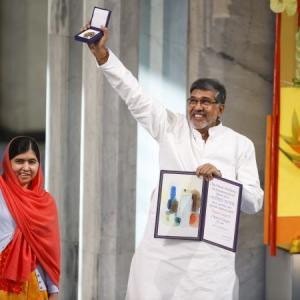 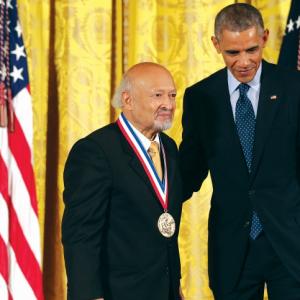