Sudip Chatterjee struck an elegant century under pressure before Prgyan Ojha terrorised Vidarbha with a five-for to put Bengal in command against Vidarbha on the second day of their Ranji Trophy Group A cricket match in Kolkata on Sunday. 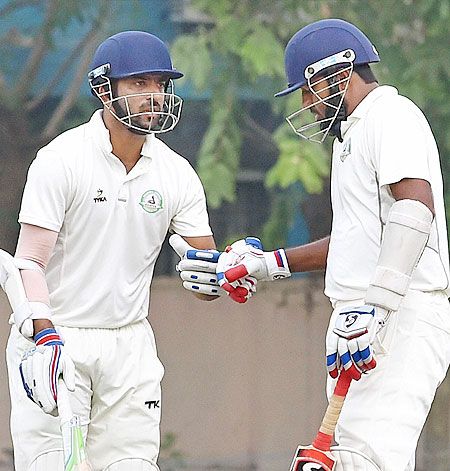 On a day when Vidarbha’s Wasim Jaffer of became the first batsman to notch up 10,000 runs in the tournament’s 81-year history, it was the hosts who brightened their hopes for their first outright win this season at the JadavpurUniversity second campus ground in Saltlake.

Resuming at 217 for seven, Bengal rode on Chatterjee's fighting 116 (200b; 14x4, 1x6) with the lower order to post a fighting 334 in the first innings on a track that started to assist spinners.

This was Chatterjee's third century from five matches this season, and fourth from 21 first-class outings.

In reply, Vidarbha closed the day with 193 runs in arrears after being 141 for seven with Ojha (5/30) notching up his first five-wicket haul for Bengal, and 23rd overall.

Ojha was at his best in his second spell when he scalped four wickets in 37 balls that included two in two balls -- Subramaniam Badrinath (2) and Shalabh Shrivastava (0) – and was in line for a hattrick as he broke the Vidarbha's back.

Centurion in their win against Maharashtra in their last outing, Faiz Fazal (63 from 120 balls; 6x4s) fought a lone battle but the left-handed opener too was dismissed when Ashok Dinda castled him.

Earlier in the day, Chatterjee, who was unbeaten on 49, showed fine application to hung in and got fine support from Ojha (unbeaten on one) who batted at no 9.

Chatterjee struck back-to-back fours to Shrikant Wagh in the second and third balls of the 112nd over to reach his third century this season as it came off 186 balls with 12 boundaries.

Delhi resumed their first innings at 157 for four and were dismissed for 230, to take a crucial 150-run lead.

Playing only his second first class game, Shorey resumed at 57 and remained unconquered but others struggled. His 104-run knock came off 176 balls with nine fours and four shots over the ropes.

Delhi bowlers made up with another strong bowling performance as they bowled out the visitors for just 176.

Many Maharashtra batsmen got starts but they could not convert them into big ones. Left-arm spinner Manan Sharma was the most successful bowler for Delhi with four for 47.

Mysore: Karnataka secured the first-innings lead after their batsmen guided the hosts to a solid 255 for three in their Ranji Trophy Group A cricket match against Odisha on Sunday.

Robin Uthappa top-scored with an unbeaten 83 off 181 balls, while opener Mayank Agarwal struck 78 off 149 balls as Karnataka took a lead of 23 runs with seven wickets remaining at the Srikantadatta Narasimha Raja Wadeyar Ground.

At stumps on day three, Karun Nair was giving Uthappa company on 52..

Abhishek Reddy made 36 off 102 balls with the help of two fours and a six.

Resuming at overnight score of 16 for no loss, Karnataka lost Ravikumar Samarth for the addition of just three runs in the day's first over.

After Agarwal's departure, with the team score reading 128 for three, Uthappa and Nair were involved in an unbeaten century stand and took the team past the visiting side's total of 232 all out.

Uthappa hit seven fours and a six, while Nair found the fence thrice and cleared it once.

Lahli: On a day that saw 16 wickets fall, Haryana lost three wickets quickly in their second innings but still managed to stretch their overall lead to 63 runs in their Group A Ranji Trophy cricket match against Assam on Sunday.

At stumps on day two, Haryana were struggling at 15 for three, with Arup Das (2/5) doing the bulk of early damage.

Earlier, resuming at overnight 140 for seven, the hosts were bowled out for 168 as Assam medium pacer Krishna Das returned impressive figures of 6/56.

Ashish Hooda was the most successful bowler for the home side, picking up four wickets for 27 runs. Harshal Patel had three while Mohit Sharma picked up two wickets.

Starting their second innings with a handy lead of 48 runs, Haryana were in trouble straightaway as Arup Das and Krishna Das struck three quick blows to leave the match evenly poised.

Nitin Saini (11) and Himanshu Rana (0) were the two unbeaten batsmen at the crease when thumps were drawn for the day.

Mumbai: Uttar Pradesh were fighting with their backs to the wall in quest of the first innings leadafter Mumbai ran up a mammoth, season-high score of 610 for nine declared on day two of the four-day Ranji Trophy Group B game at the Wankhede Stadium on Saturday.

In reply, UP plodded their way to 51 for no loss in 27 overs, trailing the home team by 559 runs, with left-handed openers Tanmay Srivastava (30) and Himanshu Asnora (21) at stumps after batting for the entire final session of play.

In the morning, Mumbai commenced at their commanding overnight score of 407 for 4 and with Rohit Sharma at the crease on an impressive 110, there were hopes of some sparkling stroke-play.

However, in the second over, Sharma flashed outside the off stump against medium pacer Ankit Rajput and perished for 113, after a 206-minute stay at the crease. He hit 13 fours and a six.

The UP bowlers then kept things tight though they could not produce something extra to defeat the new pair of overnight unbeaten Siddhesh Lad and Abhishek Nayar.

The runs came at a trickle as the two batsmen added 90 runs in two and a half hours before left-handed Nayar departed for an unconvincing 42 off 113 balls, in the second over after lunch.

Lad, at the other end, was slightly more enterprising and hit ten fours and a six in his 176-ball essay that consumed 281 minutes.

Shardul Thakur came at the fall of Dhawal Kulkarni and made a brisk 56 off 61 balls, striking six fours and a six.

Lad finally fell to leg spinner Piyush Chawla while Thakur holed out in the deep in the first over from part time bowler Umang Sharma.

Gwalior:  Rajat Patidar struck a strokeful century to help Madhya Pradesh gain a first-innings lead of 20 runs on the second day of their Ranji Trophy cricket match against Railways on Sunday.

Patidar hit 113 off 131 balls with the help of 18 fours to do the bulk of scoring for Madhya Pradesh as the home side were all out for 276 in reply to Railways' first innings total of 256 at the Captain Roop Singh Stadium.

Captain Devendra Bundela and Rameez Khan contributed 47 and 53 respectively to resist Railways' threat after Madhya Pradesh began the day at a precarious 7 for 2, trailing by 249 runs.

Patidar took charge and had a dogged Naman Ojha (31 off 151 balls) for company at the other end. The two put on 136 runs off 224 balls. Railways managed to keep themselves in the hunt and bowled MP out for 276.

For the visitors, leg-spinner Karn Sharma took 5 for 102 while Anureet Singh got three wickets for 40 runs.

Railways also made a shaky start in their second innings as they finished the day at 42 for 1 after 16 overs for an overall lead of 22 runs. Ashish Singh was bowled in the third over off the bowling of Jalaj Saxena.

Rain washes out 2nd day's play between TN and Andhra

Chennai:  Persistent rainfall forced the umpires to abandon the second day's play without a ball being bowled in the Ranji Trophy Group B match between Andhra and Tamil Nadu on Sunday.

Electing to bat, Andhra were bowled out for 203 in their first innings on Saturday.

In reply, Tamil Nadu played just one over last evening and are yet to open their score.

The on-field umpires made three inspections before deciding to abandon the day's play at 3.00 pm local time.

Gujarat in command against Baroda after Day 2

Valsad: Gujarat rode on valuable contributions from the middle-order to post a mammoth 505 all out and then reduce Baroda to 82 for three to take the upper hand in their Ranji Trophy Group B match on Sunday.

Starting their first innings at the overnight score of 281 for four, Indian ODI team all-rounder Axar Patel scored a brisk 81 off 90 balls while Rush Kalaria (68), Rujul Bhatt (61) and Manpreet Juneja (55) made half-centuries to guide Gujarat beyond the 500-run mark that came in 148.2 overs.

Earlier, openers Priyank Panchal (128) hit a century and Smit Patel made 57 to give a fillip to Gujarat's innings.

India discard Irfan Pathan, returning to action after a long injury lay-off, stole the limelight with the ball for Baroda, picking up six wickets for 47 runs.

In reply, Baroda were struggling at 82 for three in 31 overs.

Aditya Waghmode (38) and Abhimanyu Chauhan (31) got starts before being dismissed.

At stumps, skipper Ambati Rayudu (4 not out) was unbeaten at the crease along with Deepak Hooda (3 not out).

Dharamsala: Captain Soumik Chatterjee struck an unbeaten fifty while Aanshul Gupta made 46 to take Services to 105 for no loss in their first innings in reply to Himachal Pradesh's mammoth 531 on the second day of their Ranji Trophy Group C match on Sunday.

Earlier resuming at the overnight score of 352 for four, veteran Paras Dogra, who was batting on

174 not out on Saturday, completed a fine double hundred.

Dogra made 227 off 280 balls with the help of 18 boundaries and eight hits over the fence during his knock.

Malappuram: Kerala rode on Rohan Prem's 118 and Sachin Baby's 70 to score 347 all out in their first innings against Tripura on the second day of their Ranji Trophy Group C match on Sunday.

In reply, Tripura were 118 for two in 42 overs at stumps with opener Udiyan Bose retiring hurt on 52.

Tripura still trail Kerala by 229 runs in their quest for the vital first innings lead.

Earlier resuming at the overnight score of 223 for four, Prem completed a fine century that came off 264 balls. He struck eight boundaries and two sixes.

Besides Prem and Baby, Akshay Chandran (41 not out), Robert Fernandez (37) and MD Nidheesh (34) also made useful contributions with the bat for Kerala.

Rana Dutta (5/50) picked up a five-wicket haul for Tripura.

Jamshedpur: Ishank Jaggi (93) and Kaushal Singh (81) scored half-centuries as Jharkhand continued their splendid batting show to post a mammoth 551 for eight declared against Jammu and Kashmir in their Ranji Trophy Group C match, on Sunday.

The hosts resumed on an overnight score of 304 for three and the batsmen carried forward the good work done on the opening day.

Adil Reshi (7) was at the crease for the visitors.