Robin Uthappa scored a blazing century before suffering cramps as Karnataka finished the first day's play against Railways on 284 for 7, in the Ranji Trophy Elite Group match at the Karnail Singh Stadium in Delhi on Thursday.

For Railways, old guard Murali Karthik (5-76) again proved his worth, claiming his 34th five-for in first class cricket on a track from which he extracted sharp turn and beat the bat on a number of occasions.

However, the first session belonged to Uthappa, who played in his characteristic attacking manner. There were no half measures as he attacked the spin trio of Karthik, Arlen Konwar and Nilesh Chauhan with equal disdain. He scored his first 50 off 62 deliveries and the next came off just 46 balls. His innings of 117 (12th first-class century) contained 10 boundaries and five sixes.

The best of his five sixes was an inside-out lofted drive over extra cover off Chauhan's bowling to reach 50. He was most severe on offie Konwar, who was hit for three sixes  one over long-off, the next over long-on and the third over deep mid-wicket.

He attained his century with a lofted shot off Karthik.

Such was his dominance that in pre-lunch session Karnataka scored 140 for three and Uthappa was batting on 100.

But, as he developed cramps, he did not come out to bat in the post-lunch session and suddenly Railways were back in the game.

It started with a poor dismissal of Manish Pandey, who slapped a full-toss from Karthik straight to Shreyas Khanolkar at mid-wicket. This was after Ganesh Sathish (26) edged a classical left-armer's delivery from Karthik to Sanjay Bangar at first slip after adding 101 runs for second wicket with Uthappa.

The difference after Uthappa was absent can be gauged by the fact that only 119 runs were scored in 49.2 overs in that period.

The post-lunch session saw quick dismissals of CM Gautham (7) and Amit Verma (8), as Karnataka slumped to 165 for five.

Uthappa came in at the fall of the sixth wicket, but wasn't exactly his free-flowing self, and finally edged one off JP Yadav to Karthik in the slips.

Hrishikesh Kanitkar played a captain's knock as defending champions Rajasthan posted a commanding 309 for 4 against hosts Mumbai on the first day of the four-day Elite Group A Ranji Trophy match in Mumbai.

The southpaw stroked powerfully off his back foot to score an unbeaten 129 off 227 balls, inclusive of 17 hits to the fence, on a placid Brabourne stadium wicket.

Things would have looked bleaker for Mumbai, who are gunning for their 40th title, had not Rashmi Ranjan Parida departed on the third ball of the day's last over for a well-made 67 off 112 balls, inclusive of 12 fours.

Medium pacer Dhawal Kulkarni grabbed couple of wickets, but, more importantly, struck in the last over to break the fourth-wicket stand of 137 between Kanitkar and Parida.

The former Orissa batsman impressed with his cover and straight drives.

Earlier, Kanitkar had forged a stand of 77 runs for the second wicket with Vineet Saxena, who scored 53 off 114 balls, with nine fours, before falling to Kulkarni, and 61 for the third wicket with Ashok Menaria (32), who played attractively before being dismissed by part-timer Suryakumar Yadav.

Mumbai used as many as nine bowlers on first day, a clear indication of the toothlessness in their attack as well as the benign quality of the wicket at the Brabourne stadium.

Mumbai had early success in the morning when opener Aakash Chopra was trapped leg before by Murtuza Hussain for 19 in the 13th over.

Thereafter, the Rajasthan batsmen took firm control of the proceedings, with Saxena and Kanitkar first steadying the ship.

Mumbai captain Wasim Jaffer kept ringing changes and his idea of bringing in Yadav to bowl his fast leg spin paid dividends as the left-hander Menaria drove one slightly up to short extra cover fielder Rohit Sharma and departed at 172.

This brought together Kanitkar and Parida, who feasted on the wayward Mumbai attack on the good batting track almost till the end before Kulkarni got the important breakthrough with his third ball, a full length one, in the last over to send back the latter.

Out-of-favour India spinner Harbhajan Singh captured just one wicket, but rookie seamers Sandeep Sharma and Brainder Sran made up for that by sharing seven between them, which reduced Orissa to 246 for nine on day one.

After Harbhajan elected to field, right-arm medium pacer Sharma and left-arm seamer Sran -- both aged 19  vindicated their skipper's decision by reducing Orissa to 152 for seven at one stage.

While Sharma finished the opening day of the Group A Super League encounter with impressive figures of four for 52, Sran had three for 62.

Subhrajit Sahoo proved the saving grace in a disastrous middle-order showing, scoring 56 runs, which he earned through 144 minutes of sheer hard work.

Basant Mohanty (58 not out) and Deepak Behera (47) then gave the top-order a lesson in batting by adding 83 valuable runs for the eight wicket, which took the visitors to a respectable position.

Both Mohanty and Behera hit eight boundaries during their stay at the wicket.

Harbhajan bowled 18 overs while conceding 44 runs for the wicket of Lagnajit Samal.

Captain Parthiv Patel (100) and Niraj Patel (111 not out) scored centuries each as hosts Gujarat amassed 358 for 6 against Delhi at stumps on the opening day in Valsad.

Opting to bat, Parthiv led from the front, scoring his ton off just 120 balls, while Niraj remained unbeaten on 111 that came off 203 deliveries to guide Gujarat to a comfortable position.

However, Gujarat's start to the innings was far from rosy as they lost opener Priyank Panchal early, with the scoreboard reading seven.

Young left-arm orthodox bowler Vikas Mishra (4-67) then bowled Barot to scalp the first of his four wickets and produce the breakthrough for Delhi.

Parthiv became Mishra's second victim, caught by Unmukt Chand in the 37th over of the innings. The diminutive left-hander struck 12 boundaries and a six during his stay at the crease.

Mishra also accounted for the wickets of Pratharesh Parmar (23) and Jesal Karia (21) before Niraj and Salil Yadav (28 not out) shared an unbroken seventh-wicket stand of 50 to give Gujarat the upperhand at close of play.

Apart from Mishra, the pace duo of Pradeep Sangwan and Parvinder Awana took a wicket each.

Baroda in command against Madhya Pradesh

Baroda shot out Madhya Pradesh for a paltry 63, the pacers accounting for nine wickets as the home side took control of their Ranji Trophy Elite Division match on the opening day in Vadodara.

India discard Irfan Pathan claimed three wickets while his Firdaush Bhaja and Murtuja Vahora bagged four and two respectively as Madhya Pradesh were all out in just 27.3 overs after being put in to bat.

Just two Madhya Pradesh batsmen -- captain Devendra Bundela (10 not out) and Anand Rajan (14) -- could reach double digits before perishing one after another at the Moti Bagh Stadium.

Rajan scored his 14 from 25 balls while the extras made up 10 runs.

In reply, Baroda were 207 for four at stumps, with Ambati going strong on an unbeaten 80. Aditya Waghmode was unlucky to miss a century by a run.

While Waghmode smashed 17 fours during his 152-ball knock, Raydu hit 10 boundaries and two sixes while facing 117 balls during his 159-minute stay at the crease.

Baroda have two points from their opening match against Tamil Nadu, in Chennai, which was declared drawn after being washed out by rain.

This is Madhya Pradesh's first match of the season.

Priyank Tehlan's solid 95 helped Haryana overcome a middle-order collapse and end the opening day against Tamil Nadu on 264 for seven, in Chennai.

Opting to bat, Haryana openers Nitin Saini 43 (97b, 3x4) and Rahul Dewan 22 (57b, 3x4) provided the platform, making 48 runs between them when the latter was dismissed off Sunny Gupta.

When Nitin was looking to consolidate their innings with Abhimanyu Khod (14), Gupta dismissed the latter.

At that stage, Balaji struck thrice to leave the visitors at 89 for four. Haryana were 90 for five in 36.5 overs at lunch.

At close, Dhruv Singh was unbeaten on 12 with Mishra. 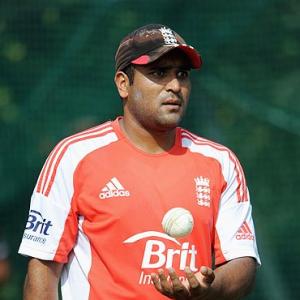