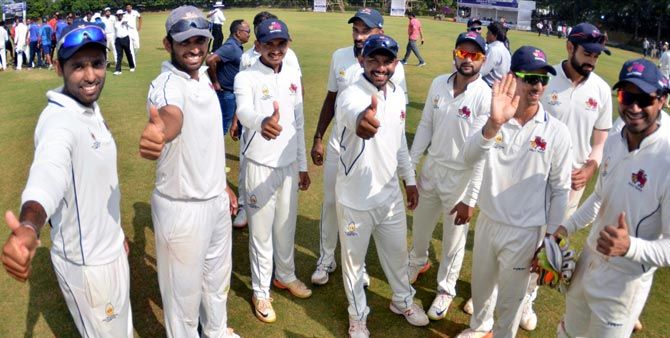 Mumbai registered their first victory of the season, thrashing Odisha by 120 runs in a Group ‘C’ Ranji Trophy match, at the KIIT Stadium in Bhubaneshwar, on Saturday.

Resuming at the overnight score of 93 for 4, Odisha capitulated in less than two sessions as Akash Parkar and Dhawal Kulkarni finished with three wickets each.

Chasing 413 for an unlikely win, the home side was never in the hunt, losing wickets at regular intervals. Only captain Govind Poddar offered resistance, with a knock of 87.

Poddar put on 90 runs with Shantanu Mitra (49) before falling to Abhishek Nayar, who also ended Biplab Samantaray's doughty resistance, by having hom bowled for 31.

Some lower-order resistance delayed the visitors' victory, with Suryakant Rawat hitting three sixers in his 21-ball 32.

Following the victory, the 41-time Ranji champion moved to 10 points in the group.

Mumbai next meets Baroda at home in what will be their 500th Ranji Trophy game, beginning November 9.

Odisha will take on Tamil Nadu in its next fixture at Cuttack from November 9.

In other Group ‘C’ games, Andhra Pradesh cruised to an eight-wicket win over Madhya Pradesh at Vizianagaram to gain six points.

Subsequently, Andhra moved to the top of the points’ table with 15, one more than MP.

Bengal settle for 3 points after frustrating draw vs HP

Having conceded a huge 213-run lead, Himachal Pradesh gave a better account of themselves, scoring 353 in the second innings, courtesy contributions from Priyanshu Khanudri (95), Prashant Chopra (81), Nikhil Gangta (57) and Dhawan (51 not out).

Mohammed Shami (5/109) and Ashok Dinda (3/74) could not recreate the magic of the first innings as Dhawan played 90 balls and, more importantly, had a ninth-wicket stand of 39 with Sidharth Sharma (1) which consumed an hour-and—a-half's play.

A target of 141 in the final session under fading light was next to impossible and Dhawan's four-wicket burst ensured that the captains decided to shake hands when Bengal were 65 for 4 in 15 overs.

India pacer Shami wrapped up the tail en route his sixth five-wicket haul in first-class cricket but by then HP had done enough to get a point.

Bengal took it up positively, promoting Wriddhiman Saha to open the innings but first innings centurion Raman (0) was out first ball -- a mistimed pull-shot off Dhawan.  India A batsman Sudip Chatterjee (6) and skipper Manoj

Tiwary (2) were sent back in successive overs before Dhawan

Chatterjee (6) edged one to gully while skipper Tiwary was cleaned up with an inside edge as the dismissal forced Saha (34 not out) to play for a draw and secure three points.

It was a moral victory for Himachal having bounced back from being followed-on.

Punjab now lead Group ‘D’ with 15 points while Vidarbha, with 14, are second.

Bengal, who were second, had a definite chance to take the lead but the draw meant they slipped to third place with 13 points.

Bengal have three more matches, against Punjab, Vidarbha and Goa.

Punjab won by an innings and 118 runs.

Nitish, Milind steer Delhi past UP

Uttar Pradesh in their Group A encounter in Delhi.

Delhi, with 16 points from three games, are now second in the group behind leaders Karnataka, who have 20 from an equal number of games.

Starting the day at 224 for 7, UP lasted only 4.5 overs as Navdeep Saini (4/46) polished off the remaining three wickets as the visitors’ second innings ended at 229.

With a minimum of 83 overs to reach the target, Delhi knocked off the runs in 72.1 overs with minimum fuss.

But it was the partnership between Chand and Nitish Rana that yielded 71 runs for the third wicket before the former was dismissed in the 36th over.

He was one short of his first 50 of the season.

Rana, who hit eight boundaries and a six added another 52 runs with Milind, who was a picture of concentration during his undefeated 109-ball knock.

Once Rana was out in the 55th over, Rishabh Pant (26) hit a quickfire 26 off 34 balls to take the team closer before Navdeep Saini smashed three fours and a six in 12 balls to close the match.

Saurashtra beat Jharkhand by six wickets in a Group ‘B’ encounter, bagging six points and move to third in the points’ table.

After following-on, Jharkhand scored 341 in their second innings, courtesy a whirlwind 99 off 75 balls by Nazim Siddiqui, who hit 13 boundaries and two sixes.

Chasing a meagre target of 59, Saurashtra achieved it  in 14 overs despite losing four wickets, including Cheteshwar Pujara (3). 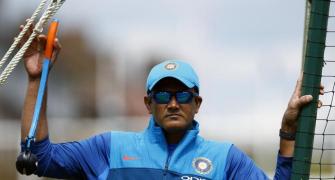 Kumble in running for Coach of the Year award 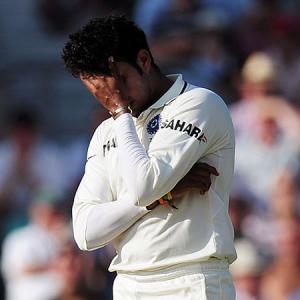 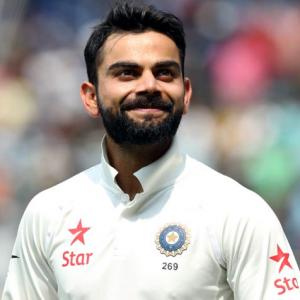