Former skipper Aditya Tare scored his eighth first-class hundred on an inconsequential final day of their Ranji Trophy group A encounter against Railways here on Sunday.

Having ensured three points by virtue of 104-run first innings lead by the end of the third day, Mumbai decided against sporting declaration reaching 321 for 5 when captains decided to call time.

Tare (100 no, 187 balls) and all-rounder Shivam Dube (69 no, 99 balls) added 163 runs for the unbroken sixth wicket stand. Tare's innings had 11 fours and two sixes and Shivam smashed eight fours and a couple of sixes. 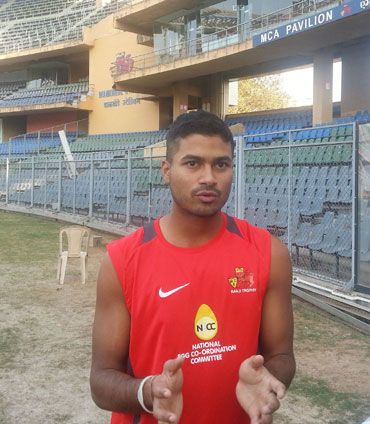 The duo came together when Mumbai were 158 for 5 in their second innings but Tare-Dube didn't feel much pressure as the overall lead had already swelled to 262 runs by then.

Left-arm spinner Harsh Tyagi (3/86 in 36 overs) was the most successful bowler for Railways.

Siddhesh Lad (76, 168 balls) also continued in rich vein of form having scored 99 in the first innings. Lad will however rue the fact that he missed three-figure mark twice during the match and was dismissed by left-arm orthodox on both occasions.

Tamil Nadu captain Baba Indrajith hit an unbeaten century as the team finished at 236 for 4 on the final day of the rain-hit Ranji Trophy Elite Group 'B' match against Madhya Pradesh in Dindigul (Tamil Nadu) on Sunday.

The hosts innings finished at 236 for 4 in 77.4 overs in reply to Madhya Pradeshs 393 as rain intervened again.

The two teams finished with one point each as the first innings was incomplete.

After the third day's play was washed out on Saturday owing to incessant rains, Tamil Nadu resumed its first innings at zero for no loss and saw openers Abhinav Mukund and Murali Vijay negotiate the early spell by MP bowlers to take the score to 43 for no loss.

Vijay, who appeared to be confident in his knock of 19, edged a delivery from Avesh Khan to wicketkeeper Ankit Dane.

Indrajith and his twin brother Baba Aparajith (who came in at No.3) added 80 runs in nearly 30 overs with some enterprising play.

Indrajith was in fine touch and hit some sparkling shots and his partnership with Aparajith gave the innings some impetus.

After Aparajiths exit, the captain was involved in a half-century partnership with Vijay Shankar (17), who didn't look at his fluent best.

Later, Indrajith and B Anirudh Sitaram (28 not out) put on 51 runs for the fifth wicket before rain brought about a premature end to proceedings.

Rajasthan defeated a gritty Jammu and Kashmir by 75 runs in their Elite Group C Ranji Trophy game in Jaipur on Sunday.

Rajasthan bowlers rose to the occasion even as a Jammu and Kashmir skipper Parvez Rasool (110 not out) played a defiant knock in the second outing, albeit which went in vain, at the Sawai Mansingh Stadium.

Chasing a daunting target of 395, Jammu and Kashmir, who began at overnight score of 34/0, were eventually bundled out for 319 in their second innings.

For the hosts leg spinner Rahul Chahar (4-89) and Nathu Singh (4-83) took four wickets each in the second innings, as they earned six crucial points and have stated their campaign on a winning note.

Chahar ended the game with nine wickets as he had taken a five-wicket haul in the first innings.

Uttar Pradesh won by an innings and 247 runs.