The Ranji Trophy Group A match between Mumbai and Jammu and Kashmir was evenly poised at the end of the third day's play, with the visitors finishing on 58 for 1, while chasing a modest target of 237 on a wearing track at the Wankhede stadium in Mumbai on Tuesday.

Jammu and Kashmir, who are meeting the 40-time champions for the first time in the tournament, require just 179 more runs on the final day with nine wickets in hand to cause what will be a major upset at the beginning of the tournament.

But the wearing wicket provides Mumbai a chance to thwart the bid.

At stumps on Day 3, first innings centurion Shubham Khajuria (34) and Bandeep Singh (11) were at the crease.

J&K had taken the first innings honours by grabbing a slender lead of 18 runs, But the hosts batted well in the morning session, recovering  from a shaky 66 for four to cross the 200-run mark before losing a clutch of wickets and being dismissed for 254. , unbeaten last evening on 17 with night-watchman Dhawal Kulkarni (1), played a responsible knock to register his fifth first class century and fourth in the tournament.

Yadav, who threw away his wicket after posting his half-century in Mumbai’s first innings, scored 115 in just under four hours off 158 balls, inclusive of 18 fours.

He received fine support from pace Mumbai spearhead Kulkarni, as the duo slowly and steadily pulled the home team out of the woods with a stand of 152 runs in 204 minutes for the fifth wicket.

But once the combination was broken by Umar Nazir, who induced Kulkarni into an edge to second slip, one of the four wickets he took in the innings, Mumbai’s innings fell apart. It deepened when Yadav was caught in similar fashion off the same bowler -- his seventh wicket of the game.

The injured Wasim Jaffer was unbeaten with four after batting at No. 11.

Nazir's new ball partner, Ram Dayal, then polished off the tail, returning impressive figures of five for 76 in the second innings and eight for 127 in the match.

J&K batted sedately in the run-chase, but lost the wicket of opener Adil Reshi to Shardul Thakur.

Delhi in sight of outright win over Saurashtra

Skipper Gautam Gambhir's decision to play at the Roshanara Club ground is set to be vindicated as his bowlers pushed Delhi to the verge of an outright win over Saurashtra in their Group B match.

At stumps on the third day, Saurashtra, after being forced to follow-on, were 163 for four.

They still require 62 runs to avoid an innings defeat after being shot out for 217 in the first essay and conceding a 225 runs lead. Delhi had scored 442 in their first innings. The visitors were 76 runs short of the follow-on score of 293.

The Delhi bowlers put up a collective effort and it will take a Herculean task for the visiting team’s batsmen to play out an entire day with only six wickets in hand.

The two new ball bowlers, Parvinder Awana and Sumit Narwal, kept a tight leash on the batsmen. Rajat Bhatia, the third seamer, did his usual stuff by bowling to a disciplined line.

Saurashtra’s batsmen showed better application in the second innings as Sagar Jogiyani (48) and Arpit Vasavada (33) added 67 runs for the second wicket in 25.2 overs.

Saurashtra, playing for a point, were 100 for one before pacer Navdeep

Saini, with an outgoing delivery, induced Vasavada to edge one to Unmukt Chand at second slip.

Jogiyani was then cleaned up by seamer Sumit Narwal. The glovesman hit seven boundaries.

From 100 for one, Saurashtra slumped to 100 for three. Another blow was losing skipper Jaydev Shah (14), who got a beauty from Awana that kicked up and the edge flew to Puneet Bisht behind the stumps.

In the morning, Saurashtra started at 152 for six but it was Narwal (3/52), who cleaned up the lower order.

Despite a patient century from opener Prasanth Kumar, Andhra Pradesh failed to avoid the follow-on as Hyderabad’s bowlers made sure that their batsmen's effort did not go waste in the Group C match in Visakhapatnam.

Responding to Hyderabad's 522 in the four-day encounter, the Mohammad Kaif-led Andhra slumped from their overnight score of 121 for no loss to 369 all out and fell short of averting the follow-on by just three runs.

Prasanth (124) was the stand-out performer for the Andhra, striking 17 fours and a six in his 257-ball essay.

Following-on, Andhra were 24 for no loss at stumps with Srikar Bharat and Prasanth fighting on.

Himachal Pradesh’s lower-order proved its worth as the Bipul Sharma-led side gained a sizable first innings lead to take command against Services in the Group C match in Delhi.

Overnight batsman Rashmi Parida (58) was out early but Gangta carried on from where he left and stitched a ninth-wicket 77-run partnership with Karanveer Singh (27).

Then he found a partner in No. 10 Vikramjeet Malik (59) to manage a 75-run 10th-wicket stand to further frustrate the Services bowlers.

Even last-man Pankaj Jaiswal contributed an unbeaten 41 as Gangta was unlucky to be run-out and miss his second first-class century by just one run.

At stumps, the Yashpal Singh-led Services were 91 for three, 162 runs in arrears.

Madhya Pradesh’s middle-order made it count against Railways, the Devendra Bundela-led side building up a vital second-innings lead on Day 3 of the Group A match in Delhi.

After bundling out Railways for 280 early in the first session, the MP bastmen rallied on to finish the day on 212 for five and stretch their lead to 113.

Starting on their overnight score 253 for seven, the Mahesh Rawat-led Railways could not stand the bowling test as medium-pacer Puneet Datey wiped off the tail in quick time to bag a five-wicket haul.

Bundela (41) and Harpreet Singh (69) also made vital contributions to leave the match interestingly poised for the final day.

Openers Robin Uthappa and Mayank Agarwal stamped their class with sparkling half-centuries to put Karnataka in the driver's seat against Tamil Nadu in a Group A match in Bengaluru.

The pair stole the show, scoring 76 and 80 runs respectively, as Karnataka posted 247 for four at close of third day's play, a vital 263-run second innings lead.

Uthappa and Agarwal added 163 runs for the first wicket to almost push Tamil Nadu out of the game on a sporting Chinnaswamy strip.

Though the Karnataka openers hogged the limelight for shipping the team to a point from where they can only get points on the basis of the first innings lead, credit should also be given to Aravind Sreenath, who ran through Tamil Nadu’s innings.

Tamil Nadu could manage just 274 in reply to Karnataka's first innings score of 290.

Sreenath ended up with figures of four for 52 while the hosts' captain, Vinay Kumar claimed 2 for 87) and H S Sharath 2 for 22.

Looking in great form, Uthappa hit ten boundaries in his sparkling knock, before being claimed by Mololan Rangarajan after Baba Aparajith latched on to a catch.

A collective effort by its bowlers put Bengal in driver's seat against hosts Baroda as they took a vital first-innings lead of 101 runs in Vadodara.

After scoring a respectable 455 in the first innings, Bengal bowlers led by spearhead Ashok Dinda (3/92) bowled out Baroda for 354 to ensure at least three points from the match.

At stumps, Bengal were 8/1 losing veteran opener Arindam Das (2), who edged left arm seamer Gagandeep Singh. Bengal's overall lead is now 109 and if they don't commit a major harakiri, then they would at least return with 3 points in their kitty.

An outright win looks unlikely as only a day's play is left.

Baroda would rue for a fact that their U-19 World Cupper Deepak Hooda's (114) ton went in vain as some of the lower order batsmen couldn't provide him with adequate support.

Punjab close in on victory against Haryana

Riding on India discard Yuvraj Singh's brilliant century, Punjab set Haryana a daunting target of 321 runs before reducing them to 26 for three at
stumps on the third and penultimate day of their Group B in Patiala.

Punjab need to take seven more wickets tomorrow to post an outright win, even as Haryana face an uphill task of saving the game with another 295 more runs required for victory.

After bundling out Punjab for 273 in their first innings, Haryana took a slender lead of 10 runs by posting 283 all out. In the second innings, Punjab declared at 330 for six to set a massive target for Haryana. Yuvraj's 130 off just 160 balls, including 14 fours and five sixes, was the highlight.

In reply, Haryana has a disastrous start as lost their top three batsmen for just six runs on the board with medium pacer Sandeep Sharma (3/13) taking all three wickets.

At the close of play, Yuzvendra Chahal was unbeaten on five and Sachin Rana was on 15.

A fine ton by opener P.K. Panchal (110) propelled visitors Gujarat on course of an outright victory against Rajasthan in Jaipur.

After piling up 340 in their first innings, Gujarat restricted Rajasthan to modest 195 and then helped by Panchal raced to 266 for 7 declared to set up a stiff victory target of 412 runs for the hosts who were tottering at 34 for 3 at the close day three still needing 378 runs on last day of the match with seven wickets in hand.

Rajasthan resumed their innings at 172 for 8 and Dishant Yagnik (24 n.o.) helped them avoid follow on but the hosts conceded 145 run first innings lead by crashing to 195 all out.

In their second innings, Gujarat declared at 266 for 7 after a fine century by Panchal. Shailendra Gehlot (4 for 50) and Pankaj Singh (3 for 79) were successful bowlers for Rajasthan.

Facing a stiff victory target of 412 runs Rajasthan batting crumbled again, loosing Sidharth Saraf (12), Vineet Saxena (18) to medium pacer Ishwar Choudhary in quick succession and a little later night watchman Shailendra Gehlot (3) on the last ball of the day by Akshar Patel with just 34 runs on the board. 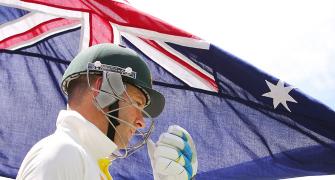 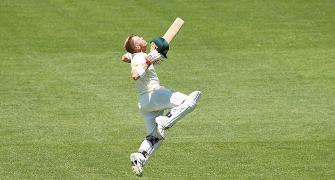 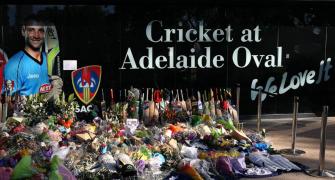 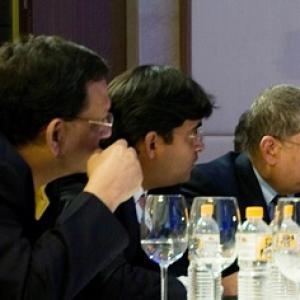