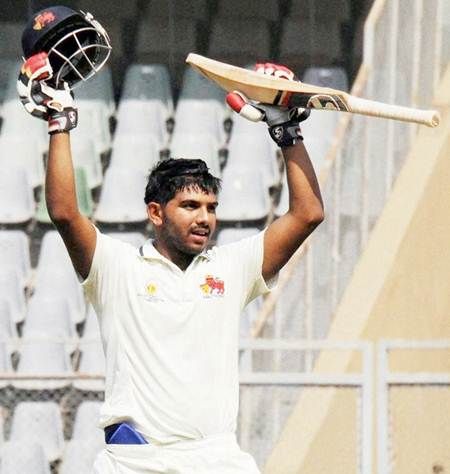 Mumbai rode on unbeaten centuries from Akhil Herwadkar and Suryakumar Yadav to amass 370 for 2 on Day 1 of their Group B Ranji Trophy match against Gujarat at the Wankhede Stadium, in Mumbai, on Tuesday.

Gujarat's hopes of securing at least the first innings lead to enhance their chances of advancing to the quarter-finals took a beating as the hosts, surprisingly asked to bat first by visiting team captain Parthiv Patel, scored at more than four an over to grab the advantage.

Left-handed opener Herwadkar was unconquered at the end of the day after a patient knock of 143 off 257 balls, inclusive of 16 fours and a six.

He was lucky to be let off twice by wicketkeeper and rival captain Patel before getting into the 40s.

Yadav, at the other end, stroked his way to 103 not out off 159 balls - studded with three sixes and nine fours.

The third wicket pair, which joined forces at the fall of one-down batsman Shreyas Iyer (75 off 69 balls, including 10 fours and a six), had added 196 runs before stumps.

Earlier, put in to bat the home team - already assured of a berth in the last eight - raced to 74 before losing opener Jay Bista, who edged  left arm R P Singh to 'keeper Patel, after a breezy knock of 44 that included six hits to the fence.

The ever-aggressive Iyer and Herwadkar then came together to stitch a partnership of 100 runs before the former lost patience and his wicket.

In trying to glide Rush Kalaria over the wicketkeeper's head he only edged the ball to Patel.

To make things worse, the Gujarat captain let off Herwadkar when on 12, a difficult leg-side catch, and missed a regulation stumping when the left hander (39) rushed out to the first ball from left- arm spinner Axar Patel and was beaten.

Taking full advantage of these reprieves, Herwadkar reached his half century off 101 balls. He was more aggressive later and posted his second ton of the season in 196 balls.

Yadav, after the fall of Iyer, stroked his way to a half century before tea in 69 balls and then slowed down a bit before completing his hundred in 148 balls.

Greater Noida: Ambati Rayudu (70) and Aditya Waghmode (56) hit half-centuries as Baroda scored 242 for 5 in their first innings against Uttar Pradesh in their Group B match.

Rayudu's 184-ball unbeaten knock was studded with seven boundaries and a six, while Waghmode hit six fours and a six during his 113-ball stay at the Greater Noida Sports Complex Ground.

At the draw of stumps, Rayudu was at the crease, with Irfan Pathan (18).

Electing to bat, Baroda found themselves in a spot of bother after they lost their opener Kedar Devdhar (0) to the fifth delivery of pacer Praveen Kumar but Waghmode and HH Pandya (31) resurrected the innings before the latter was dismissed by Saurabh Kumar in the 20th over.

Waghmode then joined hands with Rayudu and crossed the 100-mark before the opener was trapped in front of wicket by Praveen as Baroda slipped to 108 for three.

Rayudu then took the onus on himself and shared 55 runs with Deepak Jagbir Hooda (30) and stitched a 49-run partnership with Yusuf Pathan (31) for the fourth and fifth wicket respectively to take Baroda across the 200-mark.

Vidarbha 284 for 6 after Faiz Fazal’s ton

Nagpur: Faiz Fazal led the way with a century as Vidarbha posted 284 for six in their final Group A match against Haryana.

At stumps on Day 1 at the Vidarbha Cricket Association ground, Ravi Jangid (1) was unbeaten at the crease.

Batting first, Vidarbha rode on Fazal's 266-ball knock to post a decent total by the end of the day's play.

Openers Fazal and Aditya Shanware (55) combined to put on 116 runs for the first wicket to give the hosts a sound start.

Fazal then added 92 runs for the fourth wicket with Mumbai veteran Wasim Jaffer (41).

Shanware struck seven fours and a six, while Jaffer hit three boundaries and a six.

Harshal Patel (2-41) and Jayan Yadav (2-97) were the successful wicket-takers for Haryana.

Jaipur: Rajasthan were reeling at 28 for six after bundling out Odisha for 151 in their first innings ont he opening day of their Group A match.

Replying to Odisha's modest total, Rajasthan also had a disastrous start. None of their batsmen got into double digits after two openers -- Manender Singh (10) and Vineet Saxena (11) – were out.

At stumps, Rajasthan were trailing by 123 runs with just four wickets remaining.

Punjab in command after bowling out TN for 68

Dindgul (Tamil Nadu): Punjab took firm control of their Group B match after bowling out Tamil Nadu for a meagre 68 and then extending their first-inning lead to 174 runs, as a staggering 21 wickets fell by the wayside.

Punjab, who chose to bat after winning the toss, lost wickets at regular intervals and were all out for 206 in 57 overs, at the NPR College Ground on Day 1 of the match.

J Koushik (30) was the only batsman to reach double digits in Tamil Nadu's abysmal batting display.

At stumps, Punjab were 36 for one in their second innings.

Indore: Harpreet Singh (81) and Rameez Khan (73 not out) scored a half-century each to help Madhya Pradesh post 261 for nine against Andhra on the first day of their Group B match.

Opting to bat, MP lost three wickets cheaply and were struggling at 39 for three before Harpreet came to the team's rescue.

Harpreet and Rameez put on a crucial 105-run stand for the fifth wicket to take the team to a respectable position.

But Harpreet's dismissal triggered a collapse and MP suddenly lost four wickets for an addition of just 23 runs to the total.

From 197 for five, the hosts were reeling at 220 for nine before Rameez and Ishwar Pandey ensured that MP was not bundled out on the day.

At stumps, Rameez's unbeaten knock included eight fours and a six, while Pandey was not out on 20.

For Andhra, Bandaru Ayyappa was the pick of the wickets with figures of five for 59.

Pune: Middle-order batsman Ankit Bawne cracked an unbeaten half-century to help Maharashtra score 212 in their first innings against Karnataka on the opening day of their Group A match.

He blasted eight boundaries and five sixes in his 209-ball innings but none of the batsmen could give him company for long.

Swapnil Gugale (30) and Vishant More (25) were the other top scorers for Maharashtra.

Karnataka then returned to score 50 for one in 19 overs.

At draw of stumps, Mayank Agarwal (25) and Robin Uthappa (1) were at the crease at the Maharashtra Cricket Association stadium.

Guwahati: Sayan Sekhar Mondal continued with his impressive form after being promoted to opening slot but three quick wickets pegged Bengal back as they were restricted to 191 for four by hosts Assam in an all-important final Group A league encounter.

Put in to bat, left-handed Sayan struck his third consecutive half-century, scoring a well-compiled 87 as he added 140 runs for the second wicket with another in-form batsman Sudeep Chatterjee (65).

Only 76 overs of play were possible on the day due to fading light, which is a common phenomenon in the eastern part of India.

However, the young duo could never force the pace as they batted together for 48.2 overs.

After scores of 56 and 58 against Vidarbha and Maharashtra, Sayan's 87 came off 193 balls with 10 boundaries.

Sudeep's innings was a bit more sedate as his 65 came off 151 balls with seven boundaries to his credit.

Jammu: Pacer Saurya Sanandiya returned a five-wicket haul as Saurashtra dismissed Jammu and Kashmir for a paltry 138 in their first innings and then raised 150 for two on the opening day of their Group C match.

Saurashtra openers Avi Barot (36) and Sagar Jogiyani (41) then returned to produce an 84-run first-wicket partnership to give them a good platform.

Once Barot was dismissed by Zahoor Sofi (1-22) in the 17th over and Jogiyani was removed by Sameer Ali (1-50) in the next over, Arpit Vasavada (31) and Sheldon Jackson (35) helped the team grab the first innings lead.

Vasavada and Jackson were at the crease at the draw of stumps at the Gandhi Memorial Science College Ground.

Jharkhand bundle out Hyderabad for 145

Hyderabad: Jharkhand produced a fine bowling effort to bundle out Hyderabad for a meagre 145 in their first innings on the opening day of their Group C match.

At stumps, Jharkhand were 31 for one, with opener Shiv Gautam unbeaten on 14 and Anand Singh on four.

B P Sandeep top-scored for Hyderabad with 39 runs.

Mallapuram: Himachal Pradesh were all out for 163 after bundling out hosts Kerala for 103 in their Group C match.

Opting to bat, Kerala were off to a disastrous start and kept losing wickets at regular intervals at the Perintalmanna Cricket Stadium.

Left-arm spinner Rahul Singh returned impressive figures of six for 19 for the visitors.

Himachal, too, struggled despite a better start. In the end the visitors were all out in 37.5 overs, but managed to take a first-innings lead of 60 runs.

Agartala: Rajat Paliwal struck a hundred as Services amassed 282 for five in their first innings against Tripura on the opening day of their Group C match.

Paliwal's unbeaten 178-ball 147, which was studded with 19 fours and three sixes, was cornerstone of Services innings after a top-order collapse.

Lower down the order, Devender Lochab also added 31 runs to help Services be in a reasonably good position.

For Tripura, Rana Dutta grabbed four wickets for 53 runs in his 20 overs.