A summary of the second day's play in the Ranji Trophy matches at various venues across the country. 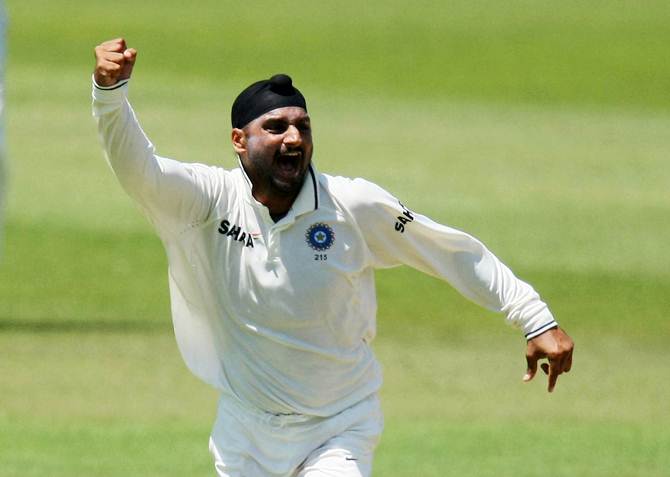 Veteran spinner Harbhajan Singh picked seven wickets in the second innings to complete a 10-wicket-haul for the match as Punjab decimated Tamil Nadu by 243 runs in Dindigul on  Wednesday and advanced to the quarter-finals of the Ranji Trophy.

After scoring 206 runs in the first innings, Punjab had bundled out Tamil Nadu for a paltry 68.

The momentum swung again as Punjab's lower order stitched together useful stands to add to an already substantial lead of 138.

Wicketkeeper Gitansh Khera, batting at No. 8, smashed a 40-ball 43, which was also the second-highest score of the match and remained unbeaten as Punjab were bowled out for 174, resulting in a lead of 312.

Requiring 313 for a place in the knock-outs, the Tamil Nadu batsmen were again found wanting on a turning track, as Harbhajan ran through the batting order and bowled out the host for 69 runs.

Mumbai: Opener Akhil Herwadkar missed out on a maiden double century by eight runs after a marathon stay, as Mumbai amassed an imposing first innings total of 531 before reducing Gujarat to 102 for three on Day 2 of the Group B match.

The left-hander occupied the crease for three minutes under eight-and-a-half hours while scoring his 326-ball 192 that included two sixes and 22 fours.

He departed 20 minutes after lunch, having commenced at his overnight score of 143 in the team’s total of 370 for two.

The opener’s patient knock was ended by Priyank Panchal.

He lost his overnight third wicket partner, Suryakumar Yadav, early in the morning after the latter added just one run to his overnight 103.

Mumbai lost wickets at regular intervals thereafter and were all out half an hour before tea.

In reply to Mumbai's huge first innings total, the visitors had a decent start, with openers Asad Pathan and Panchal (36) putting on 41 runs before losing three wickets for 12 runs in 33 balls, two of them claimed by Mumbai's pace spearhead Shardul Thakur in the space of six balls spread over two overs.

First blood was drawn by Shardul's new ball partner Balwinder Sandhu, who sent back Pathan when the left-hander poked at a ball that moved away and was caught behind.

Thakur packed off Panchal with a short ball that the latter tried to hook half-heartedly to feather a catch to wicketkeeper and captain Aditya Tare and then had Manpreet Juneja edging to the slip cordon to leave Gujarat at 53 for 3.

The medium pacer could have grabbed his third wicket in as many overs had he accepted a low return catch to his left of new batsman Bhargav Merai, who survived to remain unbeaten on 41 off 66 balls with six hits to the fence.

Thakur bowled 10 overs at a stretch, giving away 15 runs for two wickets and came back late in the day to bowl two more overs without much success.

After putting up a commendable first innings score of 444 for six, riding on Shreevats Goswami's (112) maiden first-class ton and Pankaj Shaw's well-compiled 99, Bengal had Assam reeling at 1 for 4 in four overs with another 290 runs required to avoid the follow-on.

The 31-year-old bowler also completed a personal milestone of 300 first-class wickets on Wednesday -- only the second pace bowler from the state after current bowling coach Ranadeb Bose (317) to accomplish the feat.

This is his 85th first-class match.

Dinda's 300th victim was rival captain Gokul Sharma (0), who edged one to Shreevats behind the stumps. This was after he dismissed opener Pallavkumar Das (0) with the very first delivery of the Assam innings caught by Abhimanyu Easwaran.

With the first ball off his second over, he got rid of Rahul Hazarika (1) with a fuller delivery and then with the last ball of his second over cleaned up nightwatchman Arup Das (0) to have Assam reeling at 1 for 4.

Earlier, the highlight of the Bengal innings was the 174-run partnership for the sixth wicket between Goswami and Pankaj Shaw (99), who was unlucky to miss out on his maiden hundred.

This is his fourth half-century of the season; he got a debatable leg-before decision off left-arm spinner J Syed Mohammed's bowling.

Goswami, who had an indifferent start to the season, played 253 balls and hit 11 boundaries while Shaw's four-hour effort had 10 fours and a six off 189 balls.

Pune: Maharashtra took a surprising first innings lead after bowling out defending champions Karnataka for 180 in their Group A.

Medium pacers Anupam Sanklecha, Shrikant Mundhe and Nikit Dhumal ran through the Karnataka batting with the innings ending in 67.4 overs.

Maharashtra, who had scored 212 in their first innings, were 70 for four in their second innings, 102 ahead of the visitors.

The stage is thus set for an exciting finish.

Karnataka captain R Vinay Kumar and fellow-medium pacer Sreenath Aravind struck twice to get their team back into the contest.

Trailing by 60 runs, Kerala suffered a batting collapse and were bundled out for 83 in their second innings early on Day 2, Sharma claiming 6 for 33 in 10.2 overs.

Rishi Dhawan, Karanveer Singh and Rahul Singh picked a wicket each, as none of Kerala's batsmen could score more than 20.

Himachal were set only 24 to win and they completed the formalities in the fifth over of the innings to end the Group C match inside four sessions.

The visiting side, however, made a heavy weather of the paltry run chase as they lost four wickets in the process, Kerala left-arm spinner Karaparambil Monish claiming all of them in just two overs and without conceding a run.

Monish claimed three wickets with the first, third and sixth deliveries of the fourth over. He had taken his first wicket with the fourth delivery of his first over and second of the innings.

The four-wicket haul put Monish on top of the wicket-taking chart in the Ranji Trophy this season.

Himachal secured six points from the win while Kerala got none. By virtue of the victory Himachal are virtually assured of a place in the quarter-finals with 30 points from eight matches.

The defeat put Kerala are out of the reckoning for a knock-out spot.

Hyderabad: Saurabh Tiwary scored an unbeaten 190 as Jharkhand amassed 336 for six and took a healthy first innings lead over Hyderabad in their

Replying to Hyderabad's first innings of 145, Jharkhand have already taken a huge 221-run lead by close of play on Wednesday, with four wickets still remaining.

Resuming on 31 for one, overnight batsmen Shiv Gautam and Anand Singh were out cheaply, leaving Jharkhand reeling at 48 for three.

But Tiwary came to the team's rescue with a brilliant 244-ball 190 not out that included 24 hits to the fence and four sixes.

He also put on a solid 117-run stand for the fourth wicket with Ishank Jaggi (48) and another 131-run partnership with Kaushal Singh (54) for the sixth wicket to give the visitors the upper hand.

Indore: Madhya Pradesh spinner Ankit Sharma took a 10-wicket haul in two innings as Andhra were bundled out for a mere 56 in the first innings and then finished day two on 159 for five while following on in a Group B match.

Resuming on 261 for nine, MP added 18 runs to their overnight score before being dismissed for 279 in their first innings.

In reply, the Andhra batsmen had a disastrous outing with Ankit (6-17) getting rid of the top and middle order.

None of the visiting team batsmen, except K Ashwin Hebbar (13), could reach the double-digit mark.

Following on, Andhra faltered yet again, losing five wickets in 48 overs with Ankit (4-65) doing the bulk of the damage this time around as well.

However, skipper Mohammad Kaif played a responsible knock of 51, while DB Prasanth Kumar (49) and AG Pradeep (36 not out) also chipped in with crucial runs to keep Andhra afloat.

At stumps, NJ Sai Krishna (13 not out) was at the crease along with Pradeep.

Jammu: Sheldon Jackson (121) blasted a strokeful century to power Saurashtra to a mammoth 491 for nine in their first innings against Jammu and Kashmir on the second day of their Group C match.

Overnight batsman Jackson hit 11 fours and seven sixes in his 142-ball innings, while No. 9 batsman Jaydev Unadkat scored 91 not out, including nine boundaries and four sixes, as Saurashtra took a 353-run lead.

At draw of stumps, Unadkat was at the crease with Dharmendrasinh Jadeja (38).

Resuming at the overnight score of 150 for 2, Saurashtra added another 341 runs, riding on some useful contributions from Samarth Vyas (53) and Chirag Jani (36), besides Jackson and Unadkat.

Greater Noida: Umang Sharma hit an unbeaten half-century but the pace duo of Munaf Patel and Irfan Pathan claimed two wickets each to reduce Uttar Pradesh to 134-5 against Baroda in their Group B match.

At the draw of stumps, Umang (74) was at the crease along with Eklavya Dwivedi (0), with Uttar Pradesh still trailing by 187 runs and five wickets remaining in their first innings.

While Ambati Rayudu (70) could not add to his overnight score, Irfan (48) missed his half century by a whisker.

Pinal Shah (38) contributed down the order but the rest of the batsmen were dismissed cheaply.

In reply, Uttar Pradesh found the going tough as they lost wickets at regular intervals and were looking down the barrel at 133 for five in 47 overs.

Amit Mishra (4), who had played for Rajasthan Royals, opened the innings but he was cleaned up by Patel in the fourth over.

The other opener, Himanshu Asnora (10), too was back in the hut soon after he was caught by Shah in the 14th over.

Almas Shaukat (19) too returned to the pavilion in the 28th over when he was dismissed by Yusuf Pathan, while Suresh Raina was caught and bowled by Irfan.

Umang and Akshdeep Nath then added 55 runs before the latter was removed by Bhargav Bhatt.

Jaipur: Rajasthan require another 152 runs to beat Odisha, as 16 wickets fell for the second consecutive day in the Group A match.

Rajasthan, left reeling overnight on 28 for 6, were bowled out for 51 in response to Odisha's 151 on the opening day.

Later on Day 2, Odisha were shot out for 129 before the hosts did well to score 79 for 2, thanks to an unbeaten 56 by Puneet Yadav.

Vidarbha amass 504 for 7 against Haryana

Nagpur: Ravi Jangid and Aditya Sarwate hit a century each down the order as Vidarbha scored a massive 504 for 7 declared against Haryana in the first innings of their final Group A match.

Jangid (110) and Sarwate (103 not out) stitched 212 runs for the seventh wicket to demoralise the Haryana bowlers after the home side resumed the day at 284 for 6 at the Vidarbha Cricket Association Ground.

Jangid, who resumed the day on one, added 109 runs as he hit nine fours and three sixes in his 182-ball knock.

Sarwate hit 10 fours and a six in his 218-ball unbeaten innings.

On Day 1, opening batsman Faiz Fazal smashed a 266-ball 126 to lay the foundation for the huge Vidarbha total.

In reply, Haryana were 53 for no loss from the 25 overs they faced on Wednesday, with openers Nitin Saini and Chaitanya batting on 25 and 18 respectively.

Haryana trail by 451 runs with all 10 first innings wickets intact.

Vidarbha need an outright win to book a place in the knock-outs for the second-year running.

They can still hope to scrape through by virtue of the first-innings lead if a host of other results go their way.

Bottom-placed Haryana, on the other hand, are out of contention for a knock-out berth with just six points from seven matches.