Captain Gautam Gambhir led from the front with a gutsy century to lift Delhi to 260 for six at stumps on the first day of their opening Ranji Trophy match against Saurashtra, in New Delhi, on Sunday.

Gambhir was unbeaten on 123 from 270 balls, having shared a 88-run stand for the fifth wicket with another veteran Rajat Bhatia (47) at stumps on Day 1.

Virender Sehwag, batting at No. 4, failed with the bat as he was run out for 9, while Unmukt Chand's (28) downfall came due to atrocious shot selection.

Varun Sood (14), who was surprisingly promoted to No. 3, was done in by a short ball from pacer Sudeep Tyagi, who took two for 45 in 19 overs.

But the day belonged to veteran Gambhir, who registered his 38th first-class century, and gave Delhi a slight advantage despite the regular fall of wickets through the day.

The left-hander started off cautiously and looked a bit uncomfortable against Saurashtra pace duo of Sudeep Tyagi (2/45) and Abhishek Bhatt (2/52) in the first few overs, but grew in confidence as he spent time at the wicket. His six hour vigil included 14 boundaries and two sixes.

He got a lifeline on 27, when he came down the track to off-break bowler Kamlesh Makvana and was beaten but wicketkeeper Sagar Jogiyani failed to carry out an easy stumping.

However, veteran Sehwag had a disappointing day who was run out after a misunderstanding with Gambhir as the duo tried to steal a third run. It was Sehwag, who was coming back at the striker's end but his desperate dive couldn't beat Sheldon Jackson's direct throw from the deep.

Vaibhav Rawal also perished cheaply for 11 to leave Delhi in a spot at 145 for four before Gambhir found perfect partner in Bhatia. Both were hardly bothered by Makvana and left-arm spinner Dharmendra Jadeja.

Jammu and Kashmir shocked 40-time champions Mumbai by bundling them out for a meagre 236 in the first innings on the opening day of their Ranji Trophy Group A game in Mumbai.

Further tightening the grip, the visitors reached 88 for one at stumps to take away the opening day's honours. Opener Shubham Khajuria (47) and one-down batsman Bandeep Singh (34) were at the crease at the end of day one.

Opting to bat, Mumbai raced to 50 in less than 10 overs with debutant openers Kevin Almeida (19) and Bravish Shetty (35) playing positively.

However, a disciplined bowling effort from the visiting team's medium pacers applied the brakes at regular intervals to pack off the fancied Mumbai batsmen and skittle them out for 236 in 61 overs at the stroke of tea.

Ram Dayal was the pick of the bowlers with figures of three for 51 from his two eight-over spells. He was ably supported by impressive left arm spin from Waseem Raza (3/29) that brought Mumbai to their knees.

Mumbai were undone by some excellent wicket to wicket bowling by mainly Dayal -- among the new ball bowlers -- and teasing flight by Raza.

For Mumbai, skipper Suryakumar Yadav top-scored with a quickfire 55-ball 57. But it was some lusty late order hitting by Dhawal Kulkarni, who made a quick unbeaten 42 off 61 balls inclusive of four sixes and one four, that helped Mumbai's cross 200.

J&K skipper Parvez Rasool, who came on to bowl after the 45th over, picked up two tailenders while the other two medium pacers Samiullah Beigh, who was hit for six fours in two overs by Shetty in his first spell, and Umar Nazir got one each.

J&K began their reply poorly when opener Adil Reshi was caught at long leg by Kulkarni, hooking a short ball from Shardul Thakur, but then had a slice of luck when the same bowler put down next man Bandeep Singh in the same over.

Yuvraj scores 59 but Haryana bundle out Punjab for 273

India discard Yuvraj Singh's 59 was the only saving grace for Punjab as a six-wicket haul by off-spinner Jayant Yadav helped Haryana bundle them out for a mere 273 in their first innings on Day 1 of their Ranji Trophy Group A match in Patiala.

At stumps on day one, Haryana were 19 for one with Abhimanyu Khod (10) and Yuzvendra Chahal (1) at the crease.

The spin duo of Yadav (6/85) and Amit Mishra (3/72) wreaked havoc as they shared nine wickets between them to skittle out Punjab cheaply after they had opted to bat.

Yuvraj top-scored with a 99-ball 59 with the help of six boundaries and a six, and also shared a valuable 84-run stand with Gurkeerat Singh (43) for the fifth wicket as Punjab looked set for a respectable total.

But Yuvraj's dismissal triggered a collapse and from 241 for six, Punjab could add just another 32 runs, losing four wickets in the process to be all out for 273.

In reply, Haryana lost Avi Barot's (8) wicket cheaply but Khod and Chahal ensured there was no further damage.

Chidambaram Gautam top scored with a fluent innings of 94 to help Karnataka recover and post a respectable 290 against Tamil Nadu on day one of their opening Ranji Trophy match in Bangalore.

In reply, Tamil Nadu were 22 without loss at stumps with Abhinav Mukund on 10 and Kaushik Gandhi on 12.

Gautam, who missed his century by six runs, and Kunal Kapoor (87), gave respectability to the hosts' total after they were struggling at 97 for five at one stage.

Medium pacers Jagannathan Kaushik and M Mohammed were pick of the bowlers with figures of four for 53 and three for 80, respectively. India discard Laxmipathy Balaji finished with two wickets for 50 runs.

The cream of Karnataka batting, including Robin Uthappa, Manish Pandey and Stuart Binny perished cheaply as Karnataka struggled in the morning session.

First to go was Uthappa, who was caught behind by wicketkeeper Dinesh Karthik off Laxmipathy Balaji for 14 and soon after Mayank Agarwal also perished for nine.

Kaushik once again rattled the Karnataka innings with twin strikes as he sent back the promising Karun Nair (9) and Binny (7) cheaply.

Resuming their innings after lunch at 129 for five, Karnataka's innings was steadied by Kunal Kapoor, who made a brilliant 87, in company of Gautam.

Young left-hander Sudeep Chatterjee and Shreevats Goswami hit half-centuries to lift Bengal to a respectable 255 for three against Baroda in the Group A encounter of the Ranji Trophy, in Vadodara.

Sudeep was unbeaten on 91, while Goswami was 61 not out as the duo were involved in an unbroken stand of 111 runs for the fourth wicket to rally Bengal after they were struggling on 144 for three at one stage.

In-form Bengal skipper Manoj Tiwary suffered a rare failure when he was trapped leg-before with an incutter by veteran seamer Munaf Patel for seven.

Sudeep with a lot of maturity as he hit eight boundaries in the 165 balls he faced. Even, the pint-sized Shreevats curbed his natural aggression to score 61 off 128 balls with nine boundaries.

They occasionally attacked part-time spinner Yusuf Pathan but were more intent on taking the singles to keep the scoreboard moving. Sudeep hit some glorious drives on the up and was in a mood punish anything that was pitched on his legs.

Bengal were off to a cautious start by their opening pair of Arindam Das (54) and Rohan Banerjee (35), who consumed 30 overs for their stand of 78 runs. 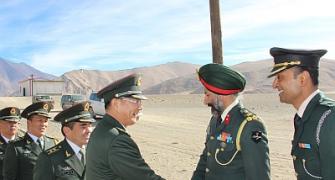 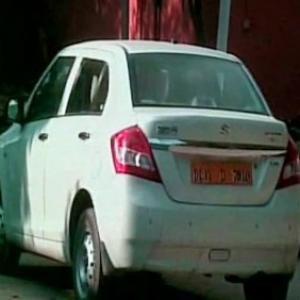