A summary of the opening day's play in the Elite Group Ranji Trophy matches across the country. 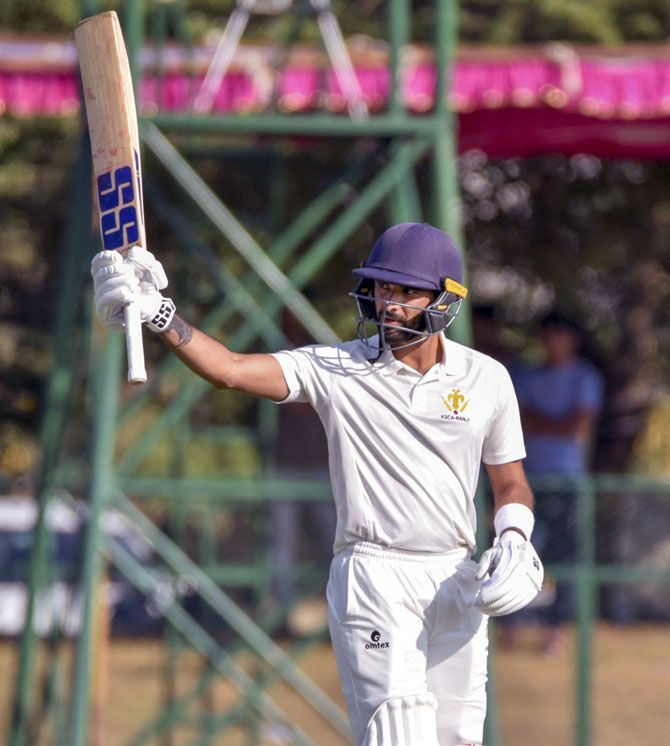 IMAGE: Karnataka batsman Siddharth K V raises his bat after completing his half-century during Ranji Trophy match against Madhya Pradesh, at the KSCA stadium in Shivamogga, on Tuesday. Photograph: PTI

Saurashtra's slow left-arm orthodox bowler Dharmendrasinh Jadeja snared five wickets to leave Mumbai tottering at 249 for 8 on the opening day of their Elite Group B Ranji Trophy match, in Rajkot, on Tuesday.

Had Sarfaraz Khan not rescued Mumbai yet again after a top-order collapse, scoring 78, the 41-times Ranji champions would have been in an even more precarious position in what is a must-win game for them.

Opting to bat at the SCA stadium, Mumbai openers Bista and Lalwani (25) failed to convert good starts. The duo put up 62 for the first wicket before Bista was trapped in front of the wicket by Jadeja.

Senior-pro Suryakumar Yadav fell for a first-ball duck after being trapped in front of the wicket by Prerak Mankad, as Mumbai were in a spot of bother at 63 for 2. Soon, it became 74 for 3 after Jadeja removed Lalwani, who gave a sitter to mid-off.

Crisis man Siddhesh Lad (13) had on several occasions in the past taken his team out of the rubble, but failed to do so on Tuesday. He became Jadeja's third's victim after the bowler trapped him in front of the wicket to leave the visitors teetering at 88 for 4.

Sarfaraz, who guided his team out of trouble in the last two matches, again played a matured and responsible knock. However, after doing all the hard work, he fell for 78, cleaned up by Kamlesh Makwana.

Aditya Tare (10) was dismissed cheaply as he became Jadeja's fourth victim. Mulani held one end and completed his fourth fifty after tapping Jadeja for a single.

However, Mulani fell short of partners as Vinayak Bhoir (21) and Shashank Attarde (0) also fell in quick succession as Saurashtra took honours on day 1.

Earlier, the Saurashtra Cricket Association felicitated senior speedster Jaydev Unadkat for taking 300 scalps in first-class cricket. Unadkat, however, missed the game due to a niggle.

New Delhi: All-rounder Kunwar Bidhuri and the talented Himmat Singh struck fighting half-centuries to rescue Delhi from a precarious position as the hosts reached 270 for 6 against Gujarat on the first day of their Ranji Trophy Group A encounter.

At one stage Delhi were staring down the barrel at 136 for 5, with only opener Hiten Dalal (69 off 130 balls) looking comfortable against the Gujarat attack.

Pacer Arzan Nagaswalla (3/54 in 18 overs) was the pick of the Gujarat bowlers while seasoned Axar Patel (1/60 in 18.3 overs) did the most important job of dismissing Himmat off the last ball of the day.

The right-hander, who showed tremendous patience during his 153-ball stay went for a drive but the edge landed in Rujul Bhatt's hands in the slip cordon.

This was after he had hit eight fours and a six during his knock.

Kunwar, who scored his maiden half-century, was more attacking of the two, hitting 11 fours and a six.

In the morning, opener Anuj Rawat (4) was trapped leg before by left-arm seamer Rush Kalaria (2/58 in 22 overs) but skipper Dhruv Shorey (28) and Dalal added 73 for the second wicket.

With Delhi looking in control, pacer Nagaswalla dealt a twin blow getting Shorey leg-before and breaching through his deputy Nitish Rana's (0) defence in successive overs.

At 79 for 3, there was another stand of 49 between Dalal, who hit 10 fours and Jonty Sidhu (18). But in the post-lunch session, Nagaswalla got his third wicket as Jonty edged one to Samit Gohel in the slips.

Dalal, who faced 130 balls, suddenly had a rush of blood as he tried to hook an innocuous Kalaria bouncer to be caught by the only man Nagaswalla stationed behind square.

After that Himmat and Kunwar held the innings together and gave Delhi an opportunity to fight and remain in the match.

Haryana in command after bowling Assam out for 97

Rohtak: Haryana gained the upper hand on an eventful opening day of their Ranji Trophy Group 'C' match against Assam, taking a 101-run lead after bundling out their opponents for 97 in the first innings.

Captain Harshal Patel's decision to bowl after winning the toss paid dividends as he and left-arm spinner Tinu Kundu (5/35) wrecked the Assam batting line-up, making good use of the conditions. Medium-pacer Patel, who has been key for Haryana this season, finished with 4 for 32.

Opener Kunal Saikia (17) and one-down batsman Rishav Das (13) defied the Haryana attack for a while but once Kundu dismissed the latter, Assam kept losing wickets at regular intervals.

The talented Riyan Parag, on whom a lot depended, was leg-before wicket to Kundu for a duck.

Rajjakuddin Ahmed (35 not out) hit six fours and a six in his aggressive 34-ball knock that helped Assam get close to 100.

In reply, Haryana looked in trouble having lost half the side for 65 before a defiant 76-run partnership between Chaitanya Bishnoi (46) and R P Sharma (59) sparked a revival.

Bishnoi was very watchful to begin with but opened up later to play some attractive shots and hit two big sixes.