A round-up of Day 1 of the Ranji Trophy matches played on Thursday. 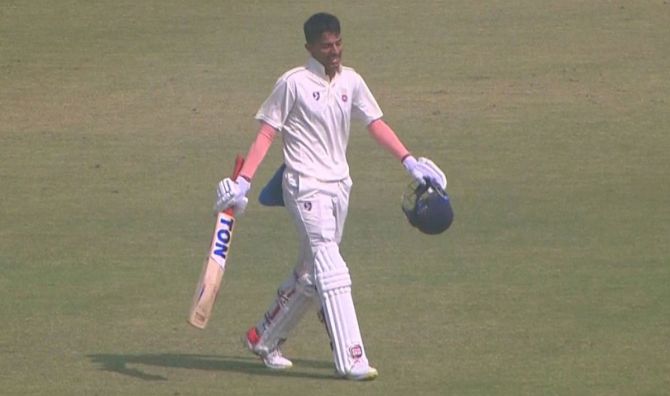 IMAGE: Delhi's Yash Dhull celebrates after completing his century on debut, on Day 1 of the Ranji Trophy match against Tamil Nadu in Guwahati on Thursday. Photograph: BCCI Domestic/Twitter

India's U-19 World Cup-winning captain Yash Dhull made a seamless transition into senior cricket with a superbly crafted debut hundred as Delhi scored 291 for seven against Tamil Nadu on the opening day of their Group H Ranji Trophy game in Guwahati.

Dhull, sent in an unfamiliar opening position in his first ever first-class game, struck 113 off 150 balls with as many as 18 boundaries, but more importantly, resurrected the innings after Sandeep Warrrier (2/69) removed veteran Dhruv Shorey (1) and young Himmat Singh (0) in quick succession.

Infact, there were square cuts and square drives whenever he got width outside the off-stump and he would roll his wrists adequately to keep the pull shots down when peppered with short deliveries.

While spinners -- left-arm orthodox Ravisrinivasan Sai Kishore and part-time off-break Baba Aparajith (2/63) -- didn't get much purchase from the track, Dhull did occasionally come out and hit them over the top to get his quota of fours.

Such was the ferocity of his attack that at one point, Tamil Nadu skipper Vijay Shankar deployed a deep point to just cut the boundaries and then the youngster milked the bowling for singles.

He had a reprieve on 97 when Mohammed had him caught at short midwicket after he failed to keep a pull shot down but replays showed that the pacer had overstepped.

Sidhu gave him good support with his steady defensive game. Once Dhull was trapped leg before by Mohammed and Sidhu also departed, Delhi slipped to 253 for seven before Lalit Yadav (45 not out) and Simarjeet Singh (16 not out) added 38 for the eighth wicket. His Test career at stake, beleaguered India batter Ajinkya Rahane compiled a much-needed century to keep himself in India reckoning while guiding Mumbai to 263 for three against Saurashtra in their Ranji Trophy opener in Ahmedabad.

Electing to bat after winning the toss, Mumbai were also boosted by Sarfaraz Khan's unbeaten 121 off 219 balls on the first day of their Elite Group D match.

The focus was, however, firmly on Rahane who ended the day on 108 not out from 250 deliveries.

The 33-year-old Rahane, who had a mediocre Test series against South Africa recently, completed his century from 212 balls, hitting 14 fours and two sixes.

The senior batter had managed just 136 runs in six innings in India's 1-2 defeat in the Test series in South Africa earlier this year.

With Test series against Sri Lanka set to be played from first week of March after the T20s starting February 24, this century will provide the confidence that he needs and could ensure that he retains his place in the Indian team.

Another struggling India veteran, Cheteshwar Pujara, who is playing against Rahane in this match, will also look to get a big knock in the game to ensure the national selectors retain him for the series against Sri Lanka.

With new ball bowlers Jaydev Unadkat and Chetan Sakariya operating well, Mumbai found themselves in trouble early on, losing openers Aakarshit Gomel (8) and Prithvi Shaw (1) with just 22 runs on the board.

However, Saurashtra failed to make any more inroads after that as Rahane and Khan added 219 runs for the fourth wicket to put their side in a comfortable position at stumps.

Rahane took his time before starting to play freely and got to his 36th first-class hundred in 212 balls.

The former India Test vice-captain got to 99 with a big six against left-arm spinner Dharmandrasinh Jadeja, before getting to the three-figure mark with a single.

Rahane's 479 Test runs in 2021 came at an average of 20.82, leading to his sacking from the vice-captain's post ahead of the tour of South Africa.

Ishan Porel was the wrecker-in-chief grabbing 4/40 as Bengal pacers shared bulk of spoils to bundle out Baroda for a paltry 181 on day one of their elite Group B Ranji Trophy fixture at the Barabati Stadium in Cuttack.

In reply, Bengal were 24/1 at stumps on day one with the two Sudips -- opener Gharami (11 not out) and one drop Chaterjee (9 not out) at the crease after skipper Abhimanyu Easwaran (4) was dismissed early in the fifth over.

Put into bat, Baroda got off to a steady start with skipper Kedar Devdhar (31) surviving early on after being dismissed off an Akash Deep no-ball.

But the lanky Porel triggered the collapse in the 15th over, with his twin blows of Devdhar (23) and Pratyush Kumar (0) in the space of three balls.

On a roll, Porel picked his third in the form of Shivalik Sharma (4) in his next over to reduce Baroda to 47/3.

Just when Baroda looked to get going with Krunal Pandya forming an alliance with keeper-batter Mitesh Patel, Akash Deep once again made further inroads.

Mukesh Kumar ripped through the lower order to finish with 3/33. For Baroda, Mitesh top-scored with a 104-ball 66, while Bharghav Bhatt remained not out on 30.

"The plan was to get as many wickets in the first two and a half hours; the wicket was helping the seamers. Afterwards the wicket became slow, low and flat," Porel said.

"We have bowled well as a unit. Mukesh, Akash bowled well. When we got a breakthrough, wickets came in a cluster. For me, the first wicket of Devdhar was very crucial as earlier he was caught off a no-ball.
Overall, it was a good day at the office. Ranji trophy resumed after two years and it feels good to be back in red ball cricket," Porel said.

Skipper Manish Pandey's blistering 156 and K V Siddharth's unbeaten 140 helped Karnataka score an imposing 392 for 5 at stumps on the opening day of the Ranji Trophy Group C match against Railways in Chennai on Thursday.

Sent in to bat, Karnataka saw India Test batter Mayank Agarwal fall early when he was run out for 16. The talented left-hander Devdutt Padikkal looked to be settling down before falling to Railways medium pacer Yuvraj Singh for 21.

One-drop batter R Samarth (47) and Siddharth (140 not out off 221 balls) added 60 runs before the former was dismissed by Avinash Yadav. The Railways bowlers did not know what hit them as Siddharth and Pandey went on the rampage.

The experienced Pandey, in particular, was severe on the opposition bowlers, hitting 12 fours and 10 sixes during his 121-ball innings. He hammered three sixes in one over off Avinash Yadav. In fact, he reached his ton with a six off pacer Amit Mishra.

The 267-run partnership between Pandey and Siddharth from 283 balls piled the pressure on the Railways bowlers. From 106 for 2 in 34 overs, the Karnataka batters raised the tempo with the captain toying with the opposition bowling.

The final session of the day saw Karnataka rack up 140 runs before the Railways bowlers stemmed the flow by sending back Pandey and Sharath before stumps.

Pandey, who was batting on 76 at tea, went after the bowling and moved to 156 and looked good for a mammoth score. However, spinner Shivam Chaudhary (2 for 22) got the prize wicket of the opposition captain, having him caught by Yuvraj.

The right-handed Siddharth was unbeaten on 140 at stumps and will hold the key to Karnataka swelling its total further on the second day.

Siddharth played a superb knock, which was overshadowed by Pandey's all-out attack. Like his skipper, he too reached his century with a six, off left-arm spinner Avinash. He has so far hit 17 fours and two sixes.

In the other match in the group, domestic veteran Paras Dogra made a workman-like ton as Pondicherry reached 309 for 6 at stumps against Jammu and Kashmir for whom new pace sensation Umran Mallik picked up 3 for 79.

Opener Pawan Shah slammed a sublime 165 on debut to guide Maharashtra to 278 for five on the first day of their Elite Ranji Trophy group G game against Assam in Rohtak.

The 22-year-old Shah, who hails from Chinchwad and is a product of the Varroc Vengsarkar Cricket Academy, was the cynosure of all eyes at the Chaudhry Bansi Lal Stadium as he took on a pedestrian Assam attack with gusto.

The right-handed batter hit 15 boundaries and one maximum in his 275-ball unbeaten knock.

Put into bat, Maharashtra lost opener Yash Nahar (4) and Rahul Tripathi (2) to find themselves in a spot of bother at 32/2.

But Shah found an able ally in captain Ankit Bawne (27) and the two rallied the innings with their 66-run stand for the third wicket. After Bawne became right-arm pacer Mukhtar Hussain's second victim, it was Shah, who held the innings together.

Meanwhile, Shah was joined in the middle by seasoned campaigner Naushad Shaikh but after reaching 28, the latter got out. However, Shah kept on playing his shots at will, frustrating the opposition attack while proving his mettle at the big stage.

Maharashtra lost Shaikh and wicketkeeper Vishant More (16) in quick succession, but Diyyang Hinganekar (36 not out) played the perfect second fiddle to Shah, the duo adding 94 runs for the sixth wicket to prop up their team.

Himachal fight back against Punjab

Himachal Pradesh overcame a shaky start with half centuries from skipper Ankit Kalsi, Akash Vasisht and Raghav Dhawan to notch up 324 for 6 on the opening day of their Ranji Trophy Elite Group F match against Punjab in New Delhi.

Opting to bowl, Punjab reduced Himachal to 21 for 2 inside 10 overs with their new-ball bowlers Arshdeep Singh and Baltej Singh dismissing openers Prashant Chopra (13) and Abhimanyu Rana (3) in successive overs.

Skipper Ankit Kalsi then steadied the Himachal ship with Raghav Dhawan as they negotiated Punjab bowlers at ease to see through the first session at the Arun Jaitley Stadium.

The duo put together 139 runs for the third wicket with Raghav scoring a 125-ball 73 before being run out by Abhishek Sharma.

Kalsi followed soon after, being trapped by Gurkeerat Singh in the 57th over but Himachal got going with Akash Vasisht remaining unbeaten on 78.

He shared 95 runs with Nikhil Gangta (45) as Punjab got a strong resistance from Himachal lower-order batters.

The 28-year old Stephen, who struck in the very first over by dismissing opener Yash Kothari for 4, ran through the Rajasthan batting line-up to give his side the advantage.

Rajasthan batsmen got starts and Rajesh Bishnoi (54) did well to come up with a strokeful half-century (42 balls, 4X4, 3X6). Skipper Ashok Menaria and Aditya Garhwal contributed 40 and 49 respectively.

Menaria and Garhwal added 63 runs for the fourth wicket to help steady the Rajasthan innings before Bishnoi and Anirudh Singh (39) came up with a 76-run stand for the sixth wicket to add to the total.

The departure of Anirudh, caught and bowled by Stephen, led to three wickets falling in the space of six runs.

Bishnoi's attacking ways helped Rajasthan take the score past the 250-mark before Tanveer Ul-Haq and Aniket Choudhary added 22 runs for the last wicket as the team folded for 275 in 59.2 overs.

In reply, Andhra suffered an early jolt, losing C R Gnaneshwar for just 1 off pacer Anikey Choudhary. U M S Girinath (36 batting) and Karan Shinde (23) were involved in a 58-run stand for the second wicket.

Choudhary struck again by having Shinde caught by Garhwal. Manish Golamaru (2 batting) was the other not-out batsman.

In the other match of the group, Uttarakhand bowled out Services for 176 in 78.4 overs and ended the day at 25 for 1, losing captain Jay Bista for a duck. 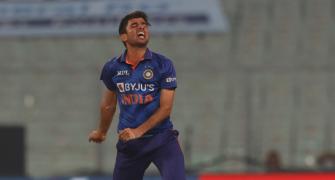 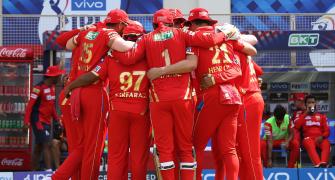 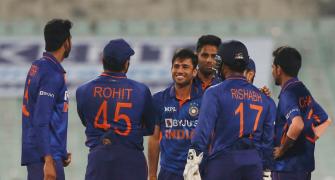 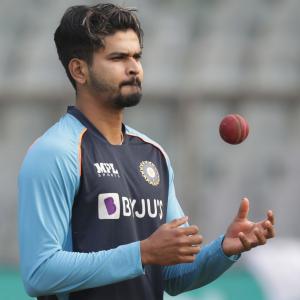 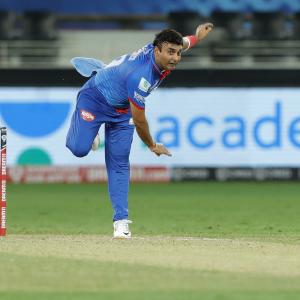 I am not finished yet: Amit Mishra