Fight on for 1st innings lead after Saurashtra restrict Mumbai 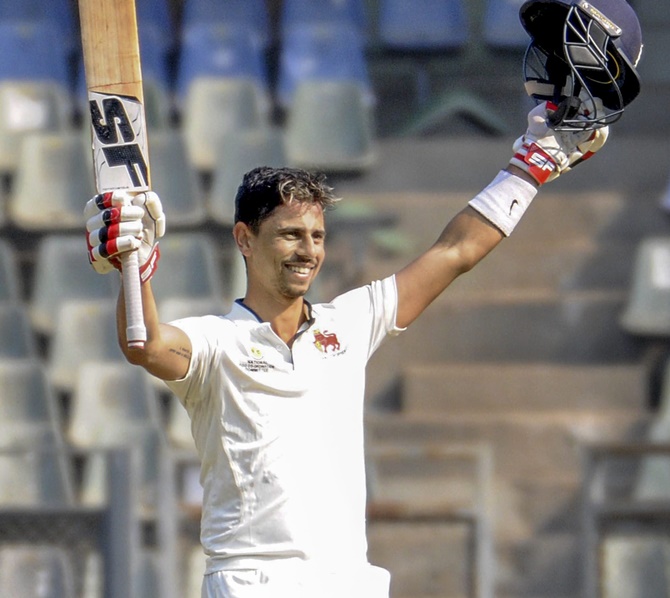 Table toppers Saurashtra and former champions Mumbai were involved in a keen tussle for the first innings lead on day two of their Elite Group 'A' Ranji Trophy match at the Wankhede Stadium, in Mumbai, on Sunday.

Saurashtra bowled out Mumbai for 394 in the first innings in the morning and then replied with 213 for five wickets at close,still adrift of the home teams total by 181 runs after weathering an early collapse that saw them slumping to 37 for three.

Mumbai struck in the final over by picking up the prize wicket of Saurashtras experienced batsman Sheldon Jackson, who was out five short of a well-deserved century after facing 144 balls in which he struck 8 fours and 3 sixes.

At stumps, Prerak Mankad (56 in 106 balls) was at the crease after putting on a stand of107 runs for the fifth wicket with Jackson who was dismissed by Minad Manjrekar with the penultimate ball of the 65thover.

Dias and Manjrekar have shared four wickets among themselves with all-rounder Dube picking up the other Saurashtra wicket to fall.

In the morning, Saurashtra captain Jaydev Unadkat and his new-ball partner Chetan Sakariya polished off the bottom half of the Mumbai first innings for 60 runs in 18 overs after Mumbai resumed at the overnight 334 for 5.

The Mumbai all-rounder had added just five to his last evening score when he fell that broke the stubborn sixth wicket stand between him and skipper Siddesh Lad, not out 84 overnight, after the addition of 112 runs.

Sakariya took out Akash Parkar, while Unadkat got rid of Tanush Kotian in successive overs to leave Mumbai at 362 for 8.

Lad completed his well-deserved century but was ninth out for 108, falling to Sakariya, after facing 146 balls and hitting 1 six and 16 fours.

Dias, with his left-arm medium pace, then brought cheers to the Mumbai ranks by striking twice in successive overs to pack off Saurashtra opener Harvik Desai and no. 3 Vishvaraj Jadeja.

Another medium pacer Manjrekar picked up a fine return catch to dismiss Snell Patel to leave the visitors tottering at 37 for three.

Saurashtras mainstay Jackson and Arpit Vasavada (20) stemmed the rot with a stand of 69 when the latter chased a wide ball from Dube and nicked to keeper Aditya Tare.

Jackson, playing fluently till he was hampered by hamstring trouble, and Prerak Mankad, who has hit 10 fours, held the Mumbai hopes at bay with a stubborn partnership till the former departed in the last over to provide Mumbai a shot in the arm going into Day 3 of the four-day match.

Meanwhile at Shimoga, hosts Karnataka secured crucial first innings lead as they bundled out Railways for 143 in their first essay.

Karnataka were 41/0 in the second innings as their overall lead stood at 112 runs at close of play.

At Raipur, Chhattisgarh took the first innings lead with Amandeep Khare (108) and Ajay Mandal (106 not out) hitting centuries.

The duo not only pulled the home team out of trouble but also ensured that they went past Maharashtra's first innings total of 239.

At Nagpur, for hosts Vidarbha, veteran Wasim Jaffer slammed 125 as they ended the second day at 238/3 against Gujarat, still adrift by 83 runs.

Wicket-keeper batsman Anuj scored 134 off 183 balls as Delhi scored 261 in their first innings in reply to MP's modest 132.

A first innings lead of 129 may well ensure full points for the home team.

The day belonged to left-handed Anuj, who played by far the most impressive innings of his nascent career so far.

The way he attacked under pressure, Rawat felt the pinch having missed out on an IPL contract.

"The innings came a few days late," he smiled sheepishly.

"I felt bad but IPL snub has taught me that I need to work a lot harder. This is by far my best innings in senior cricket," said the former India U-19 keeper.

Once Lalit was dismissed, Rawat found an able ally in Shivam Sharma (39), adding 118 runs for the seventh wicket.

Once Delhi got the lead, Rawat batted more freely hitting on both sides of the wicket.

He repeatedly reverse-swept leg-spinner Mihir Hirwani off the rough and for good measure hooked Kuldeep Sen for a six. He also hit a couple of sixes off left-arm spinner Kartikeya Singh.

Rawat is now getting a longer rope as Rishabh Pant is busy on national duty.

"Even if Rishabh Pant comes back, I want to score as many runs so that I can be picked purely as a batsman," said Rawat.

Another former U-19 player, who hogged limelight during the first half was Avesh, who is having a dream Ranji season so far with close to 35 wickets.

"The key to my success has been workload management. The support staff is ensuring that I don't bowl too much in the nets and have kept me fresh for matches," said the Delhi Daredevils pacer, who wasn't picked for India A this year."

"The selection is not in my hands, performance is and that's what I am focussing on," he said.

Ankit R Kalsi (99) closed in on his third first class century as Himachal Pradesh put up a strong batting show to extend their lead to 117 after ending day two of their Ranji Elite Group B fixture against Tamil Nadu at 340 for five, in Dharamsala.

Raghav (191 balls, 11X4) held firm after the hosts resumed at 25 for 1, as the visitors looked to pick up quick wickets. G K Singh (8) was the first to go this morning as T Natarajan had him caught by B Indrajith.

Ankush Bains fell after after putting on 26 runs with Dhawan as he was bowled by Abhishek Tanwar for 8 to leave HP at 57 for 3.

Opener Raghav and N R Gangta (43) forged an important partnership for the fourth wicket to steady the ship. They added 74 runs in over 23 overs.

The exit of Gangta brought Raghav and the left-handed Kalsi together. They started cautiously but grew in confidence to thwart the Tamil Nadu bowlers. Their 90-run association for the fifth wicket brought the host back into contention as the TN bowlers tried hard to pull things back.

Later, the unbroken 119-run stand between Kalsi and Rishi, who has featured in ODIs and a T20 International for the country, took the game away from Tamil Nadu

After a period of circumspect batting, Kalsi and Rishi, especially the latter, took the attack to the rival camp.

Tamil Nadu skipper Indrajith tried seven bowlers but the HP batsmen were more than adept in handling their challenge.

Manipur crushed Arunachal Pradesh by 112 runs to wrap up the issue inside one and a half days in an early finish to their Ranji Trophy Plate Group fixture, in Kolkata.

A day after 23 wickets tumbled at the 22 Yards School of Cricket Ground at Saltlake, Manipur made 253 in their second essay to set a 273-run target for Arunachal Pradesh.

Shot out for their lowest total of 66 in the first innings, Arunachal Pradesh put up another insipid show with the bat to fold for 160, succumbing to their fifth defeat in six matches.

That their no 11 batsman Deendyal Upadhyay top-scored for 52 summed up the batting plight of Arunachal Pradesh.

The Arunchal Pradesh frontline seamer Upadhayay stood in their highest partnerhsip of 74 runs with Licha Tehi (26 not out) before being cleaned up by Thokchom Singh.

This was Manipur's third victory from six matches as they have 18 points, while Arunachal Pradesh who are yet to win a match have three points.

Earlier, resuming the day on 192/3 on a breezy Sunday morning, Manipur lost wickets at regular intervals and could add just 61 runs to their overnight total.

Debutant opener Hrithik Kanojia, who was overnight 79, missed a century by nine runs after being dismissed by Licha Tehi (3/74).

"I should have stayed longer. But luckily for us Arunachal Pradesh did not do well in the second innings too. I am happy that we won. But a century on debut would have been special," the 19-year-old from Delhi said.

Kanojia's 98-run partnership with captain Yashpal Singh (51) on the first day was a game changer in the low-scoring fixture.

"I think that was the turning point. Till then it was anybody's match," he added.

Thokchom Singh who clinched a careerbest 5/16 in the first innings for a match haul of seven wickets was adjudged man-of-the-match. Singh also chipped in with valuable 19 and 18 runs in the low-scoring tie.

Manipur coach Shiv Sundar Das said it was good to bounce back with a win after being bundled out for 88 in the first innings.

"The first two sessions on Friday was difficult. They have just started and have no experience of playing under these trying conditions. It's a good learning curve for the boys. Also Hrithik (Kanojia) and Yashpal Singh's partnership played a huge role. Hrithik batted really well and I am very happy for him," he said.

Surprised that the match ended before tea on the second day, Das said: "It came as a surprise. But we will not complain."

In Puducherry: Puducherry vs Uttarakhand. No play.